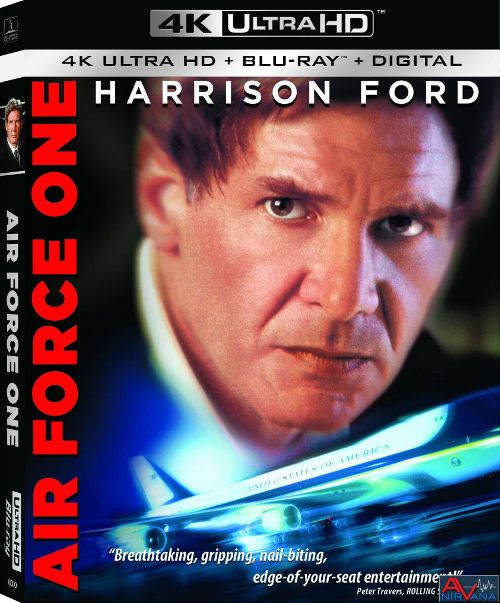 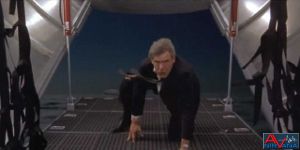 Movie
Harrison Ford has done it all. He’s saved a galaxy a long time ago, he’s fought Nazis, he’s been in the CIA, and he’s naturally been the most powerful man on earth. The President of the United States. Back in the late 90s the man was maturing past his youthful charm, but he was still a powerful cinematic draw during that time period. It wasn’t until about 2002-2003 that his star power started to fade and he slid back into supporting roles (except for 2008’s ill fated Indiana Jones and the Kingdom of the Crystal Skull), so when he did Air Force One it was really his last big hurrah as the macho action hero. I still remember sneaking the VHS into my house (I wasn’t allowed to technically watch R-rated films till I was a few years older) and watching the film when my parents went to bed. It had it all. Guns, non stop action, Harrison Ford saying cool one liners like “Get off my plane!” before killing the bad guy, and I couldn’t get enough. Fast forward 21 years in the future (ugg, I just realized how old I’m getting) and Sony brings forth an absolutely stellar 4K UHD disc, pulled from a new 4K master, and an enhanced audio track that will leave any home theater enthusiast absolutely thrilled.

Of all the Die Hard clones, Air Force One is one of my favorites. It was the end of an era (literally, just a few years until a new century), and one of the last remaining great 90s actions films filled with a huge start studded cast. William H. Macy, Jurgen Prochnow (the russian in EVERY movie back then), Harrison Ford, Glenn Close, Xander Berkeley, Dean Stockwell, Gary Oldman and countless other faces of actors who you all know, even if you can’t remember their names. Looking back at the film I have to admit that it’s pure machismo and patriotic jingoism at its finest, but insanely entertaining machismo and jingoism if I do say so myself. The film starts out pretty quickly and once the terrorists start taking over the plane, the 2 hour and 4 minute film doesn’t slow down till the credits roll (I’m being serious here, not hyperbolic. The movie is one non stop action sequence that just pushes forward without slowing down once).

President James Marshall (Harrison Ford) has just traveled to Moscow to oversee a refugee crisis, and on his way home runs into a bit of a snag. Radical terrorists who follow the recently imprisoned rogue general Radek (Jurgen Prochnow) have taken over Air Force One (sneaking on board with stolen credentials), and taken the entire plane captive. Luckily the President is whisked off to the escape pod, but his wife Grace (Wendy Crewson) and daughter Alice (Liesel Matthews, who acted in only 3 films ever) are left with the malevolent Ivan Korshunov and his band of hijackers. Ivan wants one thing and one thing only. The release of General Radek, and he will use the remaining diplomats and heads of state on board the plane as leverage to get what he wants.

Unbeknownst to the anyone else, the President’s escape pod wasn’t as occupied as everyone had thought. Marshall has stayed behind to rescue his family, and nothing will stand in his way. Waging a one man war against the terrorist, he uses his old Vietnam skills to whittle them down and hopefully land the plane before anyone else gets hurt.

Air Force One is complete and utter hilarity form a realism standpoint, but it is one fun ride though. Guns, knives, Russian post cold war terrorists, and Harrison Ford snarling into the camera. What more could you possibly want? Despite being near fantasy level of reality, the action packed Die Hard clone tackles the insanity head on and just has fun with it. Everyone is giving it their all, with veteran actors like Dean Stockwell, Glenn Close making everything feel so exciting. Harrison Ford was starting on the decline of his career at this point, and was getting a little silver in the hair to prove it, but he makes for an exciting one man crew, using his knowledge of the plane and physical prowess his biggest assets. Gary Oldman never disappoints when playing a bad guy, and even though he's not as insane as he is in The Professional, he makes a great unhinged terrorist. I want to actually dislike the film from a technical stand point, but I honestly can’t. It’s a wild tour de force of action that just leaves me with a huge sloppy grin over my face every time I watch it.

Sony has gone back to the original camera negatives and given Air Force One a brand new 4K master, and the results are absolutely incredible. Back in 2009 the film (and yes, this is actual FILM, not digital) had a decent enough transfer, but it was obviously the weakest part of the whole package (besides the meager extras), even though it’s still considered a decent looking image. This new master just blows it completely out of the water, decimating any doubt that catalog titles can looks absolutely glorious in 4K. Right off the bat you notice a huge uptick in clarity and textural details. Faces are more defined, colors are bright and warmer, and the noisy and smeary looking black levels are completely gone. In fact, the black levels are one of the most startling things to watch if you’ve ever seen the 2009 Blu-ray. That disc always showed some crush and grain spikes that looked chunky (due to the compression of the old disc), but here the blacks are just sickeningly silken and deep, with no signs of any major crush or digital artifacting. The HDR really plays a major part in the presentation, allowing for the deepest blacks possible, and a much more vibrant color base. The colors themselves haven’t been “altered” per se, but they are much richer and the contrast levels are not nearly so blown out (although it does have the typical 90s look to faces, giving them a slightly creamy look). Honestly, this is an incredibly looking film, and the new master finally does it justice, and once again proves that Sony really has a handle on their 4K UHD transfers.

The single reigning champ of these specs is easily the film’s audio mix. The 2009 Blu-ray was given a healthy 5.1 Dolby TrueHD track that was considered demo worthy for the fledgling high definition format, but the upgrade to Atmos proves that the old mix has been surpassed in spades. The opening score soars with incredible pomp and spaciousness, and the minute the terrorists take over the plane the ensuing bedlam is nothing short of awe inspiring. The bass response is absolutely enormous, blasting us back in our seats with automatic weapons fire, and the throbbing rumble of Air Force One’s powerful engines. Surrounds are wildly active as the film just doesn’t ever stop to take a break, allowing us to hear every captive’s scream, every gunshot ricocheting off the bullet proof walls, and the shriek of F-15 fighters racing to the rescue. The overheads are one of the most important aspects of the new track, adding in little nuances such as when the President is trapped down in the hold, while the terrorists scrabble around overhead, or the swoosh as a fighter jet shoots from one end of the sound stage to the other, straight over the top. Simply put, this is one magical audio track, and the difference between the 5.1 and the Atmos track is just staggering if you have the equipment. Even if you don’t, the power and authority that the new mix holds makes the old Dolby TrueHD track seem anemic in comparison. Well done Sony.

Air Force One was one of the last truly great Die Hard clones, and it marked one of the last times that Harrison Ford would dominate the cinemas as a tough guy leading man. He was a tour de force action hero, and Air Force One is about as macho and exciting as they get. The new 4K UHD disc is absolutely stunning in terms of audio and video specs (pure demo material), but it sadly still maintains the only extra that the Blu-ray had (the audio commentary with director Wolfgang Petersen), but also throws us a teensy bone by adding in the official trailer. Still, don’t let that get you down as the film is an absolute action filled blast and the audio/video (where it truly counts on the disc) are jaw dropping. If you’re a fan of 80s and 90s action films, this is a must buy.

Thanks for the review. Another great movie to own.

One interesting tidbit about this flick... it’s the reason that Titanic wasn’t released in the summer. Apparently Harrison Ford didn’t want competition with Air Force One and somehow had Titanic pushed.