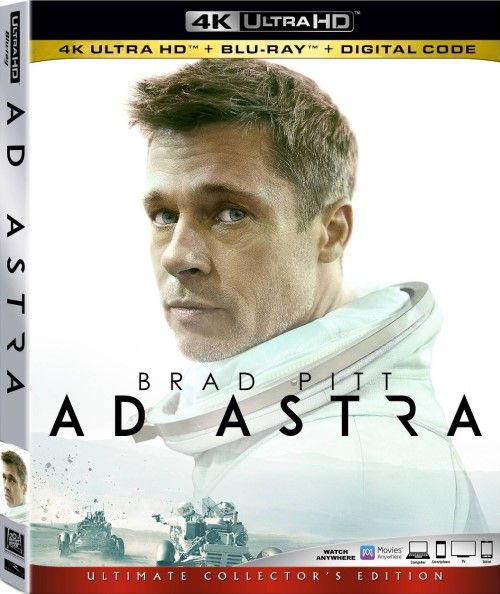 Movie
Ad Astra is probably one of the most strange and fascinating sci-fi movies of the last decades. Well, at least in the blockbuster Hollywood arena, as there are some incredibly bizarre and strange sci-fi movies out in the indie world recently, but for a big name film like this one, it’s definitely different. I’m actually not even sure where to put my film rating on this one. After watching it through twice I’m still mulling it over and still deciding whether I absolutely love Ad Astra, or whether I dislike it. It’s strange, enthralling, very familiar in some parts, yet totally alien and esoteric in others. The first half of the film engages in your typical space adventure, but once Brad Pitt’s Major McBride gets to Mars things take a dramatic turn towards the introspective arthouse genre. Even the ending, as “actiony” and Hollywood as it is, is over shadowed by the thick layers of self inspection and theorizing that McBride engages in throughout the film.

The story starts out simply enough. Major Roy McBride (Brad Pitt) is called in to the NASA-esque SpaceCom (Space Command) for a top secret briefing. His father left some 30 years ago on a mission to discover extra terrestrial life outside of the solar system, only for something to go wrong with the mission, resulting in total loss of contact with the Lima Project (the name of the operation). However, a cosmic “shockwave” has reached Earth, totally disrupting her power system, and it seems to carry the nuclear signature of the Lima. Meaning, Commander McBride (Tommy Lee Jones) is likely still alive and hiding out in deep space near Neptune. SpaceCom wants to ship Major McBride out to Mars where a signal station is still running up there in hopes of getting in contact with his father, and hopefully bringing the Lima Project back home.

The mission is simple, and Roy is more than happy to try and bring his long lost father home. However, when he gets to Mars some suspicious circumstances occur which shake his faith in SpaceCom. They’re obviously hiding something from him, and with the help of a local base operations manager (Ruth Negga) manages to figure out that SpaceCom isn’t there to bring the Lima Project home at all. Instead their plan is to cover up a stain on their reputation and make sure no one ever remembers the Lima or her mission. Sneaking aboard the ship that brought him to Mars, Major McBride sets out on a mission to find the Lima Project, and hopefully bring his father back in one piece.

As I said above, Ad Astra is a different film. The first 50 (ish) minutes play out fairly typically for a space adventure film. A new mission, a thrilling space travel, and a hidden agenda on the part of SpaceCom. It’s at that 50 something minute mark where Roy steals aboard the space ship on the way to the Lima Project that things turn very Interstellar in storytelling. It’s now a one man movie with Roy dealing with the effects of space travel, reminiscing about his earlier life and what he’s done and not done. While it is very personal to Roy, the narrative at this point is really a global humanist story, with the character of Roy acting as a mouthpiece for the film’s main themes, which vary from loving what you have in front of you, regret for the waste we as humans leave behind us, and various other social morays that the film struggles with.

In some ways I really REALLY love this movie. It’s hypnotic in the way it moves, with dialog that feels right out of a robots repertoire, as well as STUNNING cinematography that really reels the viewer in and hooks them with the space visuals. I haven’t seen a space movie this visually stunning since Gravity or Interstellar, and with a drastically reduced budget at that. Acting wise I would have to say that we really need to give top billing to Brad Pitt’s facial expressions. There’s not a whole lot of verbal storytelling with him if you really think about it, as he’s nothing but a narrator much of the time, but his facial expressions are so immensely expressive and nuanced that you get whole books worth of dialog just from his facial cues. Tommy Lee Jones is only in the film for a few minutes sadly, but he does a great job as the burned out space captain on camera, especially as he hasn’t been in the spotlight for quite some time.

Rated PG-13 for some violence and bloody images, and for brief strong languag

Ad Astra was shot on film using a variety of different cameras, and then transferred to home video with a native 4K master for both the Blu-ray and the 4K UHD disc. The end result is a film that looks FANTASTIC on 4K, and rather mixed together at the same time. The uptick in clarity from the Blu-ray is very well worth the extra price, but there are some strange affects due to blending of so many camera sources together. You can see grain structure a little bit differently from scene to scene, with some being thicker and more visible, while others being cleaner and flatter. The colors are more amber and red in nature, with elements of gray and white seeping through as well. The heavily colored/stylized film is gorgeous to look at, and the use of HDR makes these deep and dark colors so much more vivid and punchy. Ad Astra shies away from being glitzy and glossy, but instead puts forth a grim and dim look tot the whole movie, which overshadows the entire thing. I noticed some crush in the deep of space, but other than that, this is a near artifact free pictureu that is at treat to behold.

20th Century Fox takes the already great 7.1 DTS-HD MA track found on the 1080p Blu-ray disc and elevates it just a bit with a more satisfying and robust Dolby Atmos track. The mix is decidedly powerful and aggressive, with a neat balance with quieter moments as well. The opening scene with the skyhook is jaw dropping, as the sound stage just envelopes the listener with a cocoon of nuanced sounds, ranging from the creaking and groaning of the beams on the skyhook, to the whistling and whipping of the wind as Major McBride parachutes to earth. The vertical overheads get a goodly amount of workout in that scene, and the cocooning sound stage takes full advantage of that later on in the movie as McBride travels all the way to Neptune in a cramped ship. Bass can be earth crushingly powerful, yet subdued and meek when needed, as the film jumps between load and aggressive and the subtle quietness of isolation throughout the 2 hour + film.

Ad Astra is a fascinating film, even if it is slightly flawed. There’s a bit too many plot contrivances for it’s own good, and the main theme seems to deal with coming to grips with your own emotions, and is played by a man who acts like an automaton the entire film. Still, it’s a multi-layed film that seems to get better with multiple viewings, and has some of the most gorgeous cinematography that I’ve seen in a movie since Gravity. The film is one that isn’t going to appeal to everyone by a long shot, but I highly suggest checking it out for yourself, as this is definitely a movie where your mileage may vary from person to person. The 4K UHD disc is absolutely stunning, with a great video transfer and an absolutely perfect Atmos mix. Definitely check it out.

Recommendation: Definitely Check It Out

Arrrrrrrrrrrrrrrrgggggggggggghhhhhhh..... man. I really wanted to see a 4 or 4.5 stars for the movie itself. But, I'm still in. This is on my want list... and it looks like the AV presentation will still make it a fun ride.

Thanks for the review. I will also check this out. Thought it would be better but will still check it out.

Todd Anderson said:
Arrrrrrrrrrrrrrrrgggggggggggghhhhhhh..... man. I really wanted to see a 4 or 4.5 stars for the movie itself. But, I'm still in. This is on my want list... and it looks like the AV presentation will still make it a fun ride.

the film score shouldn't be treated as gospel. I chose that 3.5/5 because it's so hard to put a solid score on it. On one hand it's EXTREMELY fascinating, yet on the other it delves into existential arthouse at the same time and I was rather conflicted. It's definitely a "ymmv" type of film for individuals.

When Mcbride try's to dock his capsule too the ship his father is on.....I oddly noticed....no sound was made...but when the camera cut to inside Mcbride's capsule you heard the two contact. I was wondering if they did that intentionally...due to the idea that sound doesn't travel the same in space?

I noticed that too. there's a LOOOOT of sonic anomolies outside of the ship if you notice them

Nice review Mike! Yes, this one certainly has the potential to polarize audiences. I gave it 4 out of 5 but, also agree that the YMMV factor is front and center.

Nice review Mike! Yes, this one certainly has the potential to polarize audiences. I gave it 4 out of 5 but, also agree that the YMMV factor is front and center.
Click to expand...

nice to see you on our side of fence as usual Ralph. And yes, I can't stress enough that this is a highly personal matter in rating... for EVERYONE.. I can usually nail down what I think people will like or dislike from a movie, but this one is definitely one that I think will speak differently to just about everyone.

I loved this movie but only feel its worth 4 whole stars. I believe in part the emotionless performance was needed due to the tasks being provided, however, I think a comprise could have been reached. It is kind of hard to be at one with a somewhat empty man.

I’ll be giving this seemingly love it or hate it title a spin tonight. Thanks for the review.

I may give this another watching/listening as I was bit hash with it on first day it arrived. 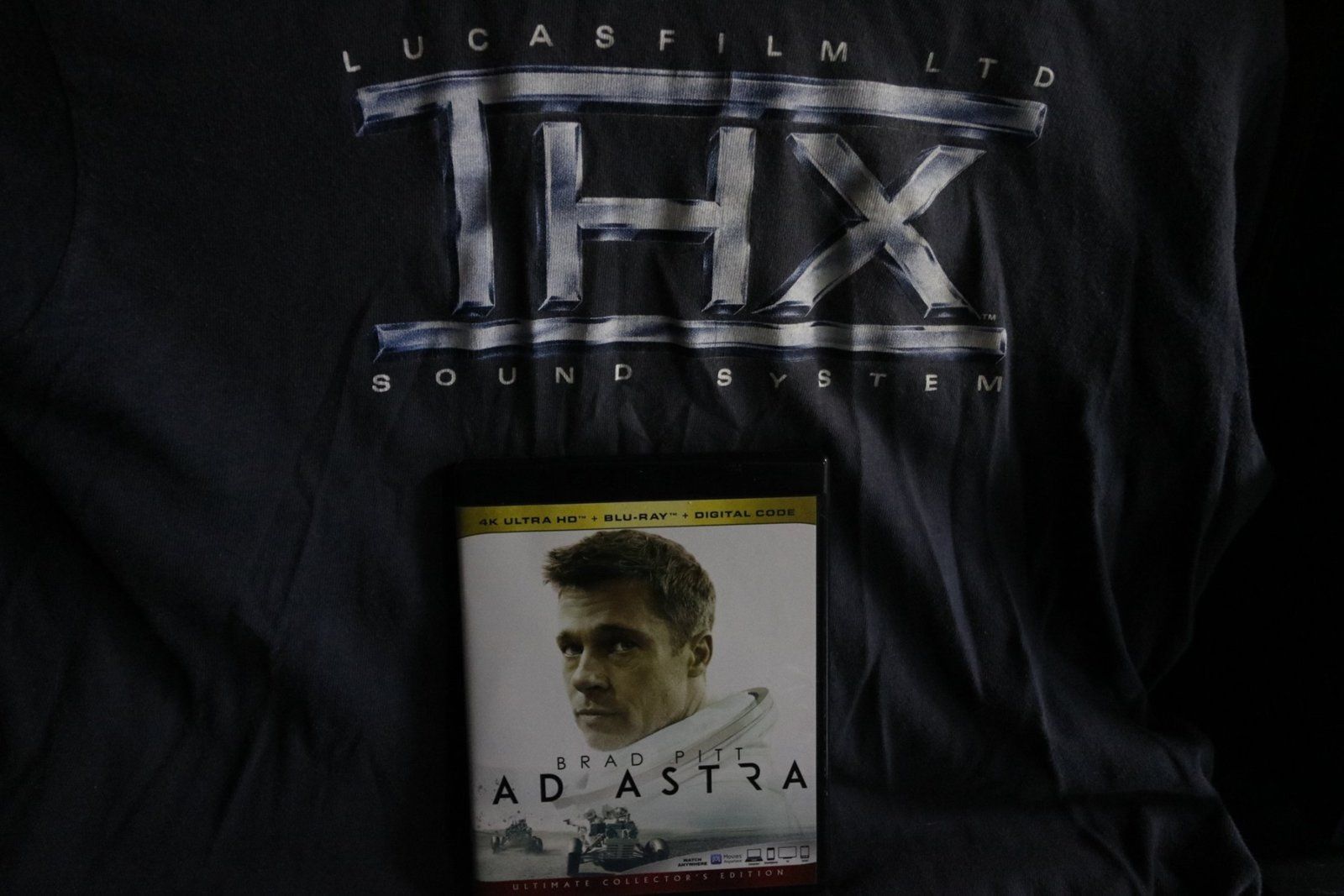