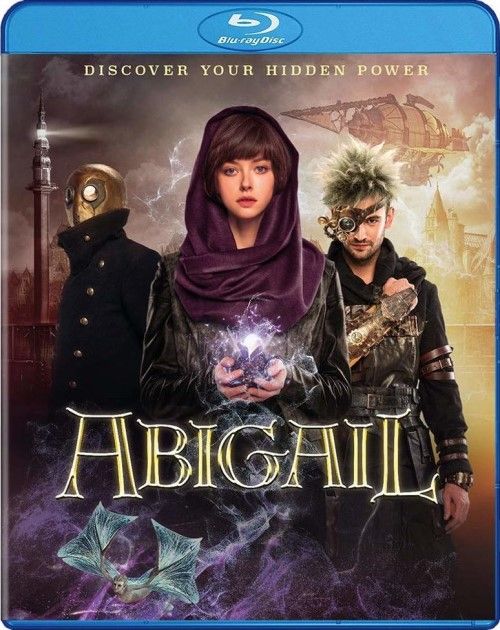 Movie
I find it darkly amusing that right around the time that we’re all panicking (or at least many people are panicking) about the Coronavirus, and Well Go USA drops off a movie on my doorstep about a pandemic that goes awry, including heavy handed quarantining, all wrapped up in a steampunk trapping. There’s also almost a Harry Potter vibe to the film as well, making it one of the more unique, and darkly comical if you think about, films in recent times that I’ve reviewed. Especially when you realize that the “illness” of the pandemic that Abigail focuses on is actually magical powers that the youth are exhibiting, bringing with it ANOTHER mental connotation in the form of The X-Men. The movie doesn’t always work, but it’s an entertaining sci-fi/steampunk romp that adds another “different” angle for Well Go USA to go after instead of the usual Asian cinema fare that they thrive on producing.

Abigail (Tinatin Dalakishvili) lives in a city where a terrible illness is covering the land. The city is quarantined by the government to make sure that no ill person is able to leave the city, and if someone is found to be carrying the plague they are immediately hauled off to God knows where, just like Abigail’s father was years ago. However, the “illness” really doesn’t exist, and Abigail soon finds out why as she begins exhibiting signs of the “disease”. What is really happening is that their fare city is no longer fare because of something more devious and dark than she could have imagined. The disease that the powers that be are so afraid of is magic. Dark Magic users have infected her city and wiped everyone’s memories of the fact that magic exists, and once covered the city like a beautiful tapestry.

When Abigail begins to exhibit magical powers of her own and garners the wrath of the dark magic users, she sets out on an adventure to find out what REALLY happened to her father, as well as foster her own magical abilities in order to protect those who most need it. Basically all in a days work for a young magic user!

Abigail is a visual treat, and a fantastic premise for a movie, but it also has a few problems along the way. The biggest is the fact that the translator for this film seems to have done a very poor job at doing so, as the dialog feels like it’s a bit more Engrish than it should be, and that some word salad is at play here. That’s not to say the movie is completely non understandable or anything, but sometimes you feel like you have to rewind the movie and re-translate what happened on screen, and then change the dialog set to fit the scenario. A weird almost “out of body” experience with the dialog.

Still, the movie itself is rather fun, and the visuals are stunning for a low budget, Eastern European, film. The set pieces, costumes, and magical powers are crafted very specifically and very lovingly though, making it very obvious that those involved with the creation were trying very hard to make it as authentically steam punk as possible. Even though the budget must not have been very massive by Hollywood standards, it looks great and doesn’t feel cheap or too low grade either. It’s an interesting film that definitely has a few stutters and hiccups along the way, but more entertaining than I expected it to be.

I couldn’t find any information whatsoever about the filming style of Abigail, and even the end credits didn’t turn up any hints. I’d naturally assume that this was a digital shoot (no film grain at all in the picture, and the budget naturally leans towards the cheaper digital camera methods), but I can’t find out what DI it was rendered at, nor what cameras were used for the production. The movie has a bit of a gauzy haziness to it that looks like was meant to cover up for the copious amount of CGI. There’s some softness to the image, but overall it’s a very nice looking 2.39:1 framed transfer. Colors are sharp and vivid against the grim and dim looking backdrop, and overall clarity is generally excellent. Clothing and facial details are readily apparent, and despite some wonky looking contrast levels, the film is generally VERY pleasing.

The 5.1 DTS-HD MA track is just about as good as the video encode is. It’s not going to be a massive powerhouse mix, but its certainly effective enough, with some good surround immersion during the adventures, and the whole magical power scenes sizzle with energy. Some of the top end of the sound spectrum can feel a bit thin and under powered at times, but the dialog is crystal clear and the front of the sound stage is quite active. A solid mix, that does everything well, checking off just enough of the right check boxes.

I had to get a chuckle out of the English translation for this film, and it really did affect some of the movie’s cinematic magic too. Instead of filming in their original Eastern Euro language and then having it dubbed for the states, the actors actually spoke English, and you can tell whoever was in charge on set for English translation was NOT an English Major at all. The film itself is an odd entry, as Steampunk films are few and far between these days (even though the genre is alive and well at just about any Comicon you can imagine), and it was a lot more fun than I expected from the trailer. The film is well crafted visually, but combined with a rather meandering plot it doesn’t always realize the lofty intentions that it so desperately wanted to fulfill. The Blu-ray looks and sounds good, but there are next to no extras outside of a couple of trailers. Worth a rental if the trailer tickle’s your fancy