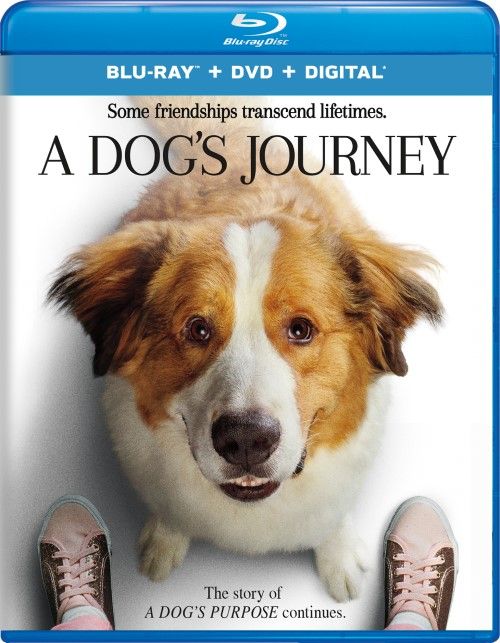 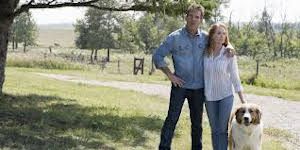 Movie
As a rabid dog lover (only 2 little canine hell spawns under my roof right now, but that will change if I have my way) there was no way in blazes I was going to miss A Dog’s Journey. I rather enjoyed the fluffy tearjerking dramedy that was A Dog’s Purpose 3 years ago and I was cheerfully getting the kleenex and popcorn for this one as well, but had some reservations. Sequels are rarely as good as the ones that came before it, and A Dog’s Purpose ended with Bailey (Josh Gad) finding and reconnecting with his old human Ethan (Dennis Quaid) at the very end, which meant that there was no real need to to continue forward with the story. Anything made after that fact would feel trite and forced. Welllllllllll, I have to admit that I was wrong. A Dog’s Journey actually surpassed the original with a tale that fits well into the original story line of Bailey and Ethan, culminating with an adorably sweet and tear jerking ending that brings the entire “tail” full circle to where it all started.

Bailey and Ethan are back together at last, and the years have gone on. Ethan and his now wife Hannah (Marg Helgenberger) are happily married, but in the middle of a familial crisis. Hannah’s adult son Henry has recently died, leaving a widow in his wake named Gloria (Betty Gilpin) and her newborn daughter CJ. Gloria is a complete wreck and going through paranoid delusions that Ethan and Hannah want to steal the trust fund that Henry left behind, so she packs up her bags and moves off to Chicago to “protect” herself and her daughter. Ethan is crushed, and not long after Bailey is found to have cancer and is the old man is forced to put down his best friend. On Bailey’s deathbed Ethan begs the body jumping dog to look after and protect CJ from now on.

As with A Dog’s Purpose, Bailey pops back alive in another puppy’s body. This time he’s a cute little female beagle named Molly who JUUUUUUUUST so happens to reincarnate into a litter that was born in Chicago. Little CJ also coincidentally happens to stumble across Molly with her best friend Trent and scoops her up, much to the chagrin of her self absorbed mother Gloria. As life goes on, Molly begins to heal the wounds of a lonely little girl, only to be snatched away during a car accident, leaving the young girl devestated. However, this isn’t over yet. Bailey comes back a few more times, but he never stops look for his little ward, finally finding his way back into her life as a little munckin named Max.

The story of A Dog’s Journey is not so much about desperately finding that one person as it was in A Dog’s Purpose, as much as it is Bailey’s life’s mission to heal and protect CJ. The story spends an equal amount of time dealing with the seriously dark and disturbing themes that permeate her life as well as the adorableness that is Bailey narrating his way through her life. She’s an emotionally abandoned girl in need of a friend. Someone who almost follows through with her mother’s self destructive taste in men, as well being friends with a boy who has cancer. Each of these obstacles that are thrown in front of her are helped by the emotional support of man’s best friend. In this case a single friend who just so happens to jump bodies in an effort to make sure his human is loved and protected.

Sure, there’s definitely that sappy and contrived dramedy tone that the first movie had still infused into this one, but it’s so sweet and such a dog owner’s pure fantasy that it’s easy to shrug aside the more hammy moments. Every dog lover wishes that their best friend would ACTUALLY be able to be with them for more than the 10-15 years we get with them, and the movie gleefully plays into that wistful desire with heartfelt glee. The script itself is solid enough, but the campiness and overly coincidental nature of the actual plat are hard to deny. However, Josh Gad’s warm and fuzzy narration (and obvious enthusiasm) that really sells the film. He was the highlight of A Dog’s Purpose and he’s still the highlight hear, interjecting much needed humor into a film that would be otherwise bleak and dreary with the pain and suffering that runs through CJ’s life. In that way it creates the perfect balance of humor and darkness, culminating in a purely fantastic ending that wraps up the series with a bittersweet finality, but leaves this happy feeling deep inside.

Rated PG for thematic content, some peril and rude humor 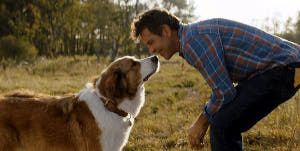 A Dog’s Journey comes to Blu-ray with a picture perfect 5 star rating from a digitally taken source. I’m not sure if it was taken from a 4K master or not, but the 3.4K Arri Alexa cameras used for the Blu-ray make for a gorgeous picture. The image is drenched in honey colored highlights with brilliant white levels and deep inky blacks. You can see every piece of fur on Molly’s little beagle body, or the intimate clothing details on CJ’s teenage frame. The picture just sparkles from beginning to end with nary a sign of banding or crush in site. I really tried to look for a flaw in this encode, but I really couldn’t. Everything is sharp as tack and just pure demo worthy eye candy. There’s a little bit of noise in some of the low light scenes, but it’s so slight as to really not be worth mentioning.

While there’s no DTS:X or Atmos track for the movie, A Dog’s Journey comes with a very healthy sounding 7.1 Dolby TrueHD track (surprised as Universal is really faithful to DTS-HD MA tracks for their non DTS:X or Atmos mixes) that is vibrant and full of life. Dialog is faithfully replicated throughout, with pinpoint precision in the front of the room. There’s some mild panning effects with barking and during the 50 minute point car accident, and LFE is appropriate as low end support for the score and said accident. The surrounds are really active with the sounds of barking, chirping birds out on the farm and other various ambient noises to the point that I was actually enjoying the heavy use of surrounds as much as the rest of the track. All in all, a great sounding mix.

• Audio Commentary with Director Gail Mancuso
• Deleted and Extended Scenes
• Gag Reel
• A DOG'S Sequel - New and returning cast members discuss their roles in A Dog's Journey and share their appreciation for director Gail Mancuso
• Everyone's Best Friend - Sit down with the cast to hear about their life-long love of man's best friend
• Working with Dogs - Cast and crew share the joys of working with animal-actors
• A Healing Journey - Josh Gad, Dennis Quaid and others discuss the bond between dogs and humans
• Scoring the JOURNEY - Director Gail Mancuso and composer Mark Isham discuss the music in the film

A Dog’s Purpose was a sweet and well meaning film, but I feel that the sequel actually surpassed it in both emotional depth and with relatability. The emotional resonance of the human characters translated a little better and that ending was nothing short of magical if you’re a dog lover. It wrapped up both films with a warm and tear jerking finality that brought the entire story back full circle to the beginning of Purpose. If you don’t shed a tear at least once or twice during the film then I’d honestly go to the doctors immediately to check if your heart is functioning (at least in this humble reviewers opinion). Universal delivers top tier quality audio and video for the release and actually includes a rather nice amount of extras to enjoy as well. As a rabid dog lover, I have to say that not only did A Dog’s Journey work as a sequel, it actually surpassed it in most ways, which is something EXTREMELY rare in the cinematic world. Highly recommended.

Phew, Mike. I think I shed a tear just reading the review. Being a dog person – and having an unbreakable bond with a furry wingman – these kinds of movies literally drag the heartstrings. Marley and Me had me grabbing tissues for like a month!

I'll give this flick a spin if my daughters haven't seen it. If they have, I might do myself an emotional favor and "accidentally" forget to watch it. ;-)