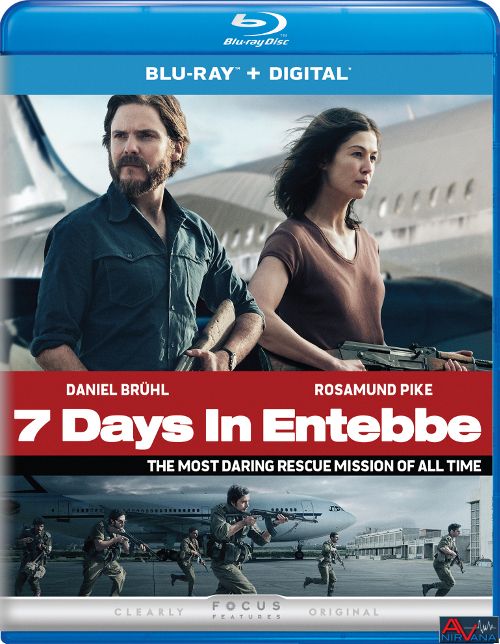 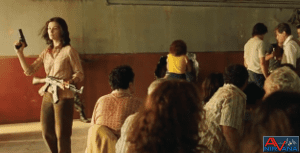 I have a huge love for true to life hostage situations. While fantasy is a great stepping point for a gripping narrative, many times truth really is more entertaining than fiction. Maybe it has to do with the realization that his actually happened, or the fear of what might MIGHT happen due to the real nature of the subject matter. Still, some of the most fascinating films have all been focused around REAL events, and even if liberties are taken with the source material, the actual events themselves are fascinating to dissect. Hostages, terrorists, hijacked planes, it all sounds like the making of another solid thriller, and I was REALLY excited to see 7 Days in Entebbe as a result. I was a bit disappointed with Clint Eastwood’s The 15:17 to Paris, but was hoping Jose Padilha’s (Robocop remake) thriller could make up for that. Sadly the movie tries its very hardest, but Padilha uses a fractured narrative trying to give voice to all sides of the situation, and it leaves the film starved of tension and introduces a few rather ludicrous sub plots that really had me grating my teeth with frustration.

It was a routine flight from Tel Aviv to Paris via Athens, Greece back in 1976. A mixture of french, Israeli and international passengers got on board the famed flight and it was time to relax. However, two German revolutionaries named Wilfried Bose (Daniel Bruhl) and Brigitte Kuhlmann (Rosamund Pike), along with a handful of Palestinian refugees, hijack the plane with nothing but handguns and a handful of grenades. The Israeli government immediately recognizes the handy work of HAMAS and hunkers down for the inevitable landing in Israeli land for the whole thing to become a televised international incident. Normally this would have happened, but the inclusion of Brigitte and Wilfried throw a monkey wrench into the statistical probabilities. Instead of making a big scene, they divert the plane from Athens to Entebbe, Uganda, where they hole up with an African Warlord in order to force the Israeli’s hand (making them effectively invade an African country, or give in to their demands).

The basis for the film is rather simple. Terrorists take over a plane, land on foreign soil, and make the Israeli government grapple with the decision to make a huge international incident, or capitulate to their demands. In fact, the movie could have been cut down a good 20 or 30 minutes, but Jose Padilha tries so very hard to give every single player in the game a voice and screen time. We get to see the defense minister, Shimon Peres (Eddie Marson) fight with the Israeli Prime Minister about what to do. We look into the life of Zeev Hirsch (Ben Schnetzer) and his dancer girlfriend as she worries about him going into combat. We also see the terror and discomfort of the passengers as the terrorists hold them for ransom.

The really controversial voice happens to be those of the terrorists themselves, and I’m not just talking about the two German revolutionaries. I have zero problem trying to see WHY people do what they do, especially villains, but it came across very strongly that Padilha was trying really hard to humanize them. A tactic which seems sincere at first, but then becomes very uncomfortable when you realize that the powers that be are trying to make you empathize with people who are more than willing to murder women and children. You get a sense of humanity from Brigitte and Wilfried, but there are several moments where you get this tearful and impassioned speech from the Palestinian nationals talking how they love their country and the all the pain t hey have suffered, then literally in the same breath talk about how they will gain their freedom and slaughter innocent passengers at the same time. It pushes the line between empathizing with a human, and empathizing with actual terrorists willing to murder, rape and destroy innocents for their cause. Something I’m not alone in, as I read countless reviews online making the same complaint.

While that’s controversial, the real issue with the movie comes from the fact that TOO MANY voices are heard. They try to focus on each person and each side so much that the dramatic tension gets lost in the confusion. The fracturing slows the story down to a veritable crawl, and for some reason they decided to insert Zeev’s girlfriend’s interpretive dance overlaid right on top of the infamous end raid of the terrorist hideout, further draining any semblance of dramatic tension in what would have been THE moment for drama! There were some great performances, but overall the movie felt mushed together and the dramatic tension that SHOULD have been there was very blatantly absent.

Despite my best efforts, I couldn’t find out what cameras or digital intermediate were used for 7 Days in Entebbe. However, I would bet my bottom dollar that this was a digital shoot, as the film has all the glossy earmarks of a digital production. The film makers did a fantastic job at recreating the 1970s vibe of the film, down the lightly sepia tones and dusty look of the characters military uniforms. The image itself is rather clean and clear, with only mild color grading deviating from the neutral look that the crisp digital image produces. Faces and backdrops show great clarity, with little nuances (such as the beard of Daniel Bruhl, or the lacing on the dancers uniforms) showing up with razor sharp detail. There’s a mild element of softness to the picture, with some of the darker scenes (in the Israeli military base) showing some crush, but overall this is a well done encode by Universal.

Armed with a solitary 5.1 DTS-HD MA track in English, 7 Days in Entebbe presents a very healthy sounding mix that is full of excitement and pizzazz, but also can be very restrained and laid back when needed. The opening hijacking scene is very visceral and encompassing, with loud shouting, claustrophobic thumping, and the general sense of tense nervousness permeating the sound stage. When the hostages are at Entebbe it quiets down a bit, but the rest of the track is interspersed with the aggressive sounds of the interpretive dance number that Patricia is practicing for, as well as the pulsating of the score. The surrounds are given ample room to stretch their legs during these moments, but are also comfortable pulling themselves back to a trickle and letting the dialog take over. Dynamic range is impressive, but not overly aggressive, and the mix itself is quite evenly balanced with moments of intensity and the overall dialog heavy nature of the rest of the film.

While 7 Days in Entebbe never truly coalesces into what it wanted to be, it’s an interesting look at one of modern history’s more memorable international moments of excitement. The film tries to be rather crafty, and uses several different storytelling devices to tell the true story. Sadly, some of them fall flat and the effort in trying to give all sides a voice detracts from the overall experience (especially trying to over empathize with the terrorists themselves). The true event was stunningly heroic and one of the 70s biggest international stories, but the movie itself is a bit disjointed and not as entertaining as I would have hoped for. Universal once again displays good technical specs for the Blu-ray itself, and its definitely worth a watch for those interested in the subject matter, but I would do so with low expectations and give this one a rental at the most.