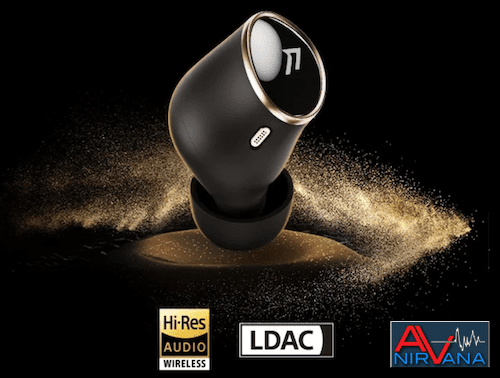 (May 12, 2022) A champion of affordable yet performance-driven audio, 1MORE has revealed a new flagship wireless earbud. The all-new EVO improves upon the company's True Wireless ANC model, delivering a factory specified 20Hz to 40kHz frequency response with Hi-Res Audio Certification. EVO carries a feedforward and feedback microphone on each earbud to cancel unwanted sound, paired with a 10mm DLC dynamic driver for a reduction of ambient noise up to 42dB. Toss in a 15-minute fast charge for four hours of playback and eight hours of playback on a typical full charge, and EVO can be used for up to 28 hours with case charges.

Priced regularly at $169.99, the 1MORE EVO is currently shipping for $139.99 with the coupon code "EVO30." To redeem this code, visit all Amazon Marketplaces or the 1MORE USA website. For more information, read the official press release, below.

SAN DIEGO, CA – 1MORE, a globally distributed premium consumer audio company, today announced their brand-new EVO buds, the evolution of their original CES 2020 Award-winning True Wireless ANC earbuds, are now available at 1more.com and Amazon. The EVO builds upon everything that was loved about 1MORE’s previous flagship True Wireless ANC and current ColorBuds 2 and produces something even better. Building upon their trademark dual driver design, the 1MORE EVO earbuds boast a frequency response from 20Hz to 40kHz, delivering extreme audio quality and earning the earbuds a Hi-Res Audio certification, for the affordable price of $169.99.

What’s more, together with 4-time Grammy award-winning sound engineer, Luca Bignardi, and 1MORE’s continued partnership with Sonarworks, the 1MORE EVO deliver incredible clarity, punchy bass, crispy vocals, unrivalled details and a wide soundstage which are excellent even at low volumes. Factoring in the support of the LDAC codec, the EVO provides a decoding rate up to 990Kbps to deliver a fully enriched detailed soundscape and accurate music reproduction. This is high-fidelity sound, but evolved into something much more. “Sound should be shaped around human ears' needs”, said 1MORE’s Luca Bignardi. He went on to say, “sound shouldn’t have flat lines to only make laboratory engineers happy... by personalizing the sound for everyone, the 1MORE EVO makes it true more than ever”.

The ultimate wireless audio experience commands an equally immersive noise cancellation suite to allow audiophiles and casual listeners alike to enjoy the accurate reproduction of any selected medium for their auditory pleasure. The 1MORE EVO adopts its renowned QuietMax technology by combining both a feedforward and feedback microphone on each of the earbuds that can capture the ambient frequencies both outside the earbuds and inside the acoustic cavity to cancel unwanted frequencies and deliver the signature sound that 1MORE is well-known for. The 10mm DLC dynamic driver further generates accurate anti-noise signals to cancel out the ambient noise. All in all, the 1MORE EVO can achieve an astonishing 42dB of total noise cancellation for not only outstanding resolution, but a tranquil sound experience too. With the added feature of SoundID, listeners can also have the 1MORE EVO earbuds tuned exactly to their liking within the 1MORE Music App.

Additionally, 1MORE provides ‘Adaptive ANC’ that can be toggled on or off via the 1MORE MUSIC App or at a long finger press of the intuitive touch controls offered by the buds. This mode can intelligently detect the ambient noise via an algorithm that will remove the surrounding noise. The buds will automatically change the levels of the noise suppression accordingly for the best possible listening experience. Along with an Adaptive ANC mode, the 1MORE QuietMax suite is further bolstered by multiple noise cancelling options to switch between including, but not limited to, a milder ANC experience that provides a more delicate balance between ambient noise and in-ear pressure ideal for a relaxing break at the local coffee shop and, furthermore, a Wind Noise Resistant mode whereby the microphones will pick up any wind noise that may enter via the microphonics and automatically suppress it to provide more musical enjoyment when, for example, cycling on a bike.

It's not all about blocking the world out. Sometimes we need to ‘hear more’. Something 1MORE is synonymous with. The 1MORE EVO ups the ante by including not one, but two transparency modes to switch between depending on the scenario. A more traditional Pass-through mode allows the user to let in the ambient sound around them that can be particularly useful in situations such a heavy traffic being more aware of the surroundings. If this wasn’t enough, 1MORE now includes an additional Voice Enhancement mode that amplifies frequencies such as those of human voices to stand out even better in situations such as spontaneous encounters with passing commuters or to listen out for important announcements on a train platform.

The 1MORE EVO is also tuned and ready for calls, too. A total of six microphones – 3 per earbud – and an AI-powered DNN (Deep Neural Network) algorithm seamlessly work together to filter out surrounding noises and direct your voice when you’re on the phone to provide crystal-clear quality conversations. A feedforward mic catches the environmental noise and cancels out higher pitch sounds while the feedback mic can adapt to variations to self-correct lower pitch sounds. The talking microphone will then accurately pick up the human voice frequency and amplify it with the aid of the DNN that adds an extra layer of clarity to recognize the human voice and boost it further so that every word is heard.

The buds offer both a 15-minute fast charge for 4-hours of musical enjoyment, and support for Qi wireless charging for sheer convenience. In total, these truly are a pair of earbuds you can go anywhere with, offering up to 28-hours of playtime and up to 8-hours on a single charge. With IPX 4 waterproof protection, the buds will also stay safe during light workouts, too. Dual-device connection support is also available via the 1MORE MUSIC App for seamless swapping, so there’s zero need to travel with two separate True Wireless earbuds as the 1MORE EVO buds can connect to two devices simultaneously with its strong Bluetooth 5.2 technology. And for that extra piece of mind, the EVO buds’ 3D panel is crafted out of smooth, durable ceramic that can also effectively reduce electromagnetic signal interference, keeping a stable audio transmission whatever you do and wherever you are.

To celebrate the launch, 1MORE are offering $30 off for the first 30 days using the coupon code ‘EVO30’ redeemable at all Amazon marketplaces and on the 1MORE USA website.