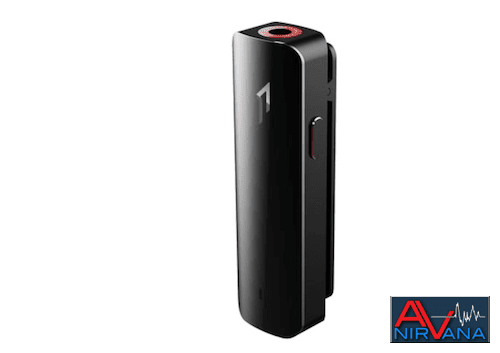 The Hi-Definition Bluetooth Adapter weighs a mere 11.5g and is small enough to clip on your blue jean’s watch pocket. But within its compact form factor, 1More has given the device several interesting capabilities. Consider the device’s 8 hours of playback time on a single two-hour charge, or button controls to manage phone calls and track selection. It also offers users access to Bluetooth 5.0 streaming along with playback of Hi-Res codecs such as Sony’s LDAC or Apple’s AAC.

Priced at $29.99, the Hi-Definition Bluetooth Adapter is a certifiable curiosity, if anything else. AV NIRVANA has placed a request for a review sample. Stay tuned!

Other Equipment
DDRC 88A Room Correction FOR SALE

Looking forward to the review! I have owned Apple's Powerbeats Pro for over a year and I'm blown away how wireless listening has got my attention. I use them all the time; Dog walks, Yard work, Car work... and they sound pretty good. I am hoping their new AirPods Studio.....If they even get remotely close to my Sennheiser 800S or my Dan Clark's AFC's I'm in! ....I've been looking at the latest Sony WH-1000XM4 and Shure Aonic 50. The freedom from wires is amazing when they still can deliver high quality sound!