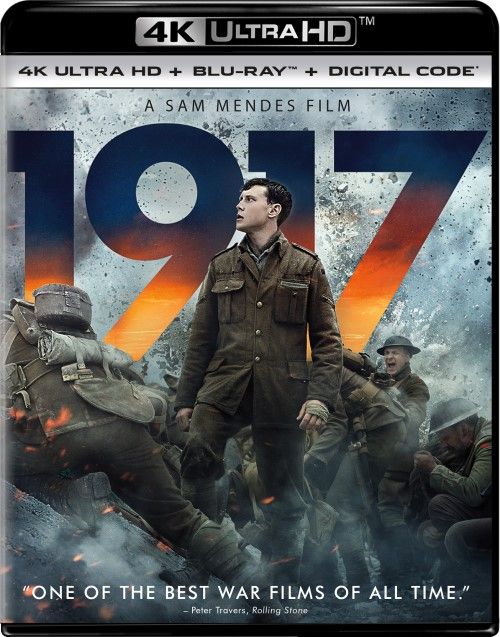 Movie
I’m a bit picky on war films, especially ones relating to the two major world wars we’ve had. It’s not that I don’t like them, but that they tend to be over done and overly cliched. Back in the days of John Wayne we had TONS of WWII films, so much so that they began to be over done and rather trite. However, there are some true greats to the war genre, and some that subvert our expectations with harrowing realism. Sam Mendes’ (Spectre, Road to Perdition, American Beauty) most certainly subverts many’s expectations with with 1917, creating a a film that taut, tense, and more realistic than most war films out there. All the while keeping the action to a minimum and using stunning “single shot” photography thanks to cinematographer Roger Deakins, which results in a very unique and low key dramatic war film.

It’s April 6th, 1917, and the World War I allies are taking a breather from vicious trench warfare in France until the German’s suddenly pull back for some reason. The British forces entrenched there see this as an opportunity to strike, and set forth 2 battalions of men to lead this charge. However, British air reconnaissance sees the bigger picture and realizes that the German forces are just re-grouping with back up forces down the road in an effort to bait and trap the allied forced in their over eager assault on the retreating Germans. General Erinmore (Colin Firth) grabs two young Lance Corporals under his command, ones Blake (Dean-Charles Chapman) and Schofield (George McKay) to sneak across enemy lines and relay the new discovery to Colonel McKenzie (Benedict Cumberbatch) before the Colonel sends out the order to attack and sends both of his battalions to their deaths.

1917 is absolutely jaw dropping, and a stunning war movie at that. It mesmerizes with the very first shot, using a distinctly close up style of film making that follows the two young Lance Corporal’s intimately. I know that there were multiple shots in the film, but Roger Deakins and Sam Mendes make it look like it is one continuous shot, just following the two boys as they sneak across enemy lines and get under fire. The style is extremely intimate and keeps the viewer firmly invested in the two lads, especially when tragedy befalls upon them. The action isn’t ever first and foremost, although we do have a few run ins with German troops, as well as a downed German fighter plane that spells doom for one of the corporals.

While the movie does have some big name actors in the credits (Mark Strong, Benedict Cumberbatch, Colin Firth), these big names are really there as support characters, while George McKay and Dean-Charles Chapman take the huge brunt of the character development. That’s not to say that they are not important though, as each interaction with these big names adds weight and story turning points for the two boys. Still, Dean and George are the true focus of Mendes’ story, and he keeps you so invested in the two boys that the 2 hours run time just flies by in what seems like half the time.

Rated R for violence, some disturbing images, and language

Wow, just Wow! The Blu-ray for 1917 was a fantastic disc by itself, but the 4K UHD simply blows it out of the water, and by a significant margin too. The film is a tapestry of browns, bleak greys, and greens, with very few daylight sequences to really shine, so black levels and contrast levels are absolutely paramount. While the Blu-ray was stunning, comparing to the 4K UHD showcases some unique changes to the film’s texture and look. The Blu-ray tends to look a bit creamy and bleak, while the 4K UHD shows off some stunning textural and contrast based changes that alters the look ever so slightly. It’s not that the colors are different or the palate changes, but rather that the deep contrast levels that the HDR and DV allows for sharpens up images in the darker shots, as well as changes the hue and depth of what we’re able to see. When Schofield is running through the flame destroyed city near the end you can see a TON more detail in the backgrounds of the burnished orange and shadow covered image, and during the daylight shots at the end on the battlefield the blades of grass and bits of debris show up much more distinctly, and with deeper shades of green. Facial details are incredible, and even though this movie is very very murky by design, the shadows and the detail levels maintain the utmost complexity throughout. I didn’t notice banding at all, and even the mild black crush found on the Blu-ray is just about eradicated. Just stunning.

The Dolby Atmos track (found on both the Blu-ray and the 4K UHD disc) is an incredible feat of sound engineering, pulling you directly into the film from the opening scene. When the two Lance Corporal’s get their order’s and make their way up the trenches you can hear all sorts of sounds from every angle, with the overheads making themselves known quite early on as planes go overhead (the dogfight around the 25 minute mark) as well as shells and rumblings off in the distance to compliment them in the surround department. Dialog is never a problem at all, and the vocals come through cleanly and crisply in the front of the room. The quieter moments almost suck all of the sound out of the room, and make an argument for how LACK of sound can be just as effective. Bass is heavy and powerful when called upon (such as the plane crashing down into the farmhouse, or during the combat scenes). All in all, a stunning display of audio mixing.

• The Weight of the World: Sam Mendes – Academy Award® winner Sam Mendes discusses his personal connection to World War 1.
• Allied Forces: Making 1917 - Learn how the one shot, 360-degree format was executed and the pivotal role Academy Award® winner Roger Deakins served in bringing Sam Mendes' vision to life.
• The Music of 1917 - Composer Thomas Newman and filmmakers discuss the important role of the Academy Award®-nominated score.
• In The Trenches - Go behind the scenes with the cast of 1917.
• Recreating History - Filmmakers offer a detailed look at the production design challenges of recreating the First World War.
• Feature Commentary with Director/Co-Writer Sam Mendes
• Feature Commentary with Director of Photography Roger Deakins.

1917 is a great war film, and does so by being very intimate and restrictive on the story line. It’s not some massive sweeping epic, but rather focuses on 2 single characters and the harrowing journey to deliver a SINGLE message. A message that single handedly could save the lives of over 1600 men on the battle front. It’s taught, hauntingly beautiful, and well directed from beginning to end. The 4K UHD is simply fantastic, with picture perfect video, and about as perfect an audio mix as you can get, even edging out the already fantastic Blu-ray. The extras aren’t bad either, being substantially more than the typical new release (at least in today’s day and age of meager extras). Well worth checking out.

Mine is showing up tomorrow and I can’t wait! Thanks for the great review Michael!

Can’t wait to watch this one! Thanks for the review.

Me too @JBrax. Ordered and awaiting arrival.

Ok, I’ve put it off long enough. The wife and I are watching it today. I’ll check back in and let you know what we thought.

JBrax said:
Ok, I’ve put it off long enough. The wife and I are watching it today. I’ll check back in and let you know what we thought.
Click to expand...

I hear ya! I've done the same with Ford v Ferrari. You won't be disappointed in this one - great cinematography and top shelf audio!

mechman said:
I hear ya! I've done the same with Ford v Ferrari. You won't be disappointed in this one - great cinematography and top shelf audio!