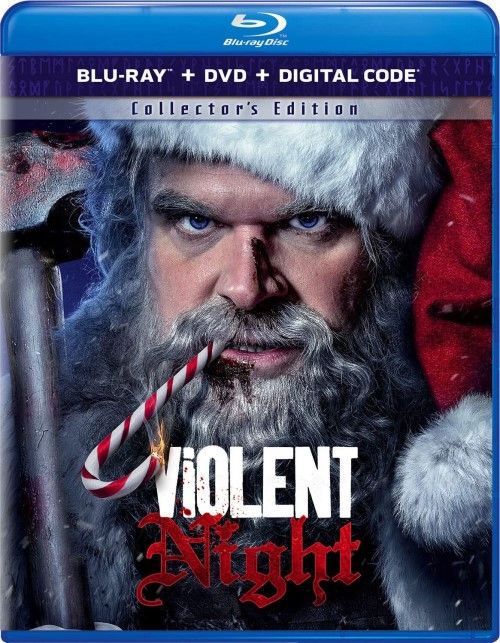 Movie
“Oh Holy Niiiiiiight! I think I blew my foooooot ooff!” (If you don’t know where that’s from, shame on you). Violent horror/action themed Christmas movies has been a thing for many years (Silent Night, Deadly Night etc), but it seems to have made a resurgence in the last few years. Mel Gibson’s Fat Man was certainly commendable, albeit a flawed application of the genre. However, Violent Night tends to avoid most of the veering pitfalls that Fat Man fell into, and instead dances just along the edge with tons of gore and violence to keep the fans grinning, and juuuuuuust enough humor and self aware winking at the camera to keep the audience from killing themselves by rolling their eyes into the back of their heads.

It’s Christmas Eve, and the wealthy Lightstone family is having their annual family Christmas party as usual. The snobby family is full of back stabbing, wannabes, and general sucking up the Matriarch Gertrude (played by an aging Beverly D’Angelo of Chevy Chase Vacation fame), and of course hating her at the same time. Jason (Alex Hassell) and his wife Linda (Alexis Louder) are having a bit of a hard time this year. The two has split up and are sharing custody of their daughter Trudy (Leah Brady) and trying to make due in a family that both family members hate being a part of. However, their “happy” little Christmas takes a sharp right turn when a group of mercenaries led by a man code named “Scrooge” (John Leguizamo) who wants the $300 million in cash hidden in the Lightstone vault.

What no one accounted for was the inclusion of a drunk Santa Clause (David Harbour), who just so happens to come down the chimney to drop off some presents, only to find himself stuck in the giant mansion with a bunch of psychotic mercenaries. Turns out Santa isn’t as jolly and nice as people imagine him as. Once a Viking raider cursed to become Santa to make up for his past crimes (intimated heavily throughout the movie), good old Mr. Clause finds a buuuuuuuuuunch of mercs on his naughty list, and he’s not about to leave without delivering them their lumps (of coal).

Violent Night is a hilarious lark that pretty much winks and nods at the camera the entire way till the credits. Director Tommy Wirkola makes no bones that this isn’t to be taken seriously, and if you keep that in mind this is a hilariously gory good time. Santa chops, stabs, impales, and makes jokes while making mined meat of the baddies. John Leguizamo isn’t AS over the top as he normally is (I’ve noticed that over the years he seems to be calming down from his normal high strung performances), but is deliciously fun as the evil Mr. Scrooge (and has one of the most satisfying and hilarious deaths of the movie). Alex Hassell is a bit more goofy and over the top from his normal serious rolls, and Beverly D’Angelo just has fun as the arrogant matriarch in her limited role (and boy howdy, does she sound like she’s smoke 3 packs a day for 30 years and had too much botox and face lifts).

The film itself is utterly ridiculous, but works as a sort of gory, insane, over the top lark where no one is actually taking anything seriously. It’s got elements of Norse mythology, David Harbour being David Harbour, and even some Home Alone thrown in for the 3rd act? It’s a bizarre movie, and objectively it’s a bad film. Yet at the end of the day I can’t help but just laugh myself silly and go along for the ride. It misses the weird pitfalls that Mel Gibson’s Fat Man fell into (mainly that abysmal center act), and instead just keeps amping up the insanity till the final act is quite literally almost pure comedy with some gore thrown in.

Rated R for strong bloody violence, language throughout and some sexual references.

I was a bit sad that Violent Night didn’t get a 4K UHD release (but knowing Universal, I wouldn’t be shocked to see Scream Factory get ahold of a 4K release in the next year), but the Blu-ray does look quite fabulous nonetheless. A rich and textured look for a digital film, the flick was shot using a 4.5K Arri Alexa camera system that was apparently mastered in 4K (once again, why I’d love to have seen a 4K UHD disc), I actually almost felt like I was watching film at times. It’s not noisy, but appears lightly grainy in places, with a diffused blue and mahogany look that was reminiscent of Krampus more than anything. Albeit less fuzzy looking. Fine details are excellent around the entire board, but I did notice the dark shots inside the shed was a bit crushed at times. No major banding to my eyes (outside of a few flickers in the forest), so overall a rather impressive looking encode.

I absolutely loved the 7.1 DTS-HD MA track except for one minor little quirk that surprised me. Right off the bat I noticed that the mix was recorded MUCH lower than normal. I usually go between -28 to -22 on my receiver for 99% of films, with a few needing me to bump up to -20 (*cough, Disney films *cough), but wowza. I had to go to -16 on my receiver to get to reference volume. Something which I’ve never seen before. Don’t get me wrong, the mix is perfectly fine and balanced once raised to reference levels, but people who are already straining the capabilities of their receivers already MIGHT find themselves running out of headroom in those rare circumstances due to the low volume. The track ends up being very punchy and powerful, with deep bass for explosions and gunfire, mixed with a highly kinetic surround usage that makes FULL use of all 4 surrounds during the battles as well as with the musical score. Dialog is crisp and clean, and outside of needing to give a good boost on the volume knob, this is a stellar mix.

• Deleted and Extended Scenes
• Family Arrives at the Mansion
• Jason and Linda in Bedroom
• Krampus Sees Trudy's Radio
• Santa on the Roof
• Walk to the Manger
• Family Resolution
• Bad Dad
• Cast Call Back
• Extended Scenes
• Quarrelin' Kringle - Cast and crew relay why David Harbour is the perfect brawler for this combative rendition of Santa.
• Santa's Helpers: The Making Of VIOLENT NIGHT - Tommy Wirkola and David Leitch have reunited for another madcap, violent fairytale with heart in VIOLENT NIGHT. This making-of will celebrate their spirited reunion as well as the other little helpers.
• Deck the Halls with Brawls - Go behind the action as we go blow for blow with the new villains of Christmas.
• Feature Commentary with Director Tommy Wirkola, Producer Guy Danella, Writer Pat Casey and Writer Josh Miller

Violent Night is a total blast, and probably my favorite guilty pleasure of the years so far (as short as this year has been to date). It’s profane, nasty, heart warming, and purely popcorn fun at its core. Don’t take it too seriously and you’ll be entertained. Try to analyze or enjoy this as a serious film and you’ll run into too much stupidity to overcome. The Blu-ray looks and sounds amazing though, with fantastic audio (outside of the massive decibel boosting needed) and some very solid extras as well. Fun, goofy, and just a brainless popcorn film, Violent Night is the present you just might not have known you needed this holiday season.

Thanks for the review. Never head of this one but will look for it.

Moments before I started watching the film I thought it was a horror (in part it can be) movie. I was disappointed when I found out it was an action movie but carried on. I liked it, not great but watchable. My wife kept saying that was Beverly D'Angelo and she was right. She's aged but that plastic surgery does her no justice. Thanks for the review.

Asere said:
Moments before I started watching the film I thought it was a horror (in part it can be) movie. I was disappointed when I found out it was an action movie but carried on. I liked it, not great but watchable. My wife kept saying that was Beverly D'Angelo and she was right. She's aged but that plastic surgery does her no justice. Thanks for the review.
Click to expand...