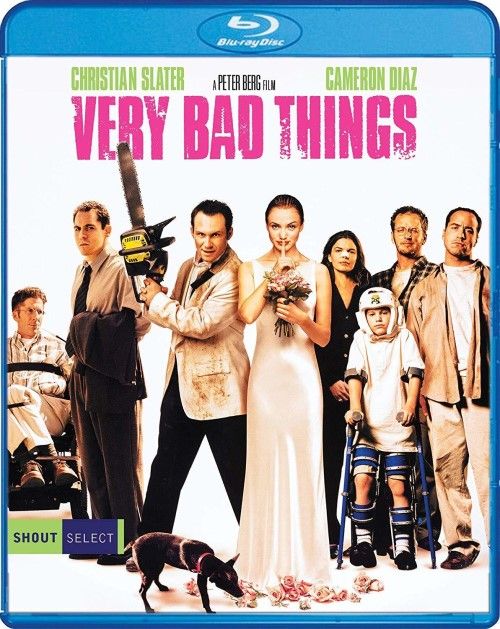 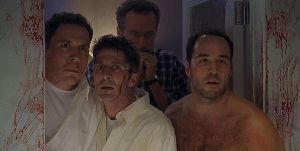 Movie
Peter Berg has always been one of my favorite “guilty pleasure” directors, having filmed the big dumb Battleship, the fun Patriot’s Day, and the equally intense Deepwater Horizon. He acted and scraped his way through the 1980s in supporting acting roles, but his big dream was always to become a director. He wanted to get behind the camera instead of being in front of it, and he finally got that big break in the late 90s with Very Bad Things. I’m actually surprised that Berg got a second chance with the studios, as Very Bad Things bombed badly at the box office, and even though he gets maligned for making Battleship, I don’t think that there’s a movie in his directing history that has turned out as badly as this one did. Very Bad Things had a great cast, a great dark premise, and a HILARIOUSLY twisted ending, but everything that came before it just doesn’t hold up.

I saw Very Bad Things back when it came out in 1998 as a highschooler and remember HATING it. I hated it so badly that I actually never watched it again until I got the notification that Shout Factory was putting it out as their 99th title in the premier Shout Select lineup. At this point it’s been almost 22 years and I figure that as a more matured and seasoned film fanatic I would give the movie another go. Luckily I ended up liking it better than I did as an 18 year old, but the down side is that it’s STILL a crummy movie. I just hate it a LITTLE less passionately than I did over 20 years ago.

Kyle (Jon Favreau) is about to get married to his lovely Bridezilla to be Laura (Cameron Diaz), and is about to set sail on that time honored tradition known as “the bachelor party” with his friends Mike (Jeremy Piven), Charles (Leland Orser), Adam (Daniel Stern), and loud mouthed Robert (Christian Slater). The trip is a classic The Hangover type adventure filled with booze, gambling, cocaine and strippers (played by Kobe Tai). However, it ends much much MUCH worse than The Hangover ever did. Mike ends up sleeping with the stripper, and in his coke fueled exuberance ends up killing her quite by accident. 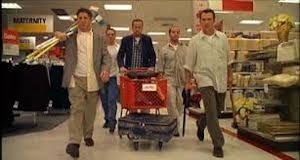 The 5 men are FREAKING out about what to do, and the only thing they can think to do is bury the girl out in the Nevada desert and never speak of it again. Naturally things don’t go as planned, as the men have to kill a security guard to cover their trail. But the trail of bodies doesn’t end there! Even when getting back to their lives the men can’t seem to keep a lid on their shock and grief over their actions. As the tensions rise, so do the body counts, with their respective group getting smaller and smaller with each unhinged murder they create.

Very Bad Things is billed as a dark comedy, but very little of the film is really funny. I’m a huge fan of witty black comedies, but except for the first 30 minutes, there’s nothing to really laugh at. Peter Berg can’t really get a grasp of good comedy here, instead just throwing one murder after another at the audience and making it as dark as possible. Supposedly we were to laugh at many of these scenes, but sadly most of the jokes fall flat (except for the ending 5 minutes, which is just perfect black ironic humor as Cameron Diaz’s Laura has been such an incredible thorn in everyone’s side the entire time).

Acting wise it’s actually pretty good despite Berg’s misdirected writing and directing. The film preys off of the frenetic tension of the 5 men after committing a murder, with Christian Slater’s Robert character standing out the most. He’s oily, slimy, and deliciously fun to hate the entire time. Jeremy Piven is one second away from snapping at every moment, and Jon Favreau’s general sense of lost confusion is spot on. As I said above, the actors were not the weak spot in this film. They gave solid performances, it’s just that Peter Berg’s first big break was raw and untamed, leading to the demise of this film. 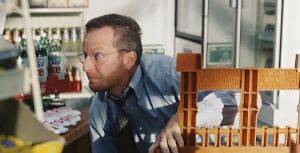 It looks like Shout Factory wasn’t able to source a modern scan to work with, and was probably given an aging master and told “work with it”. The end result is a 1.85:1 framed Blu-ray that barely looks better than the old DVD. Filtering is very obviously present, wiping away most of the enhanced detail levels and giving us some smeared faces and halos. There grain isn’t very filmic at all, but instead looks noisy and swarms around many scenes. Colors are a bit on that burnished red/orange of the late 90s and black levels are a bit murky. That’s not to say that the encode is a total waste. There’s still a moderate amount of detail and backgrounds are not nearly as smeared as they were on the decades old DVD. It is what it is, and I can’t see any major artifacting that isn’t source related. 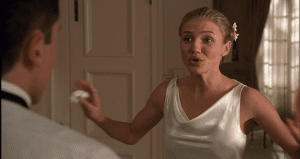 The 5.1 DTS-HD MA track is a bit more precise, with good dialog and a strong sense of surround presence due to the constant tension and screaming matches that ensue. The score is fluid and clean, creating a sense of spaciousness in an otherwise cramped sounding mix. The LFE adds weight to said score, as well as coming into play a few times, such as when Michael slams into his brother’s minivan, or the thudding sound of a body falling downstairs.

Very Bad Things tried so hard to be a shock value black comedy, but there really isn’t a whole lot of shock, and Berg failed to really deliver on the humor as well. I got a good chuckle out of the final 5 minutes of the movie as well as the first 20-30 minutes, but after that it just became a mess. I understand that this has become a sort of cult classic to some, but even 22 years later I still can’t really enjoy it, despite the fact that I really do love most of Peter Berg’s work. Shout Factory seems to have not been able to get a new scan for the film, leaving us with severely disappointing video, but the audio is quite solid and the brand new extras are excellent. This is a movie that’s for the fans, and for the fans only in my opinion.

Recommendation: For the Fans