Valley of the Gods - Blu-ray Review

Valley of the Gods

Movie
Art house films are somewhat of a love/hate relationship with this reviewer. Many times they can be a gateway to some incredibly rich and nuanced storytelling told outside of the traditional 3 arc story modes, and other times they are just an incomprehensible mess. I have to admit that I was really drawn to the story due to the fact that Josh Hartnett (a heavily under rated actor) and John Malkovich (a living legend) were the main characters of the film, and not due to the incredibly trippy trailer for the film. I wasn’t sure what to expect going into it, and coming out of the viewing, I’m still not sure what I watched.

The seemingly intentionally opaque film by polish director/writer Lech Majewski is set in Southern Utah (which is the basis for many a strange western or supernatural film) where we have a tri-plotted story. The first being that of John Ecas (Josh Hartnett), a tired writer who has just lost his wife and his job, and is on his way to write a biography about the richest man in the world. The second storyline is that OF the richest man in the world, an eccentric trillionaire named Wes Tauros (John Malkovich), who seems to get his kicks masquerading as a homeless person and blending in with the lower class. The third being that of a Native American community that is struggling to decide between accepting the engineering firm (owned by Wes Tauros) who is intent on mining the uranium in the Navajo valley of the Gods (who do make a bizarre appearance later on in the film), and whether or not they should keep their native lands.

Needless to say, Valley of the Gods is one of the most vague and opaque movies that I’ve ever seen. There is no real plot per se, but rather a string of seemingly MAYBE related vignettes that get more and more bizarre as the film progresses. Trying to find a point to the whole endeavor is about as fruitful as pulling your own hair out and looking for a message in the fibers, and ultimately it’s more beneficial to accept that the film is a visual art piece, rather than a visual story. Pieces of the film almost draw you in and you’re left wondering what it’s going to reveal (such as the mummification, or people trapped in cages), but then the film just flits over to another completely unrelated scene and leaves the viewer wondering if the director was taking a LOOOOOOOOOOOOT of drugs during the filming of this movie. And what prompted a backing studio to FUND this in the first place.

The production has a very Werner Herzog esque flair to it, but without the focus and intelligence behind it. However, I will give the cinematography props as it is one of the most auspicious and beautiful looking shoots I have ever seen. The camera angles and framing are nothing short of jaw dropping, and outside of some dodgy CGI near the end, the film is almost luscious and sumptuous in it’s visuals. I desperately wanted something a bit more from this film, and even though the movie is almost incomprehensible in it’s storytelling, the visuals are almost enough for me to recommend it.

The 2.39:1 framed digital shoot (I’m betting my life on the fact that it’s digital) is gorgeous to look at, and even though I can’t find any definitive answers on what resolution the master is (guessing 2K, but that’s not really that relevant) or what cameras were used, we can rest assured that Well Go USA’s Blu-ray release looks amazing. There’s some typical Well Go USA color banding in dark shots (it wouldn’t be a Well Go USA release WITHOUT some banding), but the unique visual styles presented in the film are luscious to look at. The home of Tauros is adorned with mahogany wood, dark golden hues and tinges of brown, while the world of the Navajo down in the valley is much more muted and dusty/red looking. Outside where John works we see a much crisper and more “apple I-pod white” sterility due to the stone and modernist looking household decorations. It’s a nice looking film for sure, and easily one of the best parts of the package.

The 5.1 DTS-HD MA mix is generally excellent, with few exceptions. Vocals are crisp and clean in the front of the room whether you are listening to Navajo chanting or English, and the surrounds are constantly filled with Jan A.P. Kaczmarek’s haunting score. The surrounds had a weird issue with hearing background noise during some of the quieter moments, but that’s only if you’re listening for it. LFE is good and strong most of the time, with good presence in the storms as well as the really powerful “Gojira” type moment at the end of the film. It’s a great sounding mix that makes use of quiet, intensely powerful ambient noises, and the whispering and flitting sounds inside of We Tauros’s estate. 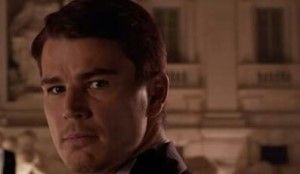 All things being said, Valley of the Gods is an incomprehensible film that is neither good nor bad, but rather just “nothing” at the end of the day. The intentions were most likely ambitious and ostentatious, but the result is nothing short of an acid trip without the hangover the next day. The Blu-ray looks and sounds quite good, but like usual there are almost no extras to be found on the Well Go USA disc. I had a rough time deciding whether to recommend this to people to see if I was missing something and others might gain something meaningful from it, or just skip it entirely for being a failed attempt at something greater. At the end of the day I’m putting a middle of the road rating on it, as it is so strangely obtuse and unique that I can’t recommend it, but neither can I actually warn you away from it either.

This looks terrible... perhaps to understand it, you need to do a LOOOOOOOOOT of drugs too???

Todd Anderson said:
This looks terrible... perhaps to understand it, you need to do a LOOOOOOOOOT of drugs too???

lol, you have no idea. What's sad is that at times it really seems like it's going somewhere, but then devolves back into incomprehensibility way too often.

I hope I never have to find out.