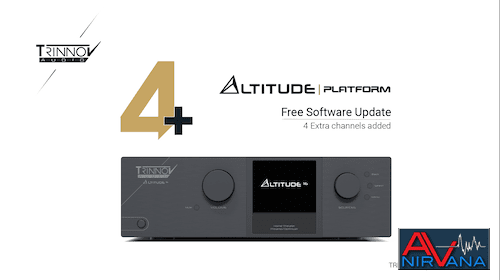 (September 17, 2021) Trinnov’s Altitude-16 and -32 owners are waking up to several exciting announcements, including a free upgrade that injects their respective processors with four – yes FOUR – additional channels of output. If you’re rubbing your eyes and wondering if that second cup of coffee was spiked, I can assure you nothing is amiss. Trinnov is actually giving its customers four additional audio channels for free. Oh, did I forget to mention IMAX Enhanced certification is official, too?

Forging ahead with its “customer-first focus,” Trinnov’s co-founder and CEO Arnaud Laborie says, “Our aim is to help home theater enthusiasts and integrators avoid compromising on their designs and maintain ambitious projects that achieve reference level sound quality.” To prove that point, Trinnov has delivered a free software release that turns the Altitude-16 into a 20 channel processor and boosts the Altitude-32 to 36 channels of output.

Trinnov has creatively converted the Altitude-16’s Toslink output to ADAT, a well-known transport protocol in Pro Audio circles, allowing it to carry four channels at ≤96kHz. Owners merely need to add a simple digital to analog converter and they're in business. Altitude-32 customers have an even easier path to expansion by recruiting the built-in AES/EBU outputs on their processor.

“Our implementation of immersive sound codecs is unrivaled. We have always been committed to high spatial resolution and we are now taking the extra step to enable this benefit across a higher number of home theater installations by adding four extra discrete and acoustically optimized outputs. Among countless new possibilities, this update now allows Altitude16 owners to support the very popular 9.4.6 speaker layout and maximize low frequency and 3D sound performance with our fully integrated calibration suite,” explains Arnaud Laborie.

Trinnov says both new features will become available by mid-October through a free software download.

Simply amazing that this is being offered for free. Love my Altitude 16, that's for sure.

It's definitely a nice perk. The modularity/upgradability that Trinnov and StormAudio support is awesome. Of course, you pay more upfront. But, that gives you a lot of longevity!

Did you replace the Anthem processor in your gear rack with an Altitude-16?

Is it mid-October yet

Lincoln One Echo said:
Is it mid-October yet

I know but they themselves did say mid-October! Just surprised by the delay because the Paris Show is on this weekend and they will have Altitude 16 , new Amplitude 16 and the new software on show . I’m sure it will be worth it eventually when it arrives
M

They might be working out a few bugs. I'm sure a small delay is worth its weight in gold when compared to hundreds of installers opening help tickets for customers.

That said, maybe they want to make the Paris Show the launching pad?

It is a bit strange that it's not in the newsletter. Though that was sent about 7 days ago. Perhaps it was a bit too early?

What kind of Trinnov setup are you running?
L

I have an 8/16 Alt32 with Meridian dsps and had lots of problems with pops , clicks and audio dropouts so I’m probably a bit eager to see if the update improves my experience

Whoa. That's odd. And they haven't taken care of that for you?

I would have assumed Trinnov would be falling over itself to make sure your system is running lean and mean!
L

They have tried to be sure but Covid got in the way so nobody could come visit only OTA . I think at this stage they think it's a Meridian problem and they do not have very good Customer Service record in recent years . However , Trinnov replaced my unit , Meridian replaced my 271 Controller , I've replaced all cables including DB25 and moved kit into a rack in the next room over the 2 years of ownership so far to no avail .

Anyway , this is probably why I am more anxious than most to get the new firmware installed in the hope of a miracle !