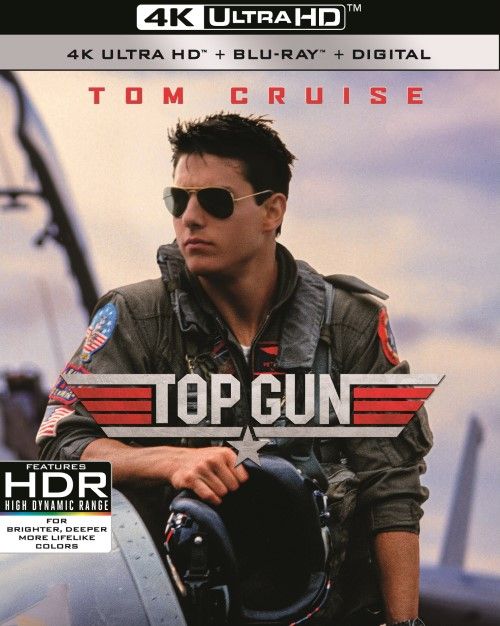 Movie
With the addition of the Paramount Presents line has also come forth a few films that are not only MASTERED in 4K, but actually given the 4K UHD treatment. This week it's a trio of Tom Cruise goodness with one of hte most classic and iconic Cruise movies ever created getting the golden treatment. Yup, you guessed it, the need for speed flick itself, Top Gun.

I don’t think there are many people alive who HAVEN’T seen Top Gun. It’s one of those films that like “Star Wars”. When someone mentions not having seen it before you look at them like Stewie Griffin going “say whaaaaaaaaaaaaaaaaaaaaaaaatttt?!” in shock and horror. It’s a movie that has gained cult status amongst those of us who grew up in the 1980’s and most people would be surprised how many pop culture references came directly quoted from Top Gun. While the title Top Gun is what most people call it, I have a few alternate titles that seem to fit it quite well. “Machismo Unleashed”. “Take My Breath Away: The movie” (seriously, I’ve never heard a movie ram in that song so many times). “Testosterone, it’s what’s for dinner”. Basically if you can read between my very tongue in cheek lines, Top Gun is a hysterical mess of 1980’s cheese in a way that has aged badly, but still remains a blast to watch. Especially when you start to realize that is a soap opera for men.

Pete Mitchell, call sign Maverick (Tom Cruise) and his wingman, Goose (Anthony Edwards, best known for playing Dr. Mark Greene in the TV show, “ER”) are the best of the best in their group of the Naval airmen. Well, ALMOST the best, as they are pushed into the #1 slot after one of their team mates cracks under pressure and leaves. This would all be well and good if Maverick was not the cockiest son of a gun out there. A cockiness that borders on stupidity and recklessness. After gaining the #1 spot, he and goose are sent to the elite training camp of the Navy, Top Gun. Set up against the best of the best from all over, they are graded and trained to become even better pilots, and those who don’t make the cut get more than a black mark. They’re sent packing.

While it’s all fun and games to Maverick, things get serious real quick when he falls for instructor Charlie Blackwood (Kelly McGillis), a gorgeous blonde civilian attaché who has just been put under missile lock from one Pete Mitchell. The two instantly hit it off, and against her better judgement, Charlie actually ends up dating the cocky pilot. While this may seem like the perfect score for Maverick, he has to come face to face with his own insecurities and stupidity when everyone in the entire class ends up hating him, most of all Iceman (Val Kilmer), who feels that Maverick is too rogue for the group. Fighting for the top spot in Top Gun is more than a game. Something that Maverick has to learn the hard when his copilot and he are involved in an airborne accident which ends up costing Goose his life. Faced with being a burnout or overcoming the raging guilt, Maverick has to fly head on into his own subconscious and find a reason to go on.

Top Gun is a magnificent example of the 1980’s and Tom Cruise when he was on top of the world. 23 at the time of the filming, Cruise had come off hits like “Risky Business”, “Legend”, and “All the Right Moves” and the cocky charisma that he is so famous for just seeps out of every pore here. The plot hasn’t aged well, with the cheese being more copious than a nacho plate at a brew pub, with a lot of machismo being poured on for extra good measure. Shirtless volleyball scenes, Cruise riding around on that Kawasaki Ninja 900 (being an avid cyclist one of Cruise’s trademarks in a film is driving around on some form of a motorcycle), The sheer testosterone that was gathered from every male on earth and then put in a bucket to be mopped around every square inch of the film, etc. etc. etc. Even though it is a bit short in the believability and seriousness factors, Top Gun is able to overcome its problems mainly due to the impressive aerial combat maneuvers and flying skills shown on screen. While it’s goofy, and overly soap operaish in nature, the flight sequences were a marvel at the time and still hold up incredibly well today.

Top Gun is an icon in cinema, and there’s a reason people talk about Top Gun glasses” or quote lines like “I feel the need…the need for speed!” or think of the movie every time Kenny Loggins “Danger Zone” is played on the radio (or mentioned on Archer). The stars were shining at their brightest and while Cruise and Kilmer were the top billed actors, there are a lot of fun cameos from up and coming stars as well. We get to see a VERY young Adrian Pasdar (“Heroes”, “Burn Notice”) play a bit part as a pilot, Meg Ryan as Goose’s wife for only one or two scenes, and a still young Michael Ironside as one of the Top Gun flight instructors, call sign Jester. It’s fun, it’s goofy, and it’s completely a product of the 1980s. It’s Top Gun

Paramount has given Top Gun a very impressive upgrade to 4K UHD with a native 4K master that does right by Tony Scott’s heavily stylized filming nuances. Top Gun is not a flashy film, and the upgraded doesn’t suddenly make it a crystal clear Transformers movie. Scott is obsessed with using good film stock with heavy grain, as well as varying shades of yellow throughout the film, giving it a weathered and aged look. The grain is a bit chunky in certain scenes, there’s a few spikes as well, but it seems to be source related as the old Blu-ray has those little quirks as well. The grain is normally very even with good detail pushing through, and the upgrade to 2160p really shows how much the 35mm film stock has to offer. Facial details are stunning, as you can see every drop of sweat on Maverick and Ice Man’s face, as well as scars and other scrapes that show up so much clearer. The inky blacks of the HDR and DV make the film incredibly rich and vibrant, as the shadow scenes (such as the infamous ice cube scene) showcase some incredible levels of detail that I hadn’t seen before. Colors are warm and burnished, with ruddy facial tones and a yellowed look that Tony Scott seemed to put in most of his films. There are some arial shots that look more natural and less color graded, but then there are times on the ship where you can really see that weathered and aged look come through.

The movie is not going to blow you away if you’re used to modern digital filming, but as an upgrade over the VERY worn Blu-ray that we’ve had for a LONG time on the Blu-ray format, this is a stunning revelation that really gives the movie new life. It’s very faithful to the source material and Scott’s color grading preferences and the despite those few flaws I mentioned at the beginning of the video review, this is one impressive looking “film” (yes, actual film).

One thing Top Gun is REALLY renowned for is it’s audio mix and it’s score. The sound track is one of the most legendary mixes of 80s pop rock out there, and deserves a track with pulsating energy and robust surround usage. Luckily the 4K UHD disc doesn’t let us down, giving us a very nice Dolby Atmos track that fleshes out the audio rather impressively. The roar of fighter jets rattles every window in the house, and the surrounds are wildly active with dog fights, blaring guitar riffs and cheering pilots. The sound has never been this rich and it actually does edge out the already impressive Dolby TrueHD 5.1 track that we’ve been privy to for the last decade or so. The heights are a bit constrained compared to some others, but it’s most likely an issue with 5.1 mixing up to an Atmos track. The overheads utilize a single “layer” (so to speak) giving us mono overheads (not a wild deal, as the film was never originally intended for Atmos back in 1986, but something to notice if you’re expecting multiple overhead zones). Planes shriek by overhead and the bass is crushing. The mix isn’t overly aggressive and I heard some audio sync issues around the 1 hour and 26 minute mark (which does vanish after a few seconds) and some pitch issues that come and go, but overall the Atmos track does the film proud.

I’m not so sure that Top Gun has aged that well over the years, but is a FUN bit of 80s cheese nonetheless. It’s been iconicized in American cinema, and has been a staple release for Paramount over the years. The 25th and 30th anniversary editions that came out were a solid Blu-ray disc, but Paramount went the extra mile and finally gave it a brand new remaster (which is also included on the Blu-ray disc in this combo pack, and not just relegated to the 4K UHD disc), as well as cramming in a FEW more extras and decking it out with a nice Dolby Atmos track. I’ve seen literally EVERY version of this film on home video from VHS to 4 different variants of the Blu-ray format, and this upgrade is very much worth it as Tony Scott’s raw filming style translates well to 2160p. The new 4K remaster of the Blu-ray itself is also a welcome addition for those who haven’t upgrade to 4K yet and the new extras revealing. Definitely worth grabbing if you’re a fan of the film.

Thanks for the review. Agree, great film and I am happy to see that the upgrade is good as well.

My copy should be arriving.... today! Look forward to experiencing this re-release! Great review, Mike. Lots of detail in there not revealed by some of the other reviews I’ve read.

Mike... can you ship us some advance 4K copies of Maverick?!?

Todd Anderson said:
Mike... can you ship us some advance 4K copies of Maverick?!?

I will definitely be adding this to the collection. Thanks for the review.

I liked the 3D version
E