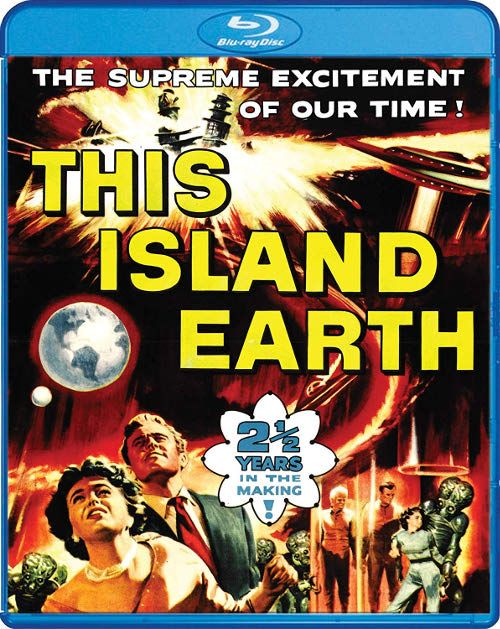 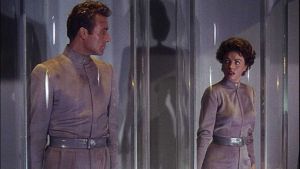 Movie
Scream Factory once again digs back into the 1950s universal Sci-fi/horror catalog titles and pulls out one of the most well known titles of the time. Ironically, The Island Earth is actually less well known on it’s own, but really REALLY well known for being made fun of, as it is the movie that Mike, Crow and Servo are riffing in the infamous Mystery Science Theater 3000: The Movie. Scream Factory (as a subsidiary of Shout Factory) has gone back to the original negative and pulled a brand new 4K scan for this release, and packed in more extras than we ever could have hoped for in order to bring us another slice of 1950s radioactive cheese to enjoy.

Dr. Cal Meacham (Rex Reason) is a nuclear scientist on the verge of a giant breakthrough in nuclear physics when he is handed a mysterious puzzle. A puzzle that points him in the direction of a man named Exeter (Jeff Morrow), a man just as mysterious as the puzzle. Execter transports Meacham to his private laboratory in Georgia and explains to the scientist that he and the other brilliant minds are heading up a veritable think tank to end war. Though the situation is suspicious, Cal agrees to work on the project with Exeter and several other scientists that Exeter has rounded up. However, things aren’t exactly as they seem, and soon Cal gets suspicious. With the help of the beautiful Dr. Ruth Adams (Faith Domergue) Meacham attempts an escape, only to be captured and whisked away by the duplicitous Exeter to a far away planet named Metaluna, where the inhabitants wish to use their nuclear theories to escape to Earth and rule via mind control. 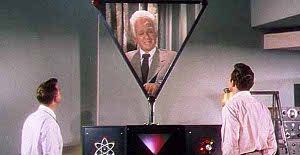 This Island Earth is a lovely cheese fest, and one of those movies that you might ask yourself “is this a good movie? Or a bad movie?”. In that I would say that it depends on who you talk to and what expectations you had going in. The film is typical of the 1950s Sci-fi films of it’s time, intent upon putting Nuclear energy at the forefront of all experimentation, as well as the doom that could eradicate us all. It’s a blast when watched in the right frame of mind, or as a lover of classic science fiction, but can also be seen as a bit hokey when compared to modern science fiction. It’s not even the greatest of the 1950s, but rather a good solid entry that has been further enhanced by the great restoration work that Scream Factory has done for it.

I’ve always seen the movie as a part of the Mystery Science Theater 3000: The Movie watching experience and was always confused by a few plot points that went unexplained. The explanation of why Ruth didn’t know Cal, the exact reason of Metaluna’s demise etc. Well, it seems that the MST3K film had cut out about 1/3rd of the film in order to make it fit in the desired time slot and as such the inserted bits that were cut out there makes the watching experience much more cohesive. As a whole, it’s a very solid movie and not nearly as awful as the Mystery Science Theater 3000: The Movie made it out to be (don’t get me wrong, the MST3K movie is absolutely HILARIOUS, but the added scenes allow it to be enjoyed as a movie a bit more). 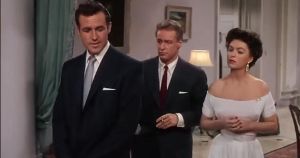 Scream Factory has announced a full on 4K scan from the original negative and has given us the movie in both the theatrical 1.85:1 format as well as an open matte 1.37:1 oldschool “fullscreen” edition that was shown on TV. Comparing both side by side it’s hard to tell any noticeable differences outside of the aspect ratio change, so choose whichever version you like without worry, they both look great. This Island Earth has never looked this good, EVER. I was actually shocked at how clean and pristine it looked with the new scan. There’s a little bit of print damage here and there, and a few wonky scenes (such as when Cal and Ruth are running for the plane as Exeter’s ship is taking off), otherwise this looks immaculate. It has a distinct 35mm film presentation look to it, with strong colors (pushing red towards the facial tones), and really great clarity. You can actually see textures never seen before on Metaluna’s surface, as well as the lab. Simply put, this is a top notch transfer that shows Scream Factory can really deliver the goods. 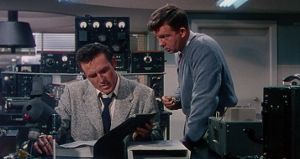 Scream has also provided us with a duo of audio tracks to enjoy as well. The first being a traditional 2.0 DTS-HD MA mono track that sounds really good, and a brand new 3.0 DTS-HD MA Perspecta Stereophonic track that has been completely restored by 3-D Film Archives. Comparing both side by side, it’s easy to see why the 3.0 track gets the nod. The 2.0 track is quite good at delivering the audio, but the 3.0 track really opens up the sound field quite a bit. The space ship sounds whoosh from both directions, as do the rumbles and roars of the interociter. The score sounds more enveloping and richer, and the dynamics just a bit punchier. The dialog is strong for the most part, but it’s real weakness is the mild analog hiss that comes in every once in a while, as well as few vocal volume dips and a little bit of harshness. Most of this can be attributed to the age of the film as well as the recording equipment used, and the only reason I didn’t rate it higher is simply because that vocal harshness from the recording is actually decently noticeable. It's still a very solid track though, and nothing that would ever turn me away from the disc, as this is how many of these older 50s movies sound and it's a byproduct of the recording equipment used 64 years ago. 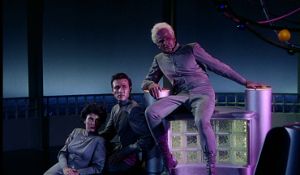 • BRAND NEW 4K REMASTER OF THE FILM FROM AN INTERPOSITIVE
• PRESENTATION OF THE FILM IN 1.85:1 AND 1.37:1 ASPECT RATIOS
• NEW The Original Perspecta Stereophonic Sound restored by 3-D Film Archive
• NEW Audio Commentary with author and Academy Award winning visual effects artist Robert Skotak
• NEW Audio Interview with film historian David Schecter on the music of THIS ISLAND EARTH
• NEW Alien Ideas – an interview with filmmaker Luigi Cozzi (Starcrash)
• NEW Facts about Perspecta Stereophonic Sound by Bob Furmanek
• THIS ISLAND EARTH – Two and A Half Years in the Making: The Extended Documentary – a look at the making of THIS ISLAND EARTH
• WAR OF THE PLANETS: 1958 Castle Films release for the home market including both the 50-foot silent Headline edition and the 200-foot sound Complete edition.
• Trailers from Hell – This Island Earth with commentary by filmmaker Joe Dante
• Theatrical Trailer
• Still Galleries – poster and lobby cards, publicity stills and behind-the-scenes photos

This Island Earth is a fun little sci-fi classic from almost 65 years ago, and actually stands on its own outside of the MST3K universe. And no matter how seriously I try to watch it, I can still hear Mike, Servo and Crow riffing the movie every step of the way (my wife and I were quoting the riffs for most of the film). Scream Factory has done an absolutely fabulous job with the disc too. The audio is a newly restored 3.0 and 2.0 Mono track, as well as a brand new 4K scan that makes the movie look like nothing I’ve ever seen it look like either! The extras are abundant, making this one excellent release for ans of 50s sci-fi. My ONLY complaint is that I felt Scream/Shout missed out on an opportunity on putting the Mystery Science Theater 3000: The Movie disc in the package as well, or included it as an extra, as it would have been the perfect accompaniment. All in all, a great watch for sci-fi fans.