The Kid Who Would Be King - 4K Blu-ray Review

The Kid Who Would Be King 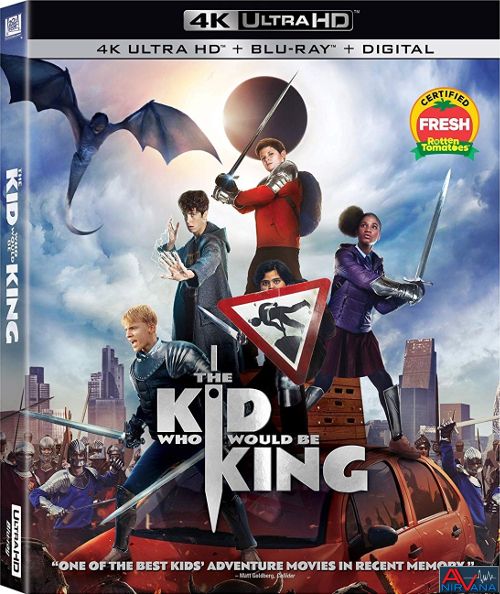 Movie
The legend of King Arthur is one that has been literally done to death in live action movies, and The Sword in the Stone was considered one of the weakest of Disney’s older animated films (and given an atrocious transfer to Blu-ray I might add). The Arthurian legend is one of the staples of film history, having been invented and reinvented over the years in countless iterations. It seems to be a habit of studios these days to be redoing the old classics, with sometimes painful results (the new Robin Hood is testament to those painful results), but none are as unique as Joe Cornish’s The Kid Who Would Be King. Cornish is most known for his 2011 British film Attack the Block (The Kid Who Would Be Kind is only his second directorial job for a feature film), which was an incredibly fun alien invasion romp about kids protecting south London from said aliens. The Kid Who Would Be King takes the same cheeky humor and fun action and blends it with a modern Arthurian legend, crafting something completely new, but DEFINITELY geared towards prepubescent teens in it’s approach of the old legend.

The film opens up with an animated little prologue about King Arthur, his rise to power, and his subsequent battles with his evil half sister Morgana. With the help of Merlin he’s able to quell her hunger for power and curse her to survive as a prisoner in the bowels of the earth thanks to the magic of Merlin. Fast forward a few hundred years and we segue back into the live action world where 12 year old Alex Elliot (Louis Ashbourne Serkis, son of Andy Serkis) is getting beaten up by the big kids at school in defense of his friend Bedders (Dean Chaumoo). However, Alex is in for a surprise when he stumbles upon a sword sticking out of a giant cinder block (we can already guess where this is going) and is able to pull it out. Suddenly his life is turned upside down (I dare you not to hear Will Smith when reading that) as the magician Merlin appears (Angus Imrie as young Merlin, and Patrick Stewart in his old man form) and informs him that in 4 days an eclipse will cover the earth and Morgana (Rebecca Ferguson) is able to walk the earth once and come for the sword.

In order to defeat Morgana, Alex and Bedders team up with their own bullies, Kaye (Rhianna Dorris) and Lance (Tom Taylor), and set out upon a quest to find the entrance to Morgana’s lair and end her before she can walk the earth. However there are stumbles and pitfalls along the way. Alex is still just a child and is bound to make childish mistakes. The first comes in recruiting his own bullies as knighted allies, and the 4 young children are at each other’s throats the entire way. The second comes in the form of Alex’s own misconceptions of the Arthurian myths. What he thinks is the noble path to follow soon turns to ash, and he is forced to confront his own demons and overcome THEM before he can hope to confront the evil Morgana.

The Kid Who Would Be King is a bit of a mixed bag. On one hand there is a ton of things to life, with Joe Cornish’s trademark cheeky London humor shining through. Alex is a chubby cheeked kid who you love to watch grow, while Kaye and Lance feel very much like the snarky teenagers from Attack the Block. The battles are actually quite spectacular for their budget, but there is a flip side to this coin. The film aims itself squarely for the younger generation, and with many young kids films it gets a bit preachy at times. The lessons learned are blatantly obvious to those who have seen these types of films before, and it kind of beats you over the head with some of the life lessons that they have to learn. The same can be said about some of the interactions, as even the battles (as fun as they are) are geared towards a younger audience and seem a bit cheesy at times.

The film is a load of fun, but also a bit wince worthy at the same time. There are equal parts great and equal cringe worthy alike, but the film really survives off of Joe Cornish’s cheeky writing and Louis Serkis’s complete likability. The kid is annoying as all get out (like most 12 year olds), but just earnest and sincere as ever could be. The rest of the cast does a good job, with Angus Imrie knocking it out of the park as the effervescent Merlin (he’s easily the best part of the movie).

The Blu-ray disc is a near perfect disc, and the 4K UHD transfer sports a very very nice upgrade over it’s 1080p counterpart. Shot on Arri Alexa cameras and then transferred to a 2K digital intermediate (by my accounts. IMDB and most other sources don’t say the final resolution of the master, but a few tidbits of information on facebook leads me to believe it’s a 2K master), the uptick in visual clarity and HDR color usage is instantly apparent. The grungy look of London is cleaner and clearer, with more textural details appearing along walls and inside the Elliot home. The HDR usage is really stunning here, with the glowing orange of the demons popping off the page, to the bright shiny blue of clothing and glimmering silver of battle armor. The blacks are deep and inky, showing off a lot more detail than expected in the end battle with Mogana and showing no signs of digital artifacting. There’s some wonky CGI here and there, and you can see a few green screen effects, but this is a very nice looking 4K UHD that is pretty close to being perfect demo worthy in many scenes.

Unlike the Blu-ray that got a 7.1 DTS-HD MA track, the 4k UHD disc is given a full on Atmos track to enjoy, and like many of the 20th Century Fox 7.1 encode,s the Atmos tracks is not THAT different than it’s slightly lesser counterpart. The Atmos track is a kicker for sure though, with a great front end of the room for the more dialog centric bits, and a sweeping sense of immersion for the action and adventure the movie has to offer. The film jumps from London to the outskirts, to underground and back up against, so there is quite the variety of locals and differing tonal areas to choose form. London is more busy and filled with the sounds of traffic, while the plains of Tantegal has the sounds of whipping winds and creaking branches to fill out the ambient sound design. The final battle with Morgana is simply stunning, with the swirling sounds of her wings and the clashing of blades makeshift battle armament coming from all sides. LFE is crushing and weighty, adding some great low end throughout the film and offering a few moments that dip into the mid to low teens (there’s one where Merlin fights off some evil trees that literally hit DEEEEEP and was probably the single lowest point of the whole movie (at least at high DB levels). Vocals are crisp and clean and the rest of the track is evenly balanced as well. A killer track for sure.

​
The Kid Who Would Be King is by no means a perfect film, and I do enjoy Cornish’s Attack The Block a bit better, but this is definitely something that many people have been craving for quite a while. Good, FAMILY entertainment. A movie that is enjoyable (even if not great) to most people across the age spectrum, and wholesome enough to satiate most family needs for a cross generational movie watching experience. The film is fun, a bit cheesy at times, but solidly entertaining and a visual treat on both Blu-ray and 4K UHD. The extras are a tad slim, but the technical specs for the audio and video are jaw dropping and well worth checking out.

Thanks for the review. This one looks interesting. Will see if kids are interested in checking it out.