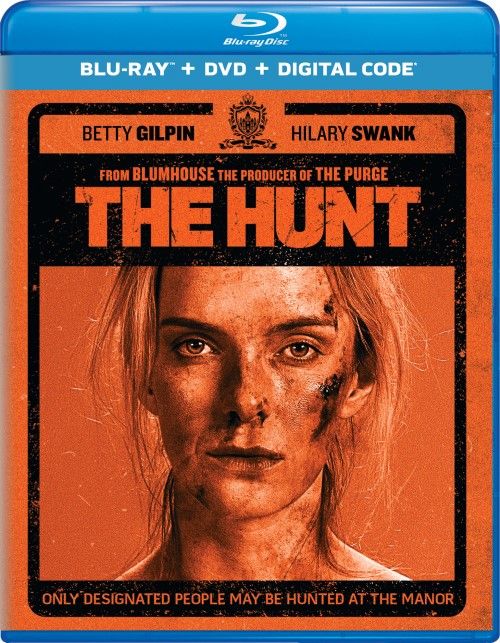 Movie
Ahhh, The Hunt, the last of the pre covid-19 films. I remember hearing about the film over 6 months ago, but it wasn’t till Twitter, Facebook and various forums blew it up that I really paid attention to it. The basic premise is that a bunch of liberal elites are hunting a bunch of “deplorables” (we can thank Hillary for that timeless classic) for sport. Once that little tidbit leaked the entire Internet BLEW up as right wingers got their knickers in a twist, and liberals yelled at the right wingers. The release inevitably got delayed due to the bad publicity and was finally put into theaters literally one weekend before all the theaters started closing down due to the nationwide Covid-19 lock downs. The film has got some new legs as it began to be digitally streamed for all of us cooped up people and FINALLY gets a Blu-ray and DVD release this last week (although we got slightly delayed reviewing it due to the George Floyd incident that sparked nation wide protests. Poor movie seems destined to be delayed).

The funny thing is, that 99% of the bad publicity was an over reaction by people who had not seen the film, but took that little tidbit about hunting “deplorables” and freaked out. You know, the typical twitter reaction. The reality is, story takes its basis from the iconic short story “The Most Dangerous Game”, slaps some left vs. right politics in as the framework, and just has a gory good time with itself. You got that right. This is not some giant ploy by the left to demonize the right. It’s a Jason Blum horror film with guns, gore, dismemberment, and hilariously laughing at both sides of the political equation as it does it.

12 people are randomly (or seemingly so) kidnapped by rich snobs, and then set down in the middle of nowhere and hunted for sport. No one has any idea of what’s going on, but once the bullets start flying, these basket of “deplorables” (yup, they’re all republicans) grab whatever weapon they can find and start fighting back. It was supposed to be an easy game. Give the poor rednecks a few weapons while the puppet masters hunt their prey, but there is a sour apple in the bunch in the form of Crystal (Betty Gilpin). You see, Crystal isn’t just a weak redneck like the rest. She has a particular set of skills (to borrow a phrase from Liam Neeson) and she knows how to use them. And she’s not just content with getting out alive. She wants her pound of flesh, and by golly, she’s going to get it.

The Hunt is no high art, and it’s certainly not a major political statement. Sure, the political lines are there in spades, but there’s no nuanced statement, or even a blunt one. Instead director Craig Zobel just uses the left vs. right animosity that’s going on, and turning up the volume to level 11, and beats you over the head with it. We have snobby assassins who apologize for misgendering pronouns, who argue about whether you can call people of color “black” or “African Americans”, and we have gun toting rednecks muttering about the 2nd amendment and the like. At the end of a day it’s almost a parody vehicle for Crystal to meet up with head hunter Athena (Hillary Swank) and kick some butt. Well, that and have gory head shots, explosions, and various dismemberment throughout as well.

In the vein of other “The Most Dangerous Game” inspired film, we already know the outcome. Betty Gilpin does a great job with Crystal, giving her a southern fried flavor that reeks of stereotype, but also making her a bad mama when it comes to combat. She makes the character rough, tough, and just vulnerable enough so that you get to really like her character and root for her to get out alive. Hillary Swank doesn’t have as much of a role, but she hams it up as the clueless “elite” who ends up signing her own death warrant with a joke about “Manorgate” (every other gate was taken, so why not Manorgate?). All in all, this is pure dumb Blumhouse action/horror.

Rated R for strong bloody violence, and language throughout.

The Hunt is captured on digital cameras and then transferred to an unknown resolution master (guessing 2K due to the budget), and the resulting is quite nice. The movie is generally rather dim and in the shadows, but there is quite a bit of fine detailing to make out. There’s some softness to the picture in the underground bunker, but the daylight scenes are generally dazzling. Faces are well defined, contrast is balanced, and outside of a little bit of digital noise it’s a solid looking release for a budget Blumhouse horror film.

The best part of the whole film is probably the audio mix. Universal gave the flick a 7.1 DTS-HD MA track, and that track really shines. The outdoor arena gives host to a ton of surround activity, with bullets whizzing by overhead, arrows striking into flesh from the rear, and the rumbling of trains over the trestle. Bass is restrained when it needs to be, but when the defecation hits the rotary oscillator, things get real intense, real fast. Dialog is crisp and cleanly located up front, and even the forest sounds are evenly balanced in the rear channels. It’s a great all around mix and a definite sonic treat.

​
I liked The Hunt WAAAAAAAY more than I thought I would. After all the bad publicity and the constant delays, I figured the movie was DOA, but after watching it, I really had to roll my eyes at the people who jumped the gun and tried to destroy it based upon limited information. If you’re a fan of big dumb fun with lots of gore and wit, the film will do you just fine. If you’re looking to be offended by anything political (even if it’s parody), then you’re probably not going to have as much fun with it. Universal’s Blu-ray release is very solid, with good video, great audio, but a rather meager set of extras. Fun Watch is my personal recommendation.

We watched it last night. Very enjoyable and entertaining.

Thanks for the review. Will check it out based on your review.