The Hate U Give - 4K Blu-ray Review

The Hate U Give 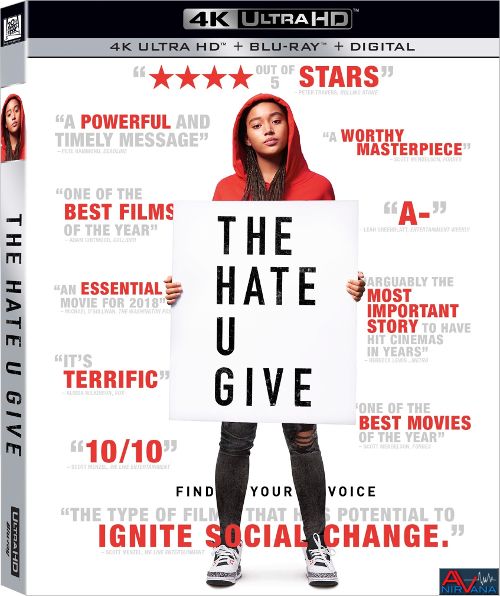 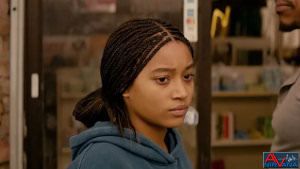 Movie
One of the most polarizing film genres (or sub genres) that you can think is dealing with race relations. It’s such a hot topic and one that can go in either direction on the quality scale depending on HOW it’s handled. There have been some great films recently touching on the subject matter (Blindspotting, Get Out) and there have been some horrible ones (River Runs Red), and very few ever fall into the “meh, that was pretty solid category). However, The Hate U Give has been given some rave reviews by critics and some very solid audience reactions on the surface (I reiterate, ON THE SURFACE, being that when I saw the movie blind and started researching some more I found very mixed reviews), so I was hoping for another great Spike Lee type of movie, or another Get Out (which was my favorite film dealing with racial issues in the last several years). The book was hailed as fantastic, but I was completely blindsided by the movie when I first saw it. Going more in depth into the back story of the film and the novel by Angie Thomas I realized that it was a Young Adult novel, and things started clicking into place. It’s not that I was offended by the film, or that it brought up subjects that I was uncomfortable with. It’s that the subject matter was handled with the finesse of a drunken sailor, and painted in such broad and exaggerated strokes that I couldn’t help but notice the typical “young adult film” failings.

I honestly saw the film three times in as many days before giving this review. With such a serious subject matter and being one of the seemingly lone critics of the film I wanted to make sure I understood everything fully. Was I reacting to the film’s message in a way that was purely emotional? Was I judging it too harshly? Or was I looking at it through a different lens than the director wanted the audience to look through it at? My end criticism is not that the movie touches on subject matters that are uncomfortable or wrong, but that the movie itself was so syrupy and sickenly over powering with its message that the storytelling is just a side point for an emotional outpouring from the writers/directors.

Angie Thomas’s novel “The Hate U Give” was based off of the decade old shooting of Oscar Grant on Fruitvale Train Station (where the movie Fruitvale Station starring Michael B. Jordan was crafted), where a BART Cop thought that a cell phone was a gun, and shot the young black man. This started off a nation wide debate about police accountability as well as discussions on when “shoot first and ask questions later” was justifiable. However in this story it’s a little bit different. Starr Carter (Amandla Sterling) is raised in a poor part of town, with an ex gang banger father named Maverick (Russell Hornsby) teaching her that black people have to live more carefully than white people do when it comes to police interactions (pounding into their heads the 10 points of the original Black Panthers creed). After a childhood shooting where Starr was nearly killed, her mother (played by Regina Hall) puts Starr and her brother Seven (Lamar Johnson) into the rich, upscale school across town so that they could be studying instead of catching bullets. 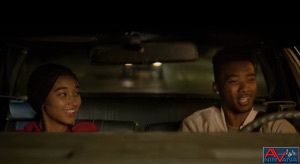 While at her school Starr is forced to the life of the preppy black teen, metering her words so as not to seem too ghetto and “thuggish” (for lack of a better word). At home in her lower end neighborhood she reverts back to the more traditional dialog and language of the stereotypical (I emphasize stereotypical, as the film’s dialog is slathered in an extra thick layer of collard greens and fried chicken type of stereotyping) . She even has the preppy white boyfriend who doesn’t see race, and the two white friends (one of whom naturally ends up being a racist later on in the film) to help her feel normal. However, her dual world is brought to an end when she accepts a ride home from her childhood friend Khalil (Algee Smith) and they are pulled over by a cop. Khalil inevitably gets shot by the officer (being that it’s based off of the Fruitvale Station incident, it was expected), but not after doing EVERYTHING wrong for a traffic stop (smart mouthing the cop, arguing with him, not following directions, and THEN leaning into a car, in the middle of the night, when the officer told him to stay put, and pulls out a hair comb in dim lighting). Now Starr is the “star” witness in a grand jury indictment as the justice system decides whether the officer made a justifiable mistake, or whether the officer is going down for murder one.

From there the movie is a tale of Starr and her personal journey at dealing with the knowledge of her friend’s death, and dealing with the anger that results. However, there is some major MAJOR problems with how the film works these events out. One of the biggest problems stems from the inciting incident, which is Khalil’s death. While I fully admit that police brutality does happen at times, and bad shoots happen as well, they chose an incident which was INTENDED to be a black and white situation to inflame the audience’s ire against injustice, but ends up being rather hollow if you look at it objectively. The end result is a situation that is so muddied that you should be feeling empathy for both parties involved. We have a situation with what seems like a biased cop, but then you watch as Khalil does EVERYTHING wrong that he could possibly DO wrong in a traffic stop. The end result is a tragic loss of life off of a misunderstanding and a few split 10ths of a second judgement call (something that the film doesn’t go too far into), and the rest of the film’s rage and righteous indignation is tainted by the realization of that muddied waters. Starr’s uncle Carlos (Common), who is a black cop, tries to give an alternate point of view to Starr, but the film makers are so intent on having Starr be right that they don’t allow him to delve into WHY certain situations may carry different actions (I could write a thesis on the different ways that conversation between Starr and Carlos could have gone, but that’s just neither hear nor there), and the movie itself is covered in a thick syrupy layer of cheesy emotion stereotyping that I had a very frustrating time connecting at all with the main characters.

The thing is, racism exists. Hatred exists, and bad cops DO exists, but The Hate U Give was so sloppily done at times that it’s message was completely lost in a flurry of poor writing, over acting, and ridiculously stereotypical staged scenes. It wasn’t as bad as The River Runs Red, but it falls very much shorter of much better films who have touched on topics like these. A more recent film dealing with a police shooting of a young person of color is Blindspotting, which dealt with the subject matter much more honestly and much more realistically as well. While it’s not on the EXACT same subject, Get Out is another flick touching on racial conflicts while still being able to tell a compelling story first and foremost.

Now, there are some redeeming points of The Hate U Give. Amandla Stenberg is incredible as Starr. I may not agree with the writing that propelled her, but I can agree that Amandla did a stunning job at making Starr a visceral and powerfully emotional character. The saving grave of the film that actually made me interested in it was watching her character unfold and grow. Amandla is memserizing as the troubled teenanger, and as she adapts and grows into her true self you see her confidence and stability of personality emerge. The rest of the actors doe a solid job (although Common does very little but offer a stern sort of authority in the background), but this is really Amandla/Starr’s movie, and as such she is given the spotlight and SHINES in said spotlight. 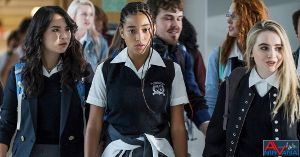 The Hate U Give was shot on 8K digital cameras, and then transferred to a 2K master for home video, and while the film doesn’t lend itself to really “wow!!” moments of clarity, it is a pristine looking digital movie on Blu-ray. Picture perfect to say the least. The 4K UHD shows a noticeable upgrade and is on the higher end of the acceptability scale for 2K mastered films in 4K UHD. Facial details and background textures show more nuance and attention to detail, and the use of HDR+ is excellent. Colors are varied and change depending on whom Starr is with (cool blues with her white high school, more ambers and earth tones back in her home area). Black levels are deep and inky, and I didn’t see any major issues of crush or digital artifacting to mar the picture. The movie itself isn’t one of those “wow! This is razor sharp!” type of movie, but the 4K UHD disc cleanly replicates the urban drama with pinpoint precision and accuracy.

For a dramatic film, The Hate U Give’s 7.1 DTS-HD MA track is rather nuanced and robust. The film is front heavy at times, with the score being the only source of surround elements, but those times are punctuated by some really powerful moments in the film. A raging protest with tear gas, gun shots ,and clattering police shields. A megaphone blasting from a car. The screeching of tires as the teenagers make their getaway. Or the thundering gunshots of a 9mm Glock to break the silence as Khalil and Starr talking during the fatal incident. Each of these are pinpoint precise, and the activity in the surrounds are visceral and shockingly engaging. It’s not a Transformers soundtrack, but the 7.1 mix is about as perfect as it possibly can be without calling attention to itself (this 7.1 DTS-HD MA mix is present on both the Blu-ray AND the 4K UHD).

​
I really actually wanted to like The Hate U Give due to the high initial reception to the film, and I REALLY liked Blindspotting a few months back, so I was a bit disappointed with how clumsily this one was handled. Honestly, I’m not too surprised when I realized that the book was a young adult book, and the film was directed at a young adult audience. It took a serious subject matter and handled it with the grace and finesse of your typical young adult post apocalyptic thriller, and watered down what could have been a compelling story. As I said, Amandla really gives a stellar performance and the movie itself has scenes that are really rather compelling and show signs of brilliance. It’s just frustratingly hidden behind ham fisted scenes that just chew the racial scenery to the point where the audience starts to feel disconnected with the subject matter. I gave it three separate watchings to make sure I wasn't missing something that other critics were seeing, but at the end of the day I have to be one of the few detractors of the film. 20th Century Fox’s 4K UHD disc sports a great video encode, as well as picture perfect audio and a whole bevvy of extras (although most are housed on the Blu-ray disc). I would give this one a rental before making up your own mind.