The Good Place: The Complete Series 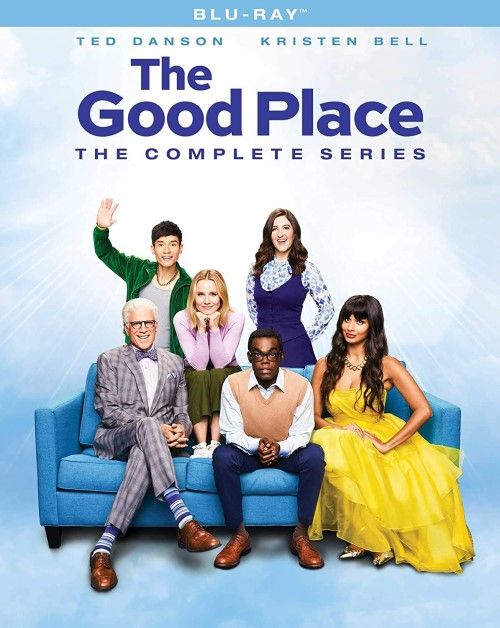 Movie
I’m going to admit that I REALLY wanted to watch The Good Place when it started airing 4 years ago, but decided not to simply because I had too many TV shows on my plate already, and juggling another one seemed overwhelming. That being said, my curiosity was extremely peaked due to the fact that I’d watch the adorable Kristen Bell in just about anything, and Ted Danson is a favorite genre actor as well (I always tell people that his portrayal of John Becker in the sitcom Becker is pretty much my spirit animal). But of course without starting the show when it aired I was left far behind and with little desire to catch up on ANOTHER show. That is until my wife started binge watching sometime in season 3 (maybe the end of season 2), so I would glance over her shoulder and catch tidbits of what was going on and get my interest peaked once again (ok, ok, ok, I MAY have stopped and watched a bit more than a few seconds when my wife was watch, if nothing just to drool at Kristen Bell).

ANYWAYS, I knew the show was wrapping up this last year and I got ready to Netflix binge it when I had the time, as I really wanted to watch the high def episodes of the series instead of the 480p DVDs that Shout Factory had released of seasons 1-3 to this point. THAT was when I got the press release from Shout Factory stating that not only were they releasing the 4th and final season in DVD like they had with the previous seasons, but ALSO a bit massive Blu-ray box set of the entire 4 seasons as well! And thus you have my impatient dilema. Wait months and months to watch the Blu-ray in it’s virgin form, or start the show on Netflix and polish off the review when this came out. Well, I’m happy to say that I actually kept my impatience under control until a week or so ago when I received the Blu-ray to review and binge watched all four seasons during the Covid 19 lock down to enjoy the show all at once.

I really do think that binge watching the show was the way to go, as it goes by so smoothly and fluidly in the 24 minute format that spending ages between seasons would have driven me nuts. Also watching all 4 seasons back to back proves one thing. This show could have been a one off season and no one would have ever been stuck with a “cliffhanger”. The first season of the series is probably one of THE best seasons of serialized television in TV history. No, I’m not over exaggerating. The first season is absolutely MAGNIFICENT as a single cohesive story. Seasons 2-4 are fantastic as well, and I have a sneaking suspicion that season one was created that way (as a close ended story in a way) on purpose, protecting itself from cancellation if the powers that be didn’t like it.

Well, enough of that. The series revolves around a cheeky mistake in cosmic history. Instead of hell with Lucifer (one of my favorite shows) we got “the good place”. You know, the place you go INSTEAD of the bad place? Kristen Bell is Eleanor Shellstrop, a woman who has just died and went to the good place where she is now in a perfect idyllic paradise that has been specifically sculpted to her deeds and nuances that she had on earth. The good place is inhabited by the cream of the crop of earth, only allowing in those who went above and beyond being “good” with their time alive on Earth. Buuuuuuuuuuuut, Eleanor is kind of a mistake. She was chosen, but chosen by accident as the deeds and things she did on Earth, aren’t exactly HER. They must have belonged to another mortal, so now she’s in “the good place”, and after getting there, is not so keen on letting Michael (Ted Danson), the man in charge, know that she’s a mistake so that he can throw her down to the “bad place” with the rest of humanity. 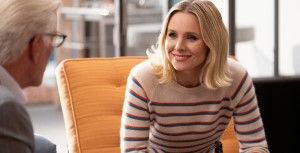 The base premise of the show deals with the existential quagmire of “if a person is bad all of their life, can they actually BECOME good?”, and does it in such a cheeky and fun way that it’s just infectiously hilarious to watch. The show managed to garner massive critical response and go for four seasons with the plot line, but I have to digress on some of the twists and turns. With individual seasons I’m sort of forced to give spoilers for the previous seasons to set up what happens in the latest review, but here I can sort of dance around that and just let you know that there are massive plot twists, turns and teases of dealing with the process of changing one’s character in the show. I’m not going to spoil them as it really DOES spoil 90% of the fun, but needless to say The Good Place is a character dramedy that thrives off of interpersonal relationships. This isn’t a show that needs to survive off of gimmicks and “hook” mysteries where characters get together, almost get together, and solve police crimes (sorry Lucifer, I love you to death, but that’s the one downside of the formulaic supernatural police procudural), but rather THRIVES off of just watching the characters advance and mature over the years. It’s fun, quirky and through all 4 seasons, a complete blast.

While I love the show to death I had heard through the grapevine (eg, my wife) that season 3 got off to a rocky start and to watch out for it. I will say that even though I was warned it was a tough road to hoe for the first few episodes of season 3. Seasons 1 and 2 were near perfect, and the stumbling out of the gate for season 3 really had me worried for the longevity of the series. Digging into the extras on the series shed some light why the show managed to overcome those hurdles though. The Good Place was not just a series renewed year by year flying by the seat of their pants. The creators actually had an episode count in hand before the series even aired, and were planning to end it at a specific point rather than just drag it out until the ratings went downhill. As such they were able to have a cohesive plan on where the show was going, and were able to get over that early season 3 hump and drive home for the rest of the year and finish strong with a great 4th season.

While there’s a host of characters in the show that are hilarious (Janet is one of my favorite), the series lives and dies on Kristen Bell and Ted Danson. I don’t care what people think, but I’d watch Kristen Bell narrate a math text book and watch it with stars in my eyes, but she really is fantastic here as Eleanor. She’s strong, powerful, weak, and completely flawed to the core, which makes her journey towards being a better person that much more believable. Ted Danson literally dominates as the goofy Michael, the architect of this part of paradise who has been given this section as his first “test” job as an architect. The two work together so seamlessly that you just can’t take your eyes off them.

Rated TV-PG By the MPAA

The 1.78:1 framed AVC encoded Blu-ray set looks fabulous across all 4 seasons. The show was given a really glossy and color splashed look, with gaudy primaries, strong pastels and all sorts of crazy variations (especially with the fro-yo, lots and LOTS of fro-yo). The CGI can be a bit hit or miss, as the series didn’t have the most massive budget, but was infused with tons off goofy situations that required lots of it (such as the flying portion on the first episode of the series). That being said, the details are “otherworldly” (yes, I crack myself up) most of the time, with strong clarity and stunning detail levels across close up facial shots as well as far away background images. It’s a great looking set for sure, and will be sure to please fans of the show greatly.

The 5.1 DTS-HD MA track ticks off all the proper check boxes, giving us strong dialog, good LFE, and prominent surround presence. The show is never THAT over the top and aggressive, but it’s more than capable of handling the kookiness of the show’s premise. Surrounds are active with swooshing sounds from above, and the LFE handles the booms and crashes that happen from various problems that occur in heaven, as well as the score. Dialog is crisp and cleanly located up front in the center channel, and everything balanced as it should be. Basically a very solid and very impressive mix for the dramedy.

The Good Place is very simply an excellent show that got a lot of attention by critics when on NBC, but never seemed to be in the spotlight if you know what I mean. That doesn’t mean that it isn’t great though, and Shout Factory going above and beyond to release the whole series on Blu-ray (despite only releasing the series on DVD as each season ended the last 3 years) was an unexpected treat. The visuals and audio specs are excellent as expected, and the complete series gets a solid extras packaging as well (some commentaries on episodes and a ninth special features disc as well). All in all, a VERY good watch at a very good price. Go grab it.