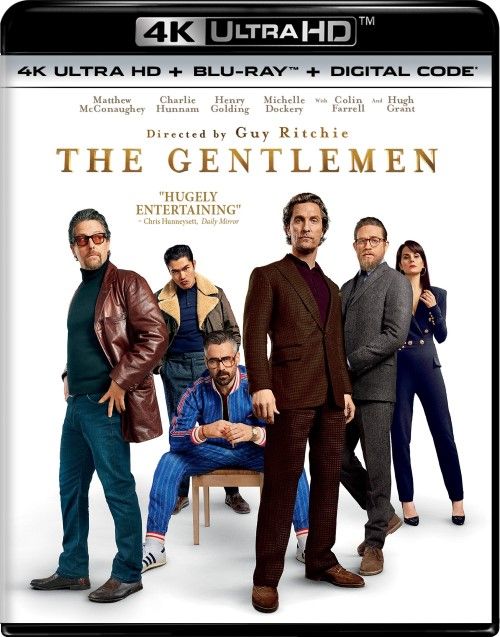 Movie
Ahhh, Guy Ritchie. The man’s name instantly brings to mind college outings watching Lock Stock & Two Smoking Barrels back to back with Snatch on a Saturday night. The man had a Tarantinoesque flair for dialog (just with a British flair), and he had a tendency of making a story within a story, within a story. Complete with twists, turns, double turns, and even quadruple turns before it gets to the verbose and cheeky ending that wasn’t seen coming due to the fact that Guy Ritchie always kept the most important bit of information that would be used to unravel the whole thing off screen, away from guessing fans who could figure things out with it in play. He was a genius in my young mind’s eye, and he still is. Snatch is perhaps one of my most watched Blu-ray and remains one of my favorite movies of all times. Even his foray into more traditional films with the Sherlock Holmes films with Robert Downey Jr. were rather fun, even if they were a deviation from traditional Holmes structures. That being said, Ritchie went into some rather odd directions for his normal Cheeky British gangster style with the 2019 live action Aladdin, King Arthur: Legend of the Sword (which I actually liked), and 2015’s bombing remake of The Man from U.N.C.L.E. . I know that a director has to spread his wings and go new directions, but the prolific gonzo director just wasn’t able to really grasp those genres well, and felt a bit out of his element. 2019 brought the man back full circle to his roots, going deep into the British gangster world, complete with typical Guy Ritchie dialog, and plenty of double and triple backs to keep the viewers guessing in The Gentlemen.

Like usual, we’re introduced to a whole plethora of sundry characters in the first few minutes, but the ones we’re really going to focus on is Michael Pearson (Matthew McConaughey), a British born American who is the U.K.’s largest weed distributor. He’s made a fortune for himself over the years, ingratiating himself with the highest class of people imaginable, but he has a conundrum. Michael “Mickey” is getting up in years and he wants to enjoy his golden years as a legit man, rubbing elbows with the elite and not having to deal with the day to day life of being a gangster. So he’s going to sell his entire weed operation (which will be worth billions in the coming years if handled right) to a Jewish gangster by the name of Matthew (Jeremy Strong) for a solid $400 million. Simple, easy, and quick.

However, nothing is ever quick in this world, as a private investigator named Fletcher (Hugh Grants) decides to pay a visit to Mickey’s right hand man Ray (Charlie Hunnam) and extort $20 million pounds from after getting some JUICY information about the deal that was suddenly going to go sideways. What unfolds is a crazy and chaotic merry go round ride as Mickey is suddenly forced to fight off attacks from all angles, as everyone smells his sale of the business as weakness and are honing in for the kill in hopes of tearing what flesh they can off the bone before it’s all gone. Leaving poor Mickey in the position of having to fend off his business from said unscrupulous knaves in a battle of whits that con only leave one criminal standing.

The Gentlemen is actually the best movie Ritchie has come out with in the last decade, maybe more. It’s not exactly Snatch or Lock, Stock, and Two Smoking Barrels, but I’m not sure he’ll ever be able to top his first two masterpieces. Those are Cockney gangster legends in the film world and some of the most fun and exciting comedic mysteries of my time. That being said, The Gentlemen is a true return to form for the director, and he’s firing on all four cylinders. There’s a LOT going on in the movie, in many ways is where all the fun is. Ritchie dances around with at least a dozen different characters, revealing quirks and plans, and double crosses throughout the film to keep the audience guessing what happens next. The problem with most mysteries is that he audience can GUESS where the ending is going just by following clues throughout the film. Ritchie is a classic in that he loves to keep one pertinent bit of information out of the script until the last minute. A single bit of information that suddenly makes everything make sense once that puzzle piece is dropped in. That way the audience is missing a key element to keep them from figuring things out too soon. It was a trick that Sir Arthur Conan Doyle famously used in his Sherlock Holmes short stories and novels, and something that Ritchie has mastered as well.

The film is exciting, twisted, violent, hilarious, and purely Guy Ritchie to the core. Everyone is magnificent in their roles and the ending, while a bit anti-climactic, fits in perfectly with the opening theme of the movie. Charlie Hunnam is actually excellent for once instead of being a wooden board, and watching Hugh Grant ham it up on screen as a sleazy P.I. with an angle is hilarious. However, it’s Matthew McConaughey who really shines as Mickey Pearson, the crazy and contingency prepared weed gangster. He’s cool, calculated, and smooth as $150 scotch down the gullet. The movie itself suffers a bit in the 3rd act with a bit too much going on, but that final 20 minutes is just gold. Everything unfolds like vicious clockwork, and every loose end tied up neatly in a boy, leaving the audience with a satisfied grin on their faces.

According to most sources, The Gentlemen was shot using digital cameras at 3.4K and then transferred to a SLIGHTLY upscaled 4K digital intermediate for the home video presentation, and then stylized with some faux film grain and color tweaks. Either way, the end result is spectacular, and the faux film grain actually had me thinking that it was actually 35mm film for most of the watch. The color grading is a bit bleak, but still color neutral, but infused with an almost hazy, or gauzy look that is definitely an intentional thing know Ritchie’s visual film history. Everything is clean and precise, with good facial and background details, with HDR enhanced primary color splashes that can jump off the page (such as the green grass at Ray’s house). The 4K UHD disc actually handles the hazy look of the film much better than the Blu-ray can, as it doesn’t look nearly so washed out as a result and the various artifacts (such as banding) are nowhere to be seen. The HDR is really apparent early on, such as bright lights reflecting off of walls with vivid pop, as well as deeper blacks that really handle the gauzy haze with precision. Honestly, the jump here between 1080p and 2160p is surprisingly large, especially if you know what to look for.

The Blu-ray and the 4K UHD disc sport the same Dolby Atmos track and nothing else (something that surprised me as there are no foreign language tracks on either disc), which is just shy of being reference. I say just shy because the nature of the track really limits it from being overly amazing, simply due to the fact that it’s a fairly quiet and dialog heavy mix. The film’s Atmos mix relies heavily on the score to elicit those little nuances and surround activity that the film needs to be great. However, despite the heavy focus on dialog, there are quite a few scenes that feature some exuberant use of the LFE and surround channels, such as the end shoot out, or the fight in the underground weed robbery. The overheads don’t get a wild amount of play (there’s a few sounds that float overhead), the light airy nature of the track really makes it a treat to listen to. The hubbub of London floats around in the background, as does machine gun fire splattering off of the rear end of the room, or the soft and lilting score that permeates the entire experience. It may not be a PERFECT track, but the Dolby Atmos mix is certainly just on the cusp of it.

Guy Ritchie is a man of many talents, but The Gentlemen puts him back into the comfortable position of being his home style. That of a British Gangster film with copious twists and turns, and stunning ensemble performances. It’s a bit more polished and smoother than the likes of Rock n’ Roll, Snatch and Revolver, but still having that gritty, cheeky humor that endeared him to so many people around the turn of the century. The 4K UHD is utterly fantastic, with great video and audio, but sadly some meager extras. Definitely worth checking out, especially if you’re a fan of Ritchie’s earlier works.