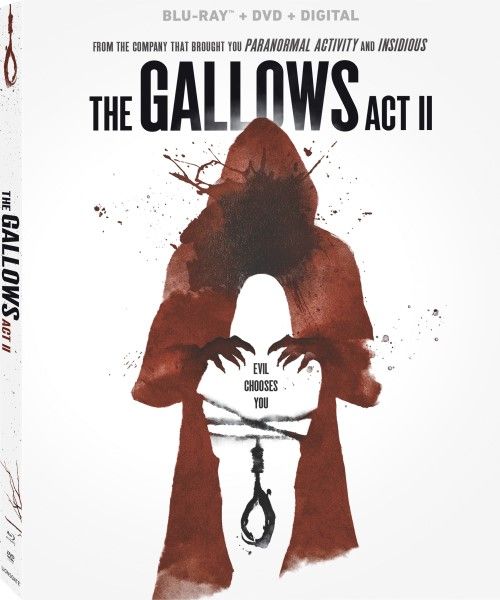 Movie
The Gallows was an abysmal horror found footage flick back in 2015 that I really wanted wiped from my brain. I mean, this was a movie that I watched once, and then immediately forgot as much as I possibly could, so that by the time when Lionsgate announced the sequel to the Warner Brothers original (I guess the rights changed hands for the sequel) I had completely forgotten that The Gallows existed. Being that I was having a really hard time remembering what went on I refreshed my memory on the subject…..and subsequently wished that I hadn’t. I honestly was worried that the low budget horror sequel was going to be even more low budget, and even worse, but I was kind of caught by surprise. Not surprised as in “wow, this is actually really good!”, but surprised by the fact that the movie didn’t actually end up worse, with a crummier cast and worst acting. The sequel improves upon the original found footage style of the first movie and actually TRIES to give it a plot. The only thing is, the same sloppy acting, the same hilariously bad plot line and just as much ineptitude went into the production of The Gallows Act II, that it also ends up being no better than the 2015 original.

After the hilariously bad “ghost” tale that unfolded in The Gallows, we move on to another person in the same small town (at least it seems that way with certain coincidences). Young Auna Rue (Ema Horvath) is moving to a new high school, where she can spread her wings and fly, in more ways than one. Auna is an aspiring actress, but the only acting thing going for her right now is her meager YouTube channel of 199 followers. Still, she’s trying her best and subsequently finds an opportunity when someone shows her a video about teenagers reading an old play called “The Gallows” which is garnering over a million hits. Desperate to try and boost her brand image, Auna reads the play aloud to her own readers, and low and behold, spooky stuff happens.

Suddenly she’s catapulted to the top of the world as she’s getting hundreds of thousands of hits on her videos, and even her acting professor is shocked at how good her monologue for the school play is (she’s using one of the excerpts from “The Gallows”). That is, until the seemingly harmless prank video turns out to be so much more. Now she’s being haunted by the ghost of “The Gallows”, and every turn lands her deeper and deeper into the ritualistic “challenges” that have been floating around online regarding the play, and before you know it, Auna is literally at the end of her rope.

The Gallows Act II is in NO WAY better than the horrible 2015 The Gallows. BUUUUUUUUUUUT, it does improve upon a few minor things. Instead of being so much found footage, the sequel is more of a traditional multi camera production with some found footage elements woven into the story structure. I also like that they tried to expand the scope of the film, giving more credence to Charlie’s followers rather than the ghostly hangman himself being the ultimate villain. It’s more engaging in some ways, but also makes the movie completely different from the way the first movie was, and doesn’t really feel like it’s a sequel in anything but name only at the end of the day.

Shot using RED Epic Dragon digital cameras, The Gallows Act II is a very bleak and grim looking movie. There’s some outdoor shots of Auna and her school that look bright and natural looking, but the rest of the film survives in the dark, bathed in shadows, and given a very flat and gray looking color grading. The desaturated colors are grim and grungy, with some heavy banding showing up in background and splashes of digital noise. Fine details are generally good, with outdoor shots at the school looking better than scenes where we’re looking through a digital web cam. Overall it’s a good looking transfer, with some weird quirks in the filming process that doesn’t always lend itself towards eye candy.

The Gallows only really “special” feature was that it was actually a low budget movie with an Atmos track, back when there wasn’t a whole lot of Atmos tracks to enjoy 4 years ago (comparatively speaking). The Gallows Act II utilizes a much more utilitarian DTS-HD MA 5,1 mix, and while it’s not as souped up as its predecessor, the 5.1 experience still delivers a good sound stage. Dialog is crystal clear, with hushed whispers and shrieking screams coming through with pinpoint precision. Surrounds are active with lots of thumps and booms in the dark, and the whole movie is just bathed in this creepy sounding score. LFE is tight and punchy, adding lots of low end support, but never really shaking the rafters with earthquake levels. It’s a good track, doesn’t try to be anything more, but is technically very sound for the horror genre.

Do I recommend The Gallows Act II? My goodness, no. This was an awful film that was just about as awful as the movie that came before it. The Gallows was a stinker of a film in 2015, so I’m not sure why someone would green light a sequel and I’m certainly hoping (almost begging) that they don’t continue on with the franchise, as it’s about as tapped out as it will ever be. Lionsgate’s Blu-ray release is solid enough, with good video, good audio, but some meager extras. Still, just skip it and save yourself the torture of having to see the movie yourself.

Thank You for the warning Michael

Yeah, Thanks for the review. Will skip this one.