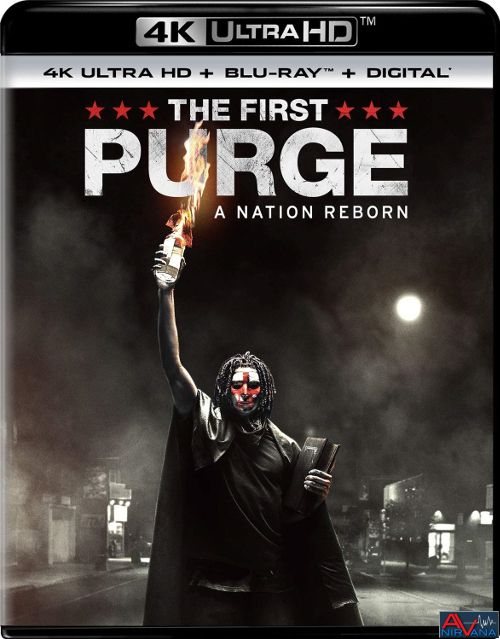 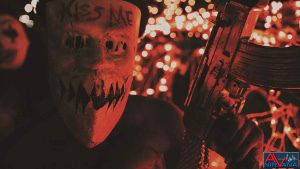 Movie
I’ve actually really liked the Purge series over the years. They’re sort of a guilty pleasure of mine and have been a fun sort of escapism for violent horror/thriller fans. The first was a brutal and dark home invasion story starring Ethan Hawk, but the series branched out after that into a sort of action/horror style that was ridiculous, but fun at the same time. Frank Grillo became a “main character”, so to speak, with the franchise and I rather enjoyed the blood, gore and Halloween style violence that made James DeMonaco’s series so deliciously fun. However, DeMonaco gave up the reins to the directors chair with The First Purge, handing over the job to Gerard McMurray, a mistake which reverberates through the film with depressing finalism.

The First Purge is kind of like how most prequels really are. They try to explain too much and get too far in over their head. Couple that with the fact that series found James DeMonaco has given up the directors chair (even though he’s still writing), the prequel fizzles out without much of anything to give it a sendoff. For those not in the “know”, the Purge franchise is set in a not so distant dystopian American future where one night of the year is set aside for the citizens to “purge” their anger and violence in one night of unlimited crime and violence. The normal people huddle and try to protect themselves while the more violent aspects of humanity is “purged” with unlimited freedom to commit whatever crime you want. It’s a silly idea at heart, but it works for creating a terrifying environment for our heroes to try and survive.

The first movie was a home invasion thriller with some SERIOUSLY brutal underpinnings, but the second and third film went more action/horror with elements of socio-political satire thrown in. The world of the purge was opened up further with satire on evil politicians trying to set up horrors to satiate their evil delights in the last film, but The First Purge does something that a good horror/slasher film should never do. It gets so serious that it loses sight of the ridiculous nature of the premise, and tries to be super relevant with modern society. 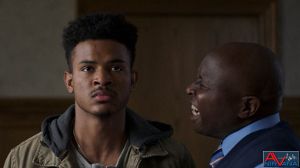 Like the prequel Star Wars trilogy, The First Purge is a largely unnecessary event, with director Gerard McMurray painting huge brush strokes that border on being parody, even though his intention is to act as serious social commentary. The film’s natural blood lust, terror ,and sickening amounts of gore are limited in scope, with maybe 10 minutes of the 98 minute film dedicated to the actual horrors of the night. The rest of the time is spent with the main cast pontificating how the evil gubbermint is trying to get the lower class down by purging them on this night (disguised as the “people” needing a chance to purge their violent tendencies). This is complete with a paramilitary squad leader who looks like he’s straight out of Hitler’s gestapo, and little quips about how the NRA is sponsoring the event etc.

Long story short, The First Purge is simply boring. It’s not nearly as inventive and terrifying as the first movie, and lacks the satire and gore of the sequels. Instead it’s way too preachy, with not enough gore and action, and WAY too much political pandering for it’s own good. The First Purge falls into the trap of believing that it is serious social commentary, instead of just having fun with the concept and giving horror fans what they want. Instead it just fizzles out with a hole hour of socio-political pontificating and not enough action. Characters are paper thin, with “power to the people” vibes, but not enough connection to make you actually care about a single one of them. Even Marissa Tomei delivers her lines like she’s William Shatner on a bad meth heroin binge, blankly delivering lines and hoping that the director calls cut before she embarrasses herself anymore.

Rated R for strong disturbing violence throughout, pervasive language, some sexuality and drug use 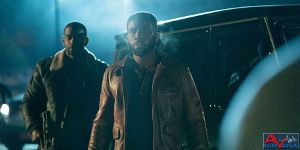 The First Purge is supposedly shot digitally and then finished with a 2K master, but the 4K UHD disc really is a solid improvement over the impressive Blu-ray. The Blu-ray was a bit hazy and desaturated, but the 4K UHD really does show that you don’t have to have a 4K transfer to show drastic improvements over the 1080p disc. The details are simply astounding here, with close ups and backdrops alike looking crystal clear and razor sharp. The dim film is surrounded in darkness, with splashes of bright red CGI blood and a few multi colored jackets acting as the only major coloring in the film. The rest of the film is grim and dreary looking, but still filled with deep inky blacks and good shadow detail. The HDR creates some very impressive black levels, going deeper and inkier than I expected considering the Blu-ray wasn’t 100% perfect. Banding and milky looking blacks are gone, with deep shadows and silky dark levels being the prominent feature.

If anything, the DTS:X track is the best part of the whole package, delivering a drop dead perfect audio mix that really compliments the crazy nature of the film. Vocals are crisp and clan, and the dynamic range impressive. Quite moments are punctuated by the intense score and heavy sound of automatic weapons, while the surrounds act as the major stand out of the film. They give the film a claustrophobic feeling, encompassing the movie with a sense of dread and oppression that weigh heavily as the terrifying scenarios unfold. Gunshots ring out with power and authority, while quiet whispers shift around the object oriented sound stage and sneak up on the listener from the sides. It’s a very aggressive, yet solidly nuanced track and one of the better next gen mixes that I’ve heard in the last few months.

I didn’t go into The First Purge wanting to dislike it. I have enjoyed the previous three films by James DeMonaco for what they were, and gave them a solid 3.5/5 to 4/5 (for the first one) every time I’ve reviewed them. The First Purge broke that tradition as Jame DeMonaco handed the reins off to a director who really didn’t have the sense of gleeful B-level lfun that DeMonaco infused with the previous three movies. The First Purge is banal, bland, and honestly just an unnecessary attempt at trying to go backwards instead of just going forward with the satirical series. The gore is near non-existent (and highly CGI’d) and the characters much less intriguing than it’s predecessors. The one thing that really frustrates me about a horror film is when it’s BORING, as I can handle good, and I can handle bad. But boring is the nail in the coffin for a series such as this. While the audio and video were top notch, I still have to recommend this as a rental only.

Thank you for the review. I really liked the first two but started to lose interest after I saw the third one. I will rent this one the question is when.

Asere said:
Thank you for the review. I really liked the first two but started to lose interest after I saw the third one. I will rent this one the question is when.
Click to expand...

yeah, the third one was pretty solid, but you could tell they were running out of steam. The shift to the new director was a mistake, as he doesn't have the same level of tension or terror that DeMonaco put in the first three (the first one was awesomely different thought)

I think this is a skip for me. The first one was CRAZY... started to lose me after that. It's looking like they've pushed the franchise a little too far. ;-)

the Purge films have always been cheesy, and the two sequels added a bunch of satirical politics in with the horror, but there was sooooo much gore that you could ignore it while you hacked and slashed your way through the film. Sadly The first purge lets almost all the gore go, leaving us with nothing but the politics and a few creepy outfits. As a gore hound and fan of the brutal nature of the first 3 it was HUGELY disappointing in that respect. Asere will know exactly how that would suck the fun out of the franchise. I personally think Gerard McMurray just didn't grasp how to do a gory horror film that well and focused on the backstory more than what made the series fun

huh... yeah, pulling the gore away definitely detaches the flick from the rest of the franchise.