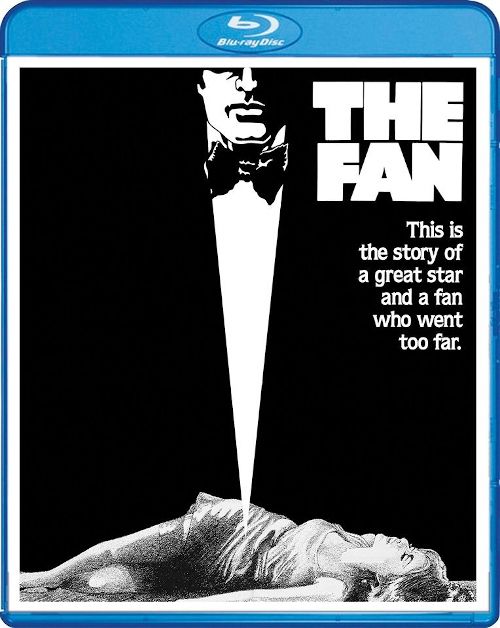 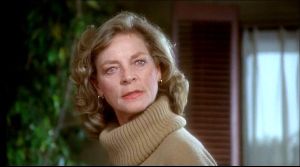 Movie
The Fan (at least according to several interviews and features) was supposed to be a much more subdued affair before the director change to Ed Bianchi. It was originally supposed to be a heady, introspective piece that warned against the dangers of stalkers and their impact on someone, but due to the rapidly changing horror/thriller environment of the 1980s, the powers that be decided to make it something more lurid, with blatant violence, and a Brian De Palma mental gymnastics game of cat and mouse. The end result is a film that is sort of at conflict with each other, as good portions of the movie falls into that quieter and more cerebral genre, while rebounding back to the more typically garish psychedelic horror with Michael Biehn going crazy on screen.

Meet Douglass Breen (Michael Biehn) and Sally Ross (Lauren Bacall). Both are at the opposite end of the social spectrum, but are inextricably tied together due to a little thing called neurosis. Sally Ross is an aging actress struggling to make it in a young woman’s world, while Douglass is her adoring fan, writing her fan mail day in and day out. Sadly he’s not just a normal fan. Instead Douglass has sort of lost touch with reality, and created a fantasy world where Sally is completely in love with him and only trapped in her ivory castle due to the people around her. Writing letter after lefter after letter, Douglass finally snaps when Sally’s secretary blows him off a bit too harshly, causing his poor mind to lose control completely and engages on a plan to make her his. 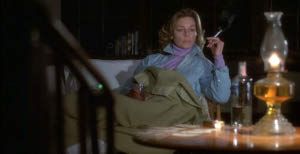 Simultaneously, Sally is living in that proverbial ivory tower, completely oblivious to how dangerous and deranged Douglass is. She’s dealing with her own narcissistic issues right now, trying to break out into a stage production, deal with her ex-husband Jake Berman (James Garner) marrying a woman half her age, AND telling her secretary to just “deal” with Douglass. From her point of view it’s just stuff that the regular people deal with, and it’s not until Douglass is LITERALLY knocking at her door with a knife does she wake up and realize the danger she’s in.

The Fan is a big cumbersome and awkward for a 95 minute movie, mainly due to the fact that it seems to be conflicting with another film that’s under the surface. A film that it was originally intended to be. The movie works best when it’s at it’s cerebral level, watching Michael Biehn leer around the place and slowly start losing his cool. The baby faced 25 year old is absolutely magnificent as the creepy stalker, and his portrayal of Douglass is exceptionally disturbing. However, it’s when it veers over into the violent slasher territory that things start to fall apart. The scenes of violence are just filmed rather haphazardly, with the director of photography obviously having NO clue on how to actually harm someone. There’s a scene in the subway where Douglass kind of slaps a woman’s face with a straight razor, making it look more like he’s caressing her or pawing her rather than trying to CUT her. Another happens on a rooftop where he slashes at a guy’s chest with it, and the guy keels over from a glancing blow. The whole violence level feels cringey and kind of awkward, as if those involved in producing it didn’t have a great handle on how to do action or gore. 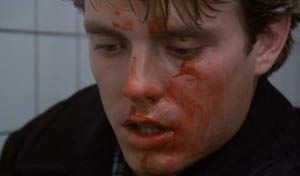 I can’t see any claims of a new scan for The Fan, so I’m guessing that Scream Factory used an already existing (and older) master for the film. The Fan’s 1.85:1 framed AVC encode is quite good, with a cool look to New York City, but with splashes of Broadway level colors bleeding through. Skin tones are a bit pale and lack that pink cadence that is considered natural, but indoor shots are warm and inviting, and the blacks look more than capable. There’s some intermittent grain spikes that come and go, but for the most part the only real artifact to deal with is some banding. Fine details are solid enough, with some mild softness in close up and optics heavy shots, but overall clarity is robust and revealing. It’s a solid looking transfer for an older catalog title, and one that seems to have had very little (if any) digital tinkering done to it. 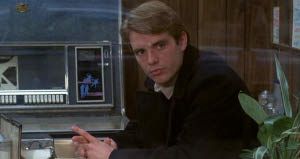 The 2.0 DTS-HD MA mix is more than capable at delivering within it’s limitations, and is actually quite impressive. The 1980s track is clean and clear of any major distortions or auditory artifacting, as well as reasonably spacious in the front of the room. The score provides the largest aspect of the mix, while the dialog is cleanly replicated up in the front of the room and evenly balanced with the rest of the mix. It’s simple, precise, rather undemanding, but technically well done on every front. There’s not a whole lot more that could be gleaned from a 2.0 mix, and Scream’s presentation is more than pleasing to the purists. 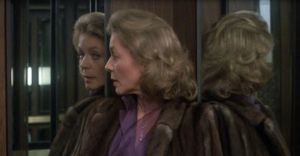 The Fan is an uneven venture that thrives on both ends of the spectrum. On one hand it tries to be a tense and taught thriller, rife with all of the tropes that go along with that, and the other is the creation of a Broadway musical within the main story arc. It’s a strange mix, and one that director Ed Bianchi obviously has a hard time balancing throughout the film. Maybe it was because Laruen Bacall truly thrives on the stage, so this was included to make her more amenable to work with, but it DOES have a distinct downward pull when compared to the thriller aspect of the film. Still, it’s a tightly acted film that does well with the actors involved, and is unique entry among the early 80s horror/thrillers of the day.