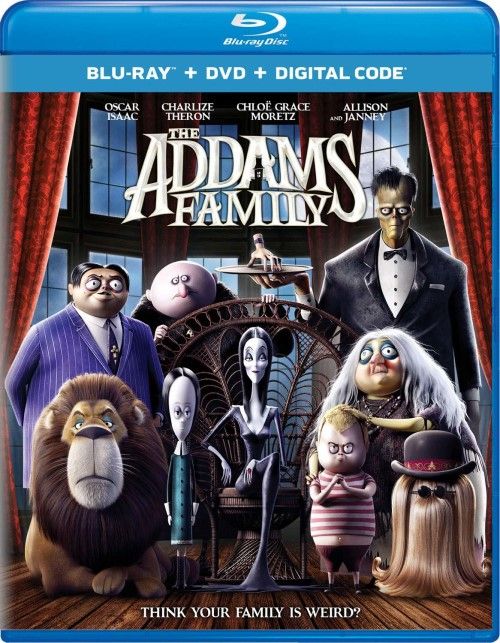 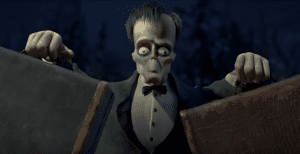 Movie
After The Addams Family and Addams Family Values getting released on Blu-ray a few months back I’ve been prepping for this live action adaptation of the classic comics and live action TV Show that made them so popular to American audiences to being with. I will admit, I was expecting to really loathe the new animated film as the trailer just looked like it lacked all of the charm and wit that made the 90s movies so insanely fun. Raul Julia and Christopher Lloyd added so much charisma and intensity to the movie adaptations, that it’s really hard viewing anyone else in those roles. However, I ended up being rather charmed with with the new animated film from Universal, and even though it’s not going to be a masterpiece, it hit all of the right tonal notes and created a thoroughly enjoyable animated romp.


The film toys with all of the classic themes of acceptance and tolerance that the TV show and comics introduced decades ago, shooting us back in time to when Gomez (Oscar Isaacs) and Morticia (Charlize Theron) tie the knot, only to be driven out of their home by humans decrying them as “monsters”. Heading out on their own they go to the only place that they can think of that is so revolting, so disgusting, so horrible to live that no one else would ever bother them again…….New Jersey (I’m sorry, I got a hilarious giggle from that little gag). There they raise their children Pugsley (Finn Wolfhard) and Wednesday (Chloe Grace Moretz) in hopes of sheltering them from the outside world. But as we all know, you can only shelter a child for so long until they begin to exercise their natural curiosity.


Wednesday Addams starts to become curious about what lies outside the gates of their haunted house and when a brand new town is being created just down the hill from them, it creates the perfect opportunity for the young girl to head out into the new world and see what other horrors out there await here. Simultaneously Pugsley is training for his Mazurka, a sword based performance that will solidify him as an official Addams family member, only to be failing miserably due to his own unique quirks of being an Addams. However, their curiosity and “humanity” is tested when the creator of the little town, a reality TV show host named Margaux (Allison Janney) decides that it’s time to get rid of the freaky Addams Family members before they ruin the resale value of the homes she’s trying to shuffle off on the “normies”. 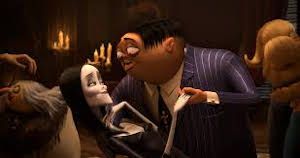 The Addams Family is a fun little animated reboot of the series and hits home with all of the major themes that the TV show and earlier comics delved into. Mainly the themes of being yourself when everyone is trying to conform, tolerance of people different than yourself, and general macabre fun. All of the actors really have a blast voicing their respective roles, with Charlize and Chloe really taking the cake. I will say that Oscar Isaacs is phenomenal as Gomex, but NO ONE, and I repeat, NO ONE can take the place of Raul Julia! Chloe’s Wednesday Addams is perfectly timed, with just the right amount of angst and depressive humor, while Charlize oozes charm and grace as the sultry Morticia.

The movie does feel a bit kiddy at times, but really, even the TV show was aimed at the younger generation and families in general instead of being dark and adult like. I would have loved to have seen the Addams Family come back in flesh and blood, but Universal’s animated film actually surprised me quite a bit with it’s charm and sense of fun. The movie’s themes are fairly generic and doesn’t really delve too deep, but it’s perfectly acceptable cotton candy fluff that works with the other aesthetics of the haunted mansion style of animation.

Rated PG for macabre and suggestive humor, and some action. 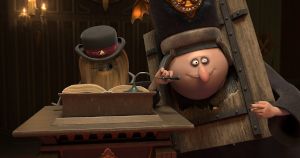 The 1.85:1 framed AVC encode is spectacular in 1080p, and even though there is some sporadic banding and some noisy edges, the overall presentation is excellence. The textural details are fantastic, with the haunted house showing off tons of little nuances and crevices that make the whole visual stage just wonderfully detailed. Faces and other items, like clothing, come through perfectly, but the drab coloring and state of the haunted house sometimes makes the image look a bit soft. Down the hill in the new town things get ridiculously spicy in the color department, with garish splashes of pinks, blues and other primary colors at every turn (a stark contrast to the grim, macabre, look of the Addams household). Shadow details are excellent across the board, and the darkness is only sporadically plagued by the above mentioned banding. 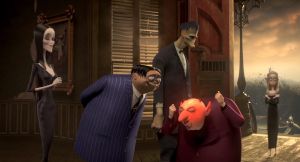 The 7.1 DTS-HD MA track is just as superb as the video score is, giving us a wonderful sonic experience to enjoy. The dialog in the opening scene made me boost up the track by a good 3 DB’s as it was excessively soft, but once that opening scene plays out the track balances much more nicely. Dialog is clean and clear, and the surrounds get tons of activity from the creaking mansion, or the organ music score that permeates the sound stage. The little nuances are what counts, such as the cracking of Ichabod’s branches, the chirping of beetles making a bridge, or the powerful roar of the house’s “get ouuuuuuuuuuut!!!”. Explosions rock the sound stage quite well with the low end, and even some of the creaks and groans of the mansion itself extend very low and deep. A great sounding track overall.

• Deleted and Extended Scenes
• Welcome to the Family – In this combined Making of/Character Profiles, we hear from the filmmakers and stars of The Addams Family about how the film came about, the animation process and insight into the characters.
• Life of a Scene – From black & white storyboards and layouts to animation and lighting, follow along with filmmakers as they bring to life a scene from the movie.
• Charades with Thing – There's nothing quite like a game of Charades with your friends. But what happens when the person giving the clues isn't exactly a person? What if he's just… a hand? On talent day, stars of the film are invited to play Charades with Thing. Talent goes head-to-head, competing to see who can guess Thing's clues. Graphics reveal the answers and keep score for each player.
• Addams Family Throwback
• "Haunted Heart" Lyric Video – performed by Christina Aguilera
• "My Family" Lyric Video – performed by Migos, Karol G, Rock Mafia & Snoop Dogg

The Addams Family did surprise me a bit, and I’m glad it did. I’m always happy to eat crow and change my tune on something for the positive if I possibly can, and after the silly trailer that Universal released months ago I was fully expecting the worst. Needless to say the movie is charming, fun, and light enough to be enjoyed by the whole family (there’s definitely a few winking and nodding adult jokes that slide through as well). The Blu-ray is magnificent in it’s technical specs, and the disc even holds a moderate amount of extras as well. Definitely worth a watch in my humble opinion.