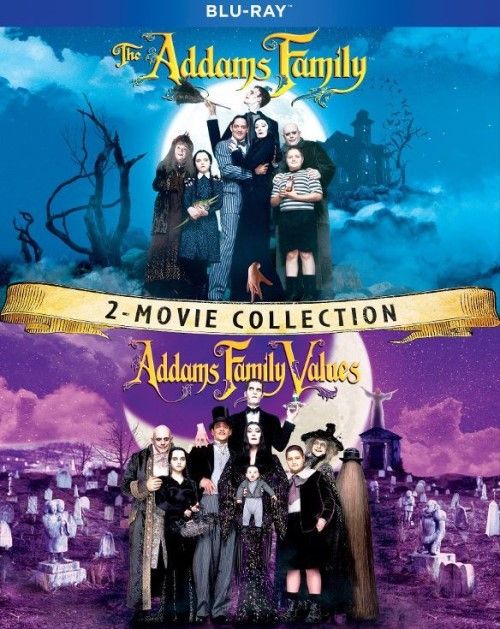 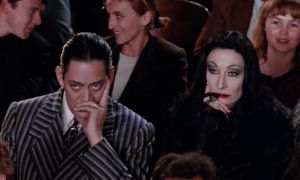 Movie
Addams Family fans have been waiting around for YEARS for the series to hit Blu-ray, and despite Paramount teasing us with the original film back in 2014 (and the 2017 repressing), we’ve had to make do without the sequel for the majority of Blu-ray’s life. Luckily with the new animated film coming to theaters this October, it’s the perfect time to drop the sequel, and Paramount has done just that, both in the form of the 2 pack for those who haven’t bought the original yet, and a stand alone release for those who have the original and just want to complete the collection.

Comics to film adaptations are pretty much commonplace in today’s age, but back in the 1990s it was much less commonplace. Especially when you consider the comic at hand was first started back in 1938, and has become a cult classic to people everywhere. Charles Addam’s “Addams Family” was a wonderfully revered bit of newspaper comic art, but no one ever realized it would be as bit of a hit as it was on cinema some 60 years later. When Addams died in 1988 the only thing that he saw of his creation was the hit television show that ran during the 60s, but ironically the only reason the movie came to fruition was because of the catchy theme song that was still popular at the time. The powers that be decided that it was time for a revamping, having procured the classic stage actor Raul Julia and Anjelica Huston for the lead roles, and thus we get the film here before us, as the rest is history.

The film revolves around the kooky and bizarre “Addams Family”, who live life to the beat of their own drum. Dressed in all black and living in a Gothic mansion, Gomez (Raul Julia) and Morticia (Anjelica Huston) Addams are seen as outcasts by the rest of society. Their daughter Wednesday (Christina Ricci) is reviled at school for her deadpan personality, but the family is happiest just being themselves. Their little routine lives are upended when Raul’s long lost brother Fester (Christopher Lloyd) comes to town and inserts himself into their lives. While Raul is ecstatic to have his brother back after all these decades, The rest of the family is not so sure about Fester and his intentions. There seems to be more than meets the eye and none of them want to see Raul taken advantage of.

The Addams Family was actually director Barry Sonnenfeld’s first feature film (before he would go on to direct the Men in Black series as well Get Shorty and many others), and along with the writers of Beetlejuice and Edward Scissorhands (you can see where the visual style came from) was faced with the difficult task of crafting something that paid homage to the funny papers of Charles Addams, as well as the TV show, but still making something completely their own. In that respect I think they succeeded magnificently, mostly due to the antics of Raul Julia and Anjelica Huston. They both just steel the show in every way, with Raul Julia hamming it up nearly as much as he does for the role of M. Bison in the Van Damme Street Fighter movie. Christina Ricci as young Wednesday Addams is a close tie for second though, rivaling Huston’s deadpan portrayal of Morticia. 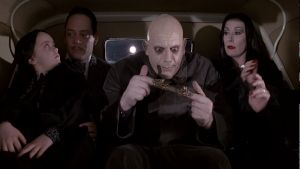 There’s a lot of contention among fans about which Addams Family movie is actually better. The original, or the sequel. Myself personally, I’m still in the old camp of the original did it better, but Addams Family Values is right behind it on my personal Mike-O-Meter scale of fun. It’s been a few years since Uncle Fester made his way back into the Addams family’s life, and he’s integrated well. Now Gomez and Morticia have decided to have another child, which is seen as a blessing by his parents, but an annoying little obstacle for murder for Wednesday (Christina Ricci) and Pugsley (Jimmy Workman).

Well, poor Uncle Fester (Christopher Lloyd) is now the target of the some mischief this time, instead of BEING the mischief like last film. Morticia and Gomez end up hiring a nanny (Joan Cusack), who’s more than meets the eye. While the Addams family may drolly talk about killing and death, the nanny is actually a serial killer who’s intent on marrying Uncle Fester, and then naturally killing him off and taking his inheritance for herself. The kids pick up on her nastiness quick enough, but she has them shipped off to summer camp so that they can’t interfere, leaving the Addams kids in a serious pickle. Having to fit in with normal kids, and also get back home to foil Nanny Debbie’s plans.

In some ways the sequel is a little bit better than the original. The script is a little bit tighter (which could be attributed to less rewrites and less turmoil during the production), but it’s also a bit tamer in other ways. The shock value of the kooky family is gone, and they’re having to resort to more insane antics during summer camp to get the laughs up there. However, the main story line with Joan Cusack (who plays a fantastic addition to the crew, as she does zany and crazy so VERY well) is much more polished and well done than the skullduggery with Uncle Fester in the original. So it’s a case of give and take here.

Everyone is back for the sequel and just as quirky as ever, although Gomez had to sort of take things easy as his health was suffering pretty drastically in 1993 (although not as drastically as he was reported to be in when he made Street Fighter the next year), and as such his over the top character was not nearly AS over the top. Honestly, I like both films nearly the same, but I still have to give the edge to the original simply due to how fresh it was and how fantastically Gomez and Morticia worked together. All in all, the sequel is a great followup hit and fans have argued the merits of each film over the other for years without much confirmation of which is the better film. 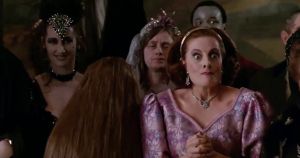 Sadly this is still the same tired older master that was used for the 2014 (and subsequently 2017 repressing), and still suffers from all of the same issues. These issues mainly stem from the fact that it is….well...an OLD master. There’s not a whole lot of digital tinkering that went on with the release, but there is plenty of print damage, colors being a bit blander than expected, and murky looking blacks. However, there’s still adequate detail for a solid enough picture. I was hoping for a new remaster of the film, or at least a better looking encode from modern techniques, but for those of you who saw the original Blu-ray, then you know exactly what I’m talking about.

Much like The Addams Family, Addams Family Values comes to Blu-ray with an aged master. This appears to be the same master that’s been available for the Itunes and other streaming services for well over 12 years, complete with interlacing and print damage galore. That’s not to say that it’s a horrible master, as there’s just enough quality improvements to see the benefits of HD, but it IS definitely aged badly and is in serious need of some touch up work and given a new healthy recode. Blacks are generally good, but do suffer from some crushing here and there, and the fine details is moderately better than the old DVD. Again, not a BAAAD transfer, but definitely one in rather peaked condition. 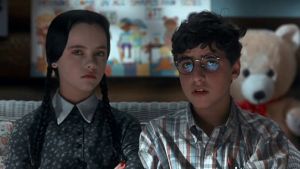 The Addams Family was recorded in Stereo Surround for the theatrical one, then remastered for a full 5.1 mix for the 1999 DVD, and that particular mix is the same one that we have here, just in DTS-HD MA lossless encoding. Being that the 5.1 mix is just an unfolding of the stereo surround mix into 5.1 form with some added LFE, it’s not going to be a rip roaring mix, but it is rather well done with a light and airy feeling to it. The more diabolical traps and machinations of the Addams mansion come through with force and heavy clarity, while the dialog is still the main center of attention. Ambient creaks and groans of the mansion come through in the surrounds, and overall makes for an engaging track.

The 5.1 DTS-HD MA track for Addams Family Values is more than adequate for the job, being a rather front heavy mix that relies on mild ambiance to fill out the back several channels. The LFE gets to come out and play with a few comedic set pieces, but otherwise this is really a 3.0 mix with some mild bumps and surround usage. Dialog is crisp and clean, the mains get to play with the spookiness of the manor as well as the yelling kids during summer camp, and I could detect no signs of any major distortion to be dissatisfied with. 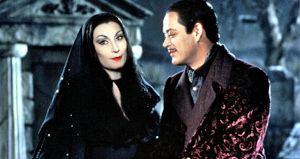 It’s been a long time coming, but we finally have BOTH of the Addams Family movies on Blu-ray. If you have the first one already I would be hard pressed to buy the double pack simply because it’s the same old disc we’ve had for years (unless of course you could sell the original for a decent price). But luckily Paramount didn’t pull a Warner move and only release the sequel in the double pack. Both films are given separate releases as well, giving you the option to pick up Addams Family Values on its own to complete the duo. There’s some mild frustration with the weak picture quality, but it’s one of those situations that I just don’t see Paramount pulling out the stops for many years to remaster it, so it’s the best we have available. Fun Watch for Sure

Thanks for the review. I am a fan of the original since I watched it as a kid. Will check it out.

Release is obviously timed with the pending reveal of the new film?

Todd Anderson said:
Release is obviously timed with the pending reveal of the new film?