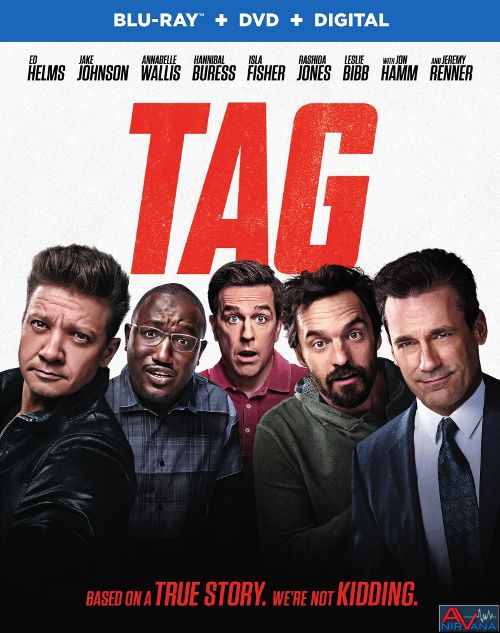 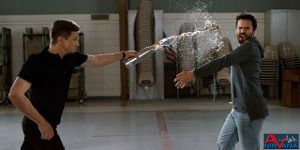 Movie
The term “based on a true story” means little in Hollywood. Usually when a film has that moniker attached to it the names and generic IDEAS of the movie are similar to the true story, but 99.999% of the material is all Hollywood fluff used to generate a movie idea. It should be pretty obvious, but Tag is one of those movies. The original story was a newspaper article about a group of friends who played a surprise game of tag every year till they were old men. Warner Brothers has grabbed the concept of friendly camaraderie and amped it up to level 11 and just RUN with the concept. While I won’t say that Tag is a comedy classic, or that it sticks 100% to the true story facts, but it is a highly entertaining film that actually surprised me with how sweet and heart warming it could be, all the while wrapping itself up in the insanity and craziness of an R-rated comedy flick.

The film revolves around 5 childhood friends. Hogan “Hoagy”, Malloy (Ed Helms), Bob Callahan (Jon Hamm), Randy “Chili” Cilliano (Jake Johnson), Kevin Sable (Hannibal Burless) and Jerry Pierce (Jeremy Renner), who have been playing the same game of tag for 30 years (since they were 9 years old). Every May it’s “game on”, with the 5 friends conniving, backstabbing, and generally throwing each other under the bus to play a month long game of tag, just for the sheer joy of it. After 30 years, Jerry has never ONCE been tagged, leaving the other four in the group with the insatiable desire to make their elusive friend “it” for once. After Hoagy announces that Jerry is finally retiring after this year, being that he’s getting married and moving, the gang decides that it’s time to team up and make it their month long mission to make sure that Jerry is finally “it” for once.

The thing is, it’s not going to be as easy as it sounds. Jerry is a veritable Hawkeye without the bow, and his physical skills make him a cagey target. To make matters worse, with his wedding happening in the same month, his beautiful bride to be Susan (Leslie Bibb) wants the wedding to be off limits, cutting their window of opportunity down to a few mere days before their time with Jerry runs out. As the team gets closer and closer to Jerry, it becomes obvious to all involved that their elusive friend is not going to be caught using normal methods. Which means its time to bring out the big guns.

Even though it’s a “dumb” comedy, Tag ended up being one of my favorite mindless comedies of the year, besting the already fun Game Night in many ways. The film works on several levels, allowing the ensemble cast of comedians to really have fun with the concept of a group of grown men playing tag, while at the same time intertwining an ending act twist that brings it together as a heartfelt friendship drama as well. The film has plenty of idiotic moments, but those moments are actually with make this film that funny, with the elusive Jerry running, dodging, jumping and diving to get away, while all his friends basically tear down half the town in order to get him. It’s goofy, silly, but completely fun to the core, and not TOO heavy on the R-rated raunchiness either.

While the concept itself lends itself to inane stunts (many of which are absolutely hilarious, especially Jeremy Renner’s internal Sherlock Holmes monologues), the film flows effortlessly due to a cast of characters that are just having FUN with their roles. Standouts would be Ed Helm as the frustrated Hoagy trying to tag his buddy before their last game is over, and Jon Hamm being Jon Hamm. Smooth, clean shaven, and cocky as ever. Jeremy Renner was the one weak spot in the comedic lineup (at least that’s what I thought), but he ended up being the highlight of the show, playing off his character as slightly dark, slightly goofy, and completely in control of their little game. I was honestly expecting him to drag the comedic timing down, but he worked really well as Jerry. The rest of the cast adds their own flavor to round things out (Jake Johnson is doing his normal “stoner” schtick), and Isla Fischer playing the loose cannon style character, much like how she played herself in Wedding Crashers.

Rated R for language throughout, crude sexual content, drug use and brief nudity

Like most Warner Brothers comedies, Tag is bright and shiny, with lots and lots of colors and a warm color grading to the film (as well as the lighting). Fine details are usually exemplary, showing off every fiber of Jerry’s hoodie, or the little bits of dirt and grime that Chili gets in his face when getting slammed off the log. Blacks are deep and inky, while primaries pop off the screen with a goodly amount of sharpness. The warm and homey look to the lighting sometimes lends itself to a few soft shots, but not enough to where it truly detracts from the overall picture. Overall, a great looking digital shoot.

The 5.1 DTS-HD MA track is one of the better comedy mixes that I’ve heard in quite some time. It’s a bit front heavy for the dialog centric scenes (and there are a lot of them), but he sheer lunacy of the game of tag lends itself towards a lot more action than most would expect. Not to mention that the dynamic range is simply HUGE, with quiet vocal driven moments interrupted by thunderous bass and some heavy hitting music numbers (the Ozzy bit in the woods was amazing on a sonic level). Surrounds are active with the sounds of running, jumping, climbing and crashing throughout, and none of that takes away from the quieter moments. Tag really does enjoy a superb audio mix, and even though it’s “only” 5.1 lossless, it is a good example of just how good a “paltry” 5.1 mix can sound.

While not a comedy classic by any means, Tag is a hilariously fun movie that was way more enjoyable than I initially expected. It’s sweet, charming, and totally insane, but the film was a blast to watch with a group of friends. The humor is spot on, and the film does what so many comedy films fail to do so often. It actually nails the landing and sends the film out on a great note. Warner Brothers has once again done a wonderful job with the transfers, giving us a great audio and video pair, with some moderate extras to round out the package. I really did find the film to be a blast, and have to recommend it for a good watch as it was a highly enjoyable R-rated comedy from beginning to end.

Thanks for the review. Never heard of this movie but will check it out based on the review.

This one had somewhat sketchy reviews at its theatrical release. But, Mike, your stamp of approval will bring it into my home!