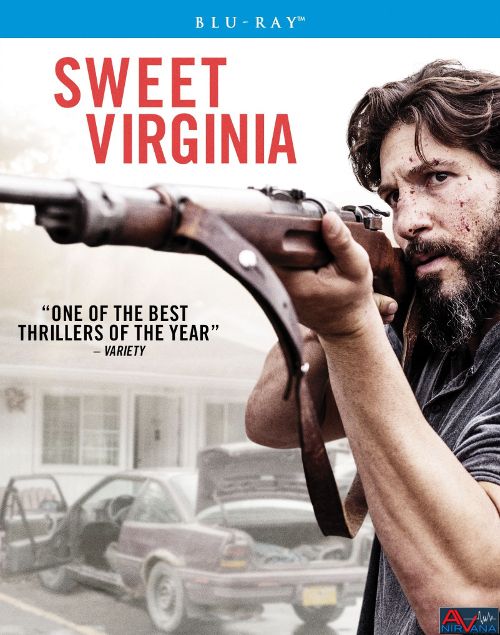 Movie
Neo Noir thrillers have been making a come back as of late, and it’s been an interesting ride. As a fan of the Coen Brother’s early works, I’ve been watching with interest as more and more directors are crafting films that emulate their work, almost as a tribute to their trailblazing. Three Billboards Outside Ebbing, Missouri seemed to copy the newer style of the brother writers/directors, while Sweet Virginia hearkens back to the REALLY early days of the duo. If I had to put a finger on a comparative film from their repertoire it would have to be Blood Simple. The movie is slow paced, methodical, but interspersed with small portions of violence that is grossly underplayed by the laid back tone of everything else going on around those instances. The film does have its fair share of drawbacks, but it is an entertaining slow burn thriller with an excellent casting choice by sophomore writers, Ben and Paul China (who labels themselves as “The China Brothers” in the credits. A bit similar to the people they seem to be emulating I might add).

We open up with three men in a diner discussing a business proposition, when in walks a lone man who slaughters the three of them without mercy (a man who’s only known as “Elwood”, and played by Christopher Abbott). Lo and behold this hitman was hired by one of the men’s wives (played by Imogen Poots) to off her husband. Only thing was, he took things a bit too far and killed the other two men in the diner to make it look more random. This leaves several grieving widows, not only including Lila (the one who hired Elwood), but Bernadette Barrett (Rosemarie Dewitt) as well. The grieving widow may not have been all THAT grieving, as she has been carrying on an affair with wounded rodeo rider, Sam Rossi (Jon Bernhall), who is just trying to make ends meet as a humble motel clerk (named Sweet Virginia, where the movie gains its name from).

Things go from bad to worse when it comes to light that Lila’s husband WASN’T the rich person she thought he was, and now she doesn’t have the money to pay Elwood for his hit job. Being that he can’t get blood from a turnip, Elwood turns to Bernadette, as her husband was known for his suspicions of banks, and squirreled all of his money away. As the nightmarish Elwood coolly continues his merciless mission of gaining his due compensation, the little Alaskan town is upended with bone crunching violence that sends ripples down the entire community.

Sweet Virginia is not your typical thriller. There’s the traditional inciting incident at the diner early on, but the movie doesn’t devolve into the traditional “lone hero makes it his mission for revenge” like so many others. I almost expected it to, as the trailer and the cover makes it seem like Jon Bernhall’s Sam is going to be the avenging angel throughout the film. Instead, we get to see how things unfold after the murder naturally. The community is naturally shocked, but it’s the character interactions that make this film worth watching, as you watch different people slowly being moved into position for the explosive final scene. Sam and Elwood are the main two to keep your eyes on, as the two are foils for the other. Sam is a man who grew up as the tough guy in his earlier days, but is now just looking for peace and quiet, while Elwood is a tightly wound psychopath, who barely has a control on his emotions (even though he doesn’t show it to most people). Watching the two men play off each other and work their way to the inevitable end that really is fascinating.

However, that cold psychotic nature of Elwood is also one of the film’s flaws. Christopher Abbott plays the hitman to a T, but it’s so cliched in so many ways that you can’t help but roll your eyes. It’s not that Elwood isn’t a convincing assassin with a tenuous grip on reality, but its that he plays the character so hammily that you kind of feel that he’s a caricature more than anything. The same thing goes for the odd relationship with Bernadette and Sam. Not that their relationship was badly done, it just seemed unnecessary for the story to have her be one of the widows. Nothing was really fully fleshed out with that “scandal” and just felt a little unnatural.

Rated R for violence, some strong sexuality, language, and drug use

I couldn’t find out ANY information on the style of camera’s used for making Sweet Virginia, and I honestly can’t be positive as to which way I would guess. All I know is that the film is given a very somber look with desaturated colors with a distinct blue and yellow color grading for the lenses. The desaturated look gives the film its bleak visual tone, with decent amounts of detail scattered across the 93 minute film. The opening shot looks the worst of the whole lot, with a sickly yellow hue and smeared blacks, but once we get out of the diner the clarity is boosted quite a bit. The facial hairs on Sam’s face is appropriately detailed, and the Alaskan backdrops are decently rendered. The blacks are still a bit murky, and the yellow and thick blue color gradings aren’t one for giving a whole lot of detail in those dimly lit shots. It’s a solid enough encode from Shout Factory, but IFC Film’s picture was not one that was designed to looks all shiny and clean.

Shout Factory provides us with the Obligatory 5.1 and 2.0 DTS-HD MA tracks, with my choice naturally going to the native 5.1 mix. The film is a laid back affair, and as such it is fully front heavy most of the time. Dialog is locked up there in the center channel, and the mains handle most of the activity, but there is still some good use of the surrounds and LFE channel. The crashes and bangs during the conflicts utilize the side channels with ambient noise, while the score adds much of the rumble and roar that one would expect from the lower frequencies. The one thing that stood out like a sore thumb (thanks to Hollywood and it’s obsession with bassy gunshots) is the fact that the guns shooting ACTUALLY sounded like guns. As someone who’s been around firearms his whole life I get a good chuckle at every little gun shot in blockbuster movies sounding like howitzer cannon. Most gunshots in real life sound more like a “pop” then this thunderous wall of bass. Which is exactly what the director Jamie Dagg utilized in this mix.

Sweet Virginia is a nice twist from sophomore writers Ben and Paul China, with a solidly directed effort from Jamie Dagg. The story is very laid back and methodical, once again reminding me more of Blood Simple from the Coen Brothers more than anything. There’s a few minor issues with the script, but overall this is a refreshing change of pace from all of the revenge thrillers out there. IFC films is usually one associates with modern horror films, but this is a nice change up that I honestly wasn’t expecting. Shout Factory’s Blu-ray is decently done for the most part, but sadly is a rather light on the extras. Still well worth checking out.

Thanks for the review. I will look for this one.

I enjoyed this one as well Mike. Nice job!