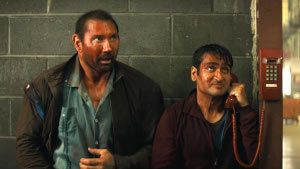 Movie
It’s kind of common knowledge that getting into an Uber (or Lyft, who’s discriminating) is a bit of an interesting experience. Being that these are just general people moonlighting as professional cabbies, you get a whole swatch of American sub culture that is just atypical of your usual cabby stereotypes. You can get the soccer mom chatting your ear off, an ex military vet looking make a few bucks on the side, or some guy who’s DEFINITELY been taking some illicit substances before turning on the engine and picking you up. This is kind of the case with Stuber, but in reverse, as one of the tag lines of the movie is that it’s the driver who’s in for a bit of a surprise this go around.

Stu (Kumail Nanjiani) is a downtrodden big box store worker who’s trying to make the best of his life. He’s in love with his friend Becca (Betty Gilpin) with which he is starting a small business with, his boss is a complete jerk, and he’s moonlighting as an Uber driver on the side to make a few extra bucks (which is where he gets the nick name Stuber from….Stu + Uber = Stuber, thanks to his jerkish boss). However, his day turns upside down when a police detective named Vic Manning (Dave Bautista) calls him for a pickup (only to subsequently kidnap and force him into a classic buddy cop type of movie).

Vic is on the tail of a criminal by the name of Oka Tedjo (Iko Uwais) who killed his partner Sara (Karen Gillan). The only thing is, he’s partially blind as he just had laser surgery on his eyes that morning, and they haven’t recovered just yet. So now Vic is forced to schlep around in an Uber with Stu, and utilize his car to take down Tedjo once and for all. 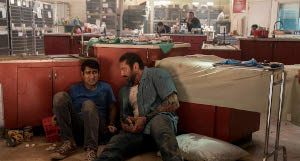 Stuber follows the traditional rules of a buddy cop type of movie. Vic is the loud mouthed cop who won’t say no for an answer, while Stu is the weak and mealy mouthed guy who needs to learn to speak up for himself. Vic is the stereotypical tough guy, complete with having a bad relationship with his daughter Nicole (Natalie Morales) and hides his emotions from everyone around him. As you probably could have guessed, the movie revolves not just around Vic and Stu trying to catch this criminal before he gets away, but with each of the two men coming to grips with their own problems and facing their demons head on.

The humor in Stuber is a bit hit or miss, which is a sad thing considering how much I like Kumail’s dry sense of humor. It really seemed like his and Bautista’s chemistry was never 100% spot on, meaning that the humor that Kumail is so known for didn’t work with Bautista’s growling super cop persona. However, the movie sometimes dives into super violent action, complete with people getting their brains blown out, double crosses and several executions. The action with Iko Uwais and Dave Bautista was probably the best part of the whole movie, as it was the least humor filled sections. The stunning martial artist and the WWE star do well together on screen as action foils, but it’s really the inclusion of so much humor that drags the action down, especially since Stu can’t keep his mouth shut.

Rated R for violence and language throughout, some sexual references and brief graphic nudity 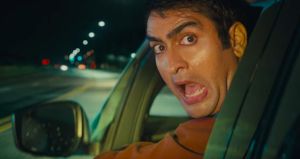 I was actually a little surprised at how much I enjoyed the upgraded 4K UHD disc for Stuber as I was. The Blu-ray is a good looking transfer, but the color grading and constant use of hot whites and dingey blacks made me wonder if the Arri Alexa shot film would show much upgrade considering that 2K resolution master was used for the release. The upgrades in fine textural detail and the deeply saturated pop of the colors really was pleasing to the eye, as are the most subtle upgrades such as the deeper black levels and that mild softness on background objects clearing up. Watch the stubble on Bautista’s face, as you can see the individual flecks of pepper grey in with the dark black, and the laugh lines are Kumai’s eyes. Blacks are deep and inky, showing off blood, splattered pet food, and every assortment of crazy situations the two get themselves in during the movie. The banding is near nonexistent, and only a couple times did I notice some obvious black crush. 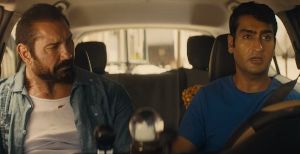 Much like Disney, 20th Century Fox keeps the 7.1 DTS-HD MA track on the Blu-ray, and gives the 4K UHD a slight upgrade with a full on Dolby Atmos track. Like they normally are, the Atmos track is not a HUGE upgrade over the 7.1 mix, but there are some definite differences. The overheads are engaged quite nicely with some of the more action oriented scenes, as well as utilizing some discrete effects near the end of the film. The track is bombastic and powerful, throbbing with low end energy and a high octane surround utilization. Gunfire reverberates throughout the room, as does the pulsating sound of music as the two go into the strip club. LFE is exciting and the dialog above reproach. If I had to say, the Atmos track just perfects the already great 7.1 mix, and makes it just a little more enjoyable at the end of the day.

Stuber looked a lot funnier in the trailer, and as an action movie it’s rather lacking in many ways. Kumail and Bautista make for an amiable enough duo, but their chemistry isn’t top notch to say the least. The movie has enough action and enough laughs to be INTERESTING, but most of the humor fell a bit flat as Kumail’s style of comedy just didn’t seem to mesh as well with Dave’s brooding physique. The movie is entertaining enough as a rental, but the great video and the awesome audio track for the 4K UHD makes it a bit more palatable as demo material. Either way, this is really a rental at heart unless you have a big thing for either of the actors.