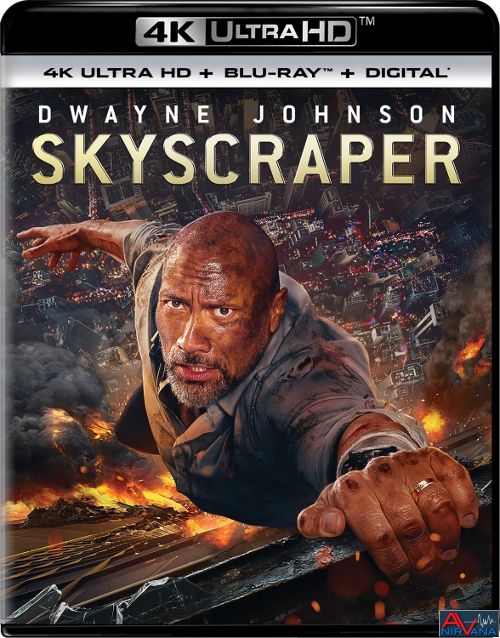 Movie
For those of you who were expecting a grand masterpiece of epic proportions (all 2 of you), then I would say your hopes were a bit high. For all the rest of us who saw the summer trailer for Skyscraper we all knew what we were getting into. The Rock running around and jumping into a fire covered building to save his familie’s lives. Basically an amalgamation of a dozen other “trapped in a building” films like Die Hard, just with the Rock and the fact that he’s supposed to have false legs. That about covers it. The Rock, jumping into a burning building, and punching n’ shooting bad guys along the way. Rinse and repeat for an hour and 40 some minutes and you have your film. Skyscraper isn’t a bad film, but it IS a rather generic one that borrows from a bunch of other superior movies. Like Rampage it’s a fun rental, but isn’t the greatest Dwayne Johnson movie in his resume.

Skyscraper was written and directed by Rawson Marshall Thurber (Dodgeball, Central Intelligence, We’re the Miller), but this is NOT a comedy. If you were expecting a goofy action film than look elsewhere. At least in the scripting, as the actual execution of the action sequences are definitely chuckle worthy at time. The second time that Thurber has worked with Dwayne “The Rock” Johnson, this outing is a bit less intentionally humorous, and tries to mimic films like Die Hard in tone and scope. The reality of the situation is though, this is a dumb action flick akin to San Andreas and really shouldn’t be thought of as much more than a disaster film in a smaller setting.

The film sets up our hero pretty quickly. Will Sawyer (Dwayne Johnson) is an FBI hostage rescue commander who gets his legs blown off in an op that goes south. 10 years later he heads up a private security analysis firm that goes in and inspects buildings for possible security problems. After getting hired by Zhao Long Ji (Chin Han) at the bequest of an old buddy, he gets in way over his head. Zhao is heading up the most sophisticated building in the entire world, centered in Hong Kong and almost 200 stories high. Just as he’s about to sign off on the security, Sawyer finds out that the entire thing is a setup, and that he’s the fall guy for a paramilitary team who wants to take a super secret flash drive from Zhao and burn the whole building down in the process. The only thing is, Sawyers family is on the inside, and they just off the wrong guy.

Yup, it’s crazy, it’s zany, and it’s a wild mixture of Die Hard meets Crank meets San Andreas. And it’s Fun at the same time. I won’t say that Skyscraper is a GREAT movie, but it’s a goofy action flick that borrows enough fun cues from enough better movies to be visually fun. The Rock is a charismatic action star and that’s really what counts. He sells the film in what would otherwise be a generic flick that pits terrorists up against the lone action hero once more. This time with a gimmick though. With Sawyer’s missing legs you would think it would play a big part in the plot, and while you’re right, you’re also wrong. You see the Rock gimp around a bit, but it’s really just a neat little trick to keep you engaged in the story. He still pummels bad guys and smashes things like the hulk, just with a bit of a wonky gait. No, this is NOT anything special, but it is fun and I had a blast watching Johnson jump from building to building and be a hulked out Ethan Hunt/John McClane

Rated PG-13 for sequences of gun violence and action, and for brief strong language

Skyscraper was shot on a variety of Arri Alexa cameras with a supposed 2.8k, 3.4k and 6.5k source capture resolution and then transferred to an unknown resolution digital intermediate (I’m GUESSING a 2K master as 2.8k and 3.4k source material was most of the film, and that’s pretty standard for that capture level). The end result is a 4K UHD disc that is...dare I say it...”Rock” solid? (sorry I couldn’t help it). The image is quite pleasing to the eye with deeeeeeeep black levels that are a healthy step up from the 1080p Blu-ray disc included in the package, and the resolution bump shows some really nice textural details that didn’t show up on the Blu-ray. The Rock’s stubble and greasy, grimy face show up with incredible clarity, and the CGI backdrop of the Pearl is stunning for the most part. As is the case with a lot of CGI intensive film, some of the action sequences look a bit soft and smooth due to blending CGI with live action, but overall this is a very nice 4K UHD disc that handily beats the already great looking Blu-ray.

The Dolby Atmos track on the 4K UHD disc is well worth the listen, with the knowledge that this is mixed just a tad lower than I was expecting. A good 3 DB boost was needed on my receiver to reach reference level, and then this was balls to the walls amazing with a great sense of immersion. The sense of claustrophobia in the Pearl is intense and incredibly immersive, with the sounds of the blaze surrounding the viewer in a cocoon of raging fire. Action bits are powerful and show great directionality, such as when Sawyer is jumping around the hall of “mirrors” with bullets wizzing around him. Depth is incredible, with deep LFE thundering from the depths of the fire, and the score flows effortlessly through the myriad of channels. Overheads get some neat interaction with the sounds of the helicopter and the fire raging overhead, and one of the really neat sequences is when Sawyer heads out onto the balcony and jumps into the swirling thing surrounding the computer core (yes, thing is a technical term). All in all it’s a great sounding Atmos mix.

Skyscraper is exactly as the trailer portrayed it to be. Pure, unadulterated, mindless fluff. It’s silly, stupid, and really nothing of consequences, even for the rock. It’s just lots of stunts, explosions and silly fun. The movie is truly terrible from a technical standpoint simply because it’s the amalgamation of about a dozen other “trapped in a building” movies, just with the Rock and lots of fire. I had a good enough time, but let’s not kid ourselves that this is nothing other than popcorn entertainment that’s NOT going to be a classic anytime soon. Universal’s 4K UHD disc is just about spotless though, and with a decent array of extras makes for a fun popcorn movie as long as you full understand that you MUST leave your brain at the door. Recommended as a fun rental.

Thanks for the review. Will check it out on a lazy Sunday.

I saw this movie with the family when it first came out and I thought it was good. It's hilarious seeing Dwayne do all of those jumps and using his fake legs as a weapon to fight with lol. I agree a fun rental vs purchase.

I want to see this... but torn on whether I should buy 4K or rent Blu-ray.

Mike -- does the BD have Atmos?

Todd Anderson said:
I want to see this... but torn on whether I should buy 4K or rent Blu-ray.

Mike -- does the BD have Atmos?
Click to expand...

Mike - would you consider this necessary reference audio to have on hand?

Todd Anderson said:
Mike - would you consider this necessary reference audio to have on hand?
Click to expand...

Necessary? No. It's a great Atmos track, but there are a TON of great Atmos mixes out. However, if you like the look of the movie, it's a fun little outing.

Gave this a one a spin this AM. I liked it - kind of a poor man’s Die Hard. Totally fun... great visuals. Super audio.

Unfortunately, my disk had some sort of authoring error that left me with a decision: but another copy? Fortunately, Amazon has it on sale for $14 new. Easy choice

what error did you have?