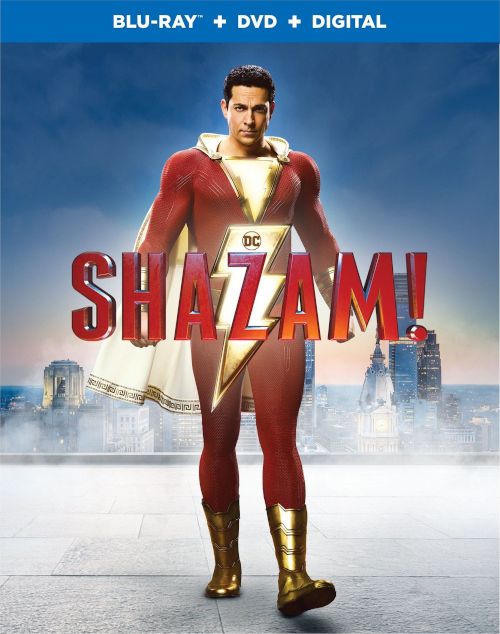 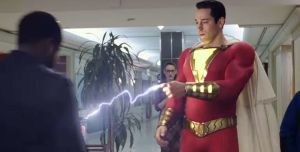 Movie
It’s not uncommon knowledge that the DCEU has had a hard time catching up to the MCU in terms of quality and cohesiveness. Sadly it was a case of “I want what they have!” as Warner and DC executives rushed their first handful of films to try and go full bore towards a Justice League film rather than spending the years and films to world build towards that even, instead trying to make their own billion dollar + version of The Avengers. After some trial and error Warner and DC seem to be learning that it takes time to world build, and have been instead focusing on laying the ground work with individual superhero films that tie into each other. Wonder Woman was the standout film in the DCEU (and is still easily the best film in the universe), but last year’s Aquaman was a breath of fresh comic book air, but I was a little nervous about Shazam!. The character is great, and it’s one I’d wanted to see on screen for quite some time, but the trailer made the film out to be a goofy little kids movie, something which didn’t seem to jive with the super seriousness of Zack Snyder’s influence on the DCEU. However, I have had to eat a whole plate full of crow, as Shazam! Ends up being the second best film in the DCEU (just edging out Aquaman) and masterfully handles the light hearted nature of the script with serious super vibes (plus it sets up the Black Adam movie in the next year or so and opens up the world to SO much more with the 7 realms).

The film opens up with a glimpse at our soon to be villain (played by Ethan Pugiotto in that scene) being summoned as a child by the wizard Shazam (Dijimon Housou) who is in search of a successor to his power. Tempted by the lure of the 7 deadly sins that Shazam has imprisoned in his lair, the child is sent back to 1974 where we segue to the hero of the film, Billy Batson (Asher Angel). Billy is kind of a juvenile delinquent, constantly running away from various foster parents in a desperate attempt to try and track down the mother that he lost so many years ago. Falling in with a group home of misfit foster kids, Billy has only one “kind of friend”, his new foster brother Freddy (Jack Dylan Grazer). However, his life changes drastically when the wizard Shazam pulls him into his realm to see whether he is worthy of accepting the wizards power.

You see, the little boy who was rejected so many years ago has grown up to be a scientist known as Dr. Sivana (Mark Strong), and has come back and accepted the dark power of the 7 deadly sins demons, transforming him into a powerful weapon of evil. Shazam is at the end of his life and his powers are so weak that he cannot fight Dr. Sivana by himself, and still hasn’t found a champion. Taking a chance on the delinquent kid, Shazam transfers his life force and power into the young boy, transforming him into a muscled body with all the powers of the 7 realms at his disposal (Zachary Levi). 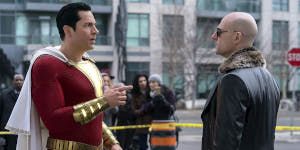 At first Billy doesn’t want the powers, but soon it becomes VERY obvious that this is every boy’s dream come true. To be an adult and have all the fun of an adult, PLUS have super powers! Thinking it’s just a game, Billy gets a bit too big for his britches and milks the populace of Philly for all it’s worth, doing piddly little “heroic” gestures, playing in public to get people to like him, and generally be an all around douche to his family. But when Dr. Sivana comes looking for the only person who can possibly beat him, Billy has to “man” up and accept responsibility for the powers that he’s been given.

Shazam! is a barrel of fun and actually WAY more entertaining than the trailer gave it credit for. I was very suspicious of how lighthearted and comical the trailer was , but director David F. Sandberg balances childlike nature of Billy Batson with the realities of superheros. It doesn’t take on the dark mantle of Zack Snyder, but winks and nods at the camera, viewing the entire superhero world through the eyes of a young teenage boy. Billy is absolutely perfect as a child who’s desperately seeking approval, and his alter ego is played to perfection by Zachary Levi (who has mastered the ability to play a child in an adult’s body through his years as Chuck).

For comic book fans everywhere, THIS is the original Captain Marvel. That is before Marvel comics patented the name after DC had been using it from the 1940s and DC was forced to change his name to Shazam for legal reasons. There’s been some changes to the character here and there, especially with how Billy doesn’t seem to have access to all Shazam’s powers, as well as some personality quirks when Billy turns into his alter ego. The same thing can be said for Dr. Sivana. If you’ve read any of the past comics this is NOT the Dr. Sivana that we’re used to, but rather taken from the 2012 re imagining of the evil villain. The original Dr. Sivana was like the Lex Luthor of Shazam. A brilliant scientist and businessman who used gadgets and gizmos and manipulation to fight the hero. In 2012 he was reimagined as having super powers as well, though not on the same levels as Shazam has as wizard of the realms. This is the version we see on screen today, with Dr. Sivana taking the powers of the 7 deadly sins and using them to fight Shazam one one one.

Shazam! plays pretty safe with the super hero tropes that we've all seen in a million comic book movies ,but it does them rather well. Billy is a delinquent with a heart of gold underneath, proving that the're being "worthy" doesn't mean you're externally perfect. The typical origins techniques are in full swing, with Shazam learning how to use his powers, getting his butt kicked by Dr. Sivana at first, then coming back even stronger and more determined thanks to the power of family. Interestingly enough, family is probably THE biggest lesson the movie has to offer, as the world of Shazam (in both the comics and the movie) revolve around Billy Batson and his family of misfits (and soon to be something else that I won't spoil). It's a sweet story, and while it's been done before thematically wise, is pulled off rather well.

The film does a great job with world building, laying the groundwork for the upcoming Black Adam film starring the rock, as well as laying cobblestones for a trip into the other 6 of the 7 realms in Shazam! 2. Black Adam is one of those characters that EVERY Shazam! fan was begging for from the get go, but Dr. Sivana was actually chosen on purpose. Supposedly the original script had Black Adam (another one of the super powered wizards champions gone bad) as the main baddy due to him being the main antogonist for Shazam over the years, but the powers that be decided that he was too important of a villain to throw into an origins story. Instead they hinted at his existence (hint hint, 7 thrones, only 6 wizards at the end) in the film, and we get a feature length film starring The Rock in a year so so to segue into him appearing in Shazam! 2. 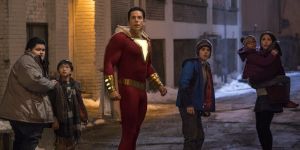 Shot on Arri Alexa min cameras, Shazam! looks absolutely gorgeous on Blu-ray. A rich and lush looking environment, it excels with all of it’s brightly lit colors, with sharp primaries and a vivid snowy winter backdrop on the city of Philadelphia. Shazams bright red outfit and yellow lightning bolt pop off the screen throughout, and the flashing electric magic bolts sparkle and sizzle through the atmosphere. Fine details are impressive, with every line and crease on the costume showing up (sometimes a bit TOO well, as the muscle suit is even more obvious with such clarity), creases on Mark Strong’s face, and textural details in the city are all amazing. The scene where Shazam saves the bus is jaw droppingly precise and clear, and even in the pitch black of night you can see tons of shadow detail.

Yum, Warner and their DCEU films have always stood head and taller over what Disney has done with their superhero Atmos tracks, and this is a BRUTAL track to listen to. The dialog is clean and clear, and the surrounds are something to die for. The overheads and surrounds are filled with the swooshing aerial battles between Shazam and Dr. Sivana, as well as swirling demons, crunching rocks, and the echoing chamber of the wizard’s lair. The overheads are used WAY more than I was expecting, with tons of discrete sounds as well as light ambient background noise as well. Now the LFE is something else entirely. I was absolutely SHOCKED at the amount of bass that was in the movie, as this is the first time I actually had to knock it down by 3 full decibels on my receiver as it was just punishing. Dr. Sivana accepting the demonic eye is jaw dropping, and actually made my subwoofer amp run a clip light for a fraction of a second there and make me wonder if I had cracked drywall. The LFE doesn’t stop there though, as the whole movie is just filled with earthquake level bass with every battle, ever time Shazam blasts off from the ground, and countless other crashes and explosions. I almost wonder if it was too hot as I swore I heard some clipping in the actual track, but it’s not nearly so bad as Godzilla was. All in all, this a POWERFUL and aggressive track that sure to put a big sloppy grin over any bass head’s face. I did notice that Warner had put in a 5.1 Dolby Digital track in English as well (no DTS-HD MA track this time) along with the Atmos, but that the Atmos track is selected as default, so no need to go into the menu and change things like Warner is known to do.

Is Shazam! perfect? No, but it is certainly a LOT of fun and probably the second best film in the entire DCEU under Wonder Woman (both completely different styles of films, but both equally entertaining). Zachary Levi knocks it out of the park and David Sandberg does a masterful job of keeping the comedy in check with the action, and vice versa. The Blu-ray and 4K UHD releases are both stunning in terms of video and audio quality, and the extras are actually really good comparatively. This is a fun and refreshing super hero film that put a huge grin all over my face while watching, and acts as a great counter weight to some of the darker and more brooding DCEU movies that we’ve seen lately (outside of Aquabro). Definitely a great watch and well worth picking up if you’re a fan of fun super hero flicks.

Hello there bass. Where have you been?

Just added this to my watch list for a purchase down the road. If there's bass, I'm in!