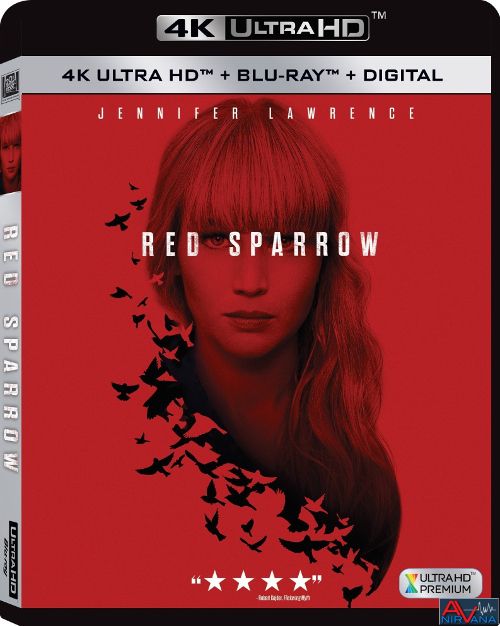 Movie
Jennifer Lawrence has had an interesting bell curve on her career. She started out as a child actor in films like Winter’s Bone, and appearing on the Bill Engvall Show, only to be shot to stardom with The Hunger Games franchise. Starring in such award winning films like Silver Lining’s Playbook, American Hustle, and the newer X-Men films, she made a powerful name for herself as one of the highest paid actresses in Hollywood. However, this fame has not lasted THAT long, as the last several films she has chosen have all flopped rather miserably, despite her best efforts. Joy, mother!, and Passengers were met with middling success to downright failure (Joy is probably the most joyLESS films I’ve ever seen), and her attempt at reuniting with Hunger Games franchise director Francis Lawrence (no relation to Jennifer) in a dark and brutal spy thriller meet with the same tepid results as her last few films have been plagued with.

Dominika Egorova (Jennifer Lawrence) is a prominent ballet star in Moscow, on an upward climb to the top as she dances in front of the elite of the Soviet Union. Taking care of her ailing mother, Dominika tries her best to balance loving care of her family with fame and fortune, but fate has other plans for the dancing queen. When her partner misjudges one of Dominika’s leaps, he comes down squarely on her calf, shattering the bone and effectively ending her career as a dancer. With nothing left to look forward to, the young dancer turns to the super secret “Sparrow School”, which is a tough as nails school to make innocent looking civilians into super spies. After a brutal set of tests and trials to make her into said super spy, Dominika emerges from her training as the most dangerous Sparrow to ever graduate.

On her first set of assignments out of the gate, she comes into contact with the enemy. A lone CIA agent named Nate Nash (Joel Edgerton) who is trying to prove to his own CIA handlers that he can get something of value out of the eastern bloc. Manipulating each other, the two play a game of cat and mouse, with Nate doing his best to get the seductive Dominika into putting her faith into ONLY him as someone who can be trusted. When a handoff goes wrong, Nash’s contact within Russia is compromised, and his role there severely diminished as he has to go on the run, with no one to turn to but Dominika.

For a film that clocks in at over 2 hours and some odd minutes, Red Sparrow is surprisingly light on story line and coherence. The film centers around the cold war stand off, but much of the run time is spent with large quantities of under developed plot points that just skitter around from one to the next. One point of interest is that the film really FEELS like an old Cold War film, even though it’s set in modern times. Something that makes the old CIA vs. Russian Super Spy trope feel a little bit out of place. Even though the movie SEEMS straight forward and simple, it’s really not. At least it SHOULDN’T be. There are copious side stories and side characters (such as Mary-Louise Parker and Jeremy Irons), but barely enough time in the bloated film to even partially flesh out the complexities. Instead it dances around, much like Dominika at the beginning of the film, flitting from one to the next without actually going into enough depth to justify having so much bloat.

Acting wise, the performances are solid across the board. Lawrence does her best to make Dominika interesting, and so does Edgerton with Nash, but so much of the film is just plain ridiculous that the seriousness is lost on the viewer. Plot points so ludicrous that they would be in a James Bond film, or in a Pink Panther parody are taken with a dead pan seriousness, and the viewer just can’t reconcile the lunacy with the intended straight man performances. Not to mention the over the top Russian accents given to the characters, even though when they speak in English it sounds like they’ve been a native speaker for decades (which they technically have). I wanted to like Red Sparrow more than I did, but Francis Lawrence stumbles rather badly with the film and while he does weave in some interesting points, tends to fail as many times as he gets it right.

Shot on a variety of Arri Alex cameras and actually finished at a full 4K resolution master, Red Sparrow looks fantastic on the 4K UHD. It’s not going to be a film that looks all glossy and shiny, with brightly saturated colors, but it is nearly perfect in it’s intended presentation. Colors are a bit muted and dull, but still accurate and clean, with solid saturation for splashes of primary colors (such as Jennifer’s sparkly red dress). Facial details are simply immaculate, and the increase in resolution and clarity from the 1080p disc is sometimes quite startling. Look at the close ups of J-Law’s face when she’s sitting on her bed near the first act. You can see every line, every hair on the face, and every stroke of makeup with crystal clarity. Contrast is a bit on the low side, but black levels are immaculate, with only some mild crush to keep the darker scenes from being perfect. The use of HDR is subtle, but you can definitely see more detail on structures and backgrounds, with that slightly hazy look from the Blu-ray cleaner and sharper to the eye. Colors show some additional warmth, and the glossiness of shiny objects (such as jewelry, and sparkles on dresses) are a bit more vibrant and rich as well. Although, I did notice some deviations from the Blu-ray. Browns look a bit different, with more earthy tones throne in, and the second act with Nash that was so heavily orange in the Blu-ray, looks a bit more tawny in color. No wild color deviations, but just slight changes that give it a slightly different feel.

Red Sparrow’s Dolby Atmos track is a slight improvement over the really good 7.1 DTS-HD MA track of the Blu-ray, but it is still a rather restrained track at the end of the day. HOWEVER, the mix is definitely immersive and sonically rich if you take the time to listen to it. The urban environments give ample room for hustling and busting sounds of activity, while the score by James Newton Howard flows effortlessly among the tracks. There’s some solid use of the overheads with a few discrete noises, and it IS an upgrade over the DTS-HD MA track of the Blu-ray, but not as much as imagined being that this is a dramatic film with few boisterous moments. LFE is tight and clean, and the vocals are well defined and located straight up front in the center channel. Fidelity is always crisp and sharp, and while it’s not a Transformers type of track, the Atmos mix on the disc is WELL done in all ways.

Red Sparrow isn’t a complete mess, but it’s not a good film either. The plot is completely ludicrous, with elements of Black Swan insanity thrown in as well. The desire to make this a spy movie with salacious over tones that may surprise some viewers of Jennifer Lawrence grates against the pedestrian nature of the film’s plot. We have English speakers taking on hilariously bad foreign accents, cheesy sex scenes that serve no real purpose, and a run time that’s so heavily bloated that a good 35 minutes of the film could be trimmed down and still not hurt the story in any noticeable way. The 4K UHD is a solid improvement over the 1080p Blu-ray, but neither the technical aspects or the desire for a premium product can get around the fact that the movie itself is a slightly boring, over the top mess for Jennifer Lawrence’s career. Rental is my personal opinion for a recommendation.

Thanks for the review. I expected much more with all the hype that was going around.. Will check it out as a rental.

Thanks for the review. I have contemplated renting this film but just can't because I hear and from your review it is slow and it's over 2 hours long. These days I am not into CIA stuff as much.

I know that feeling of indecision, Asere. Best to follow your gut. Time is precious!

Well, we watched this today and I’ve gotta say I personally enjoyed it. I definitely think this movie won’t be for everyone due to nudity and some scenes were almost uncomfortable. I found the story to be well written but maybe the accents at times seemed a bit off. It wasn’t a deterrent for me in my enjoyment of the movie though.

glad you enjoyed it. It's a bit of an interesting film, but definitely controversial in some points

Yep, controversial to say the least. I would think they were pushing the limits of the “R” rating.

the funny thing is, they were really a weird juxstaposition to the brutal violence of the film as well. It was strange as they weren't meant to be titilating, but act as a foil to the brutality and inhumanity that they were forced to live in the world of a spy. Kind of fascinating to say the least