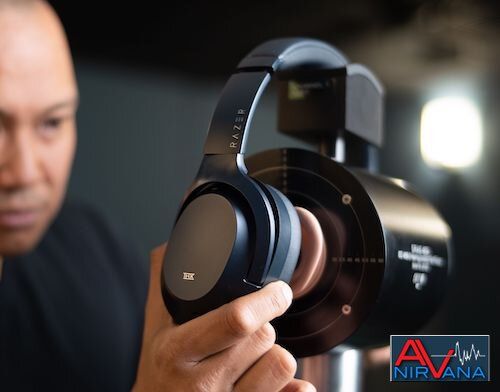 (May 21, 2020) Razer’s latest headphone model, Opus, is a sleek audiophile-grade model, with an added stamp of approval from THX’s lab of scrutinizing AV technicians. If you’re familiar with the brand, then you likely associate Razer with the gaming world, but Opus is a bit of a different breed, crafted to put audio playback at the forefront with some added conveniences.

Costing a moderate $199, Opus looks comfortable on paper and in PR photos, weighing a tad more than half a pound and featuring plush leatherette surfaces. Owners can opt to connect to sources using a traditional 3.5mm cable while having the ability to cut-the-cord and enjoy an estimated 25 hours of wireless performance (charging via USB-C). And to further enhance the user experience, Opus has auto-play/auto-pause, which plays audio when the headphones are positioned on the head and pauses audio when placed around the neck. Additionally, onboard user controls include volume, power, multi-function, noise cancellation, and operational indicator lights.

As referenced, Opus has several convenience factors that make it more than just a standard pair of headphones. Yes, Bluetooth 4.2, AAC, and APTX (among others) wireless performance is one realm of convenience, but Active Noise Cancellation managed by four different microphones is another. While it’s no mystery that ANC shelters a user’s ears from outside noise, Opus also has an option to let the outside world be easily heard using a “Quick Attention Mode.” And, running ANC doesn't intrude upon the headphone's 25-hour wireless operating specification.

The THX Certified Razer Opus can be purchased now direct from Razer or though Amazon.com.
Last edited: May 22, 2020