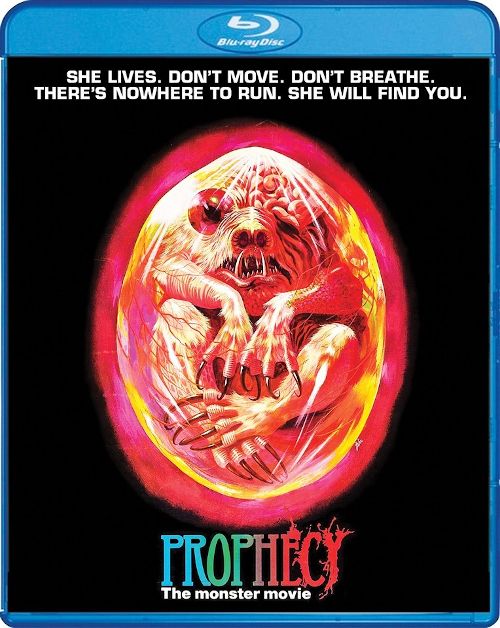 Movie
To follow up Dracula 1979 we have one more horror film from 1979 thanks to Scream Factory. This one is a bit of an odd anomaly that I remember from my very young days, having seen Prophecy on the TV back when I was 8 or 9 years old, and haven’t seen it for about 30 years. The film is one of the last of it’s kind, utilizing the whole eco-terror craze of the 1970s, but going full 1980s at the very end, with a whole third act devoted to a mutant bear slashing and tearing it’s way through the surviving humans. It’s an odd film to say the least, and the first two acts feel tonally different than the third act by a large margin, and while I appreciate the slow burn of the first 2 acts, feel that director John Frankenheimer had a good grasp on how to tell a compelling horror film.

Dr. Robert (Robert Foxworth) is a social worker trying to make a difference in the inner city when he is approached by the EPA to investigate a situation out in Northern Maine in a small logging community. There a group of Native Americans led by John Hawks (Armand Assante) is disrupting the logging group’s efforts to cut down trees, claiming that the logging company is pouring chemicals in the water. Dr. Robert and his wife Maggie (Talia Shire) head down there and investigate as much as they can, only to find out that John Hawks and his tripe are suffering from severe mutations and still births. Babies are born in a mutated state, the plant life around them is changing, and animals are growing HUGE out there according to him.

Looking into the logging company’s methods, Robert can find no evidence of chemicals in the logs, and their waste shows no signs of it either. But no matter the evidence at hand, Dr. Roberts has this strange inkling that he’s missing something. Then he finally stumbles upon the secret. Methyl Mercury sprayed over the logs, and falls off when they are transported downstream, being left in the drinking water. Running back to check on his theory, the crew run into a creation of the mercury’s poisoning. A gigantic mutant bear that will stop at nothing to retrieve her cubs, one of which is a test subject for the good doctor.

Prophecy is a hit or miss film that is sort of at odds with itself. The first hour of the movie is a slow burn mystery that really sets it up for a big corporate conspiracy, with the logging corporation at the heart of the mutations and issues that the Native American community is experience. However the third act throws that all away as Frankenheimer goes full bore into gore and monster slasher when the mutant bear starts stalking the doctor his crew. Coming from a 2000’s era of CGI and effects, the bear costume and the animatronics used to creat the beast are a bit laughable, and some of the deaths are actually rather humorous instead of being scary.

I wanted to like the movie more than I did as I remember being terrified of it as a kid, but Prophecy’s use of eco terror is undone by the more traditionally 80s method of monsters tearing and eating up the place. The end of the movie rather anti climactic, as if Frankenheimer couldn’t figure out a way to solidly sell the flick’s scariness after the bear was killed off. It just sort of fades off with several sub plots left loose and floating, and the biggest issue still being that it wasn’t SCARY at all. I liked the slow burn eco terror mystery of the first 2/3rds, and while the gory action was certainly fun and exciting, was too tonally different than the rest of the movie to really make much logical sense.

Scream Factory hasn’t made any mention of a new 4K or 2K master used for this release, but the Blu-ray itself looks rather good, if not startlingly good, at times. The 1979 production has a nice thick layer of grain over it, but usually never too intrusive. Some of the low light sequences and effects ridden scenes tend to get a bit swarmy (such as when the helicopter sets down, or at night when the mutated bear attacks) Clarity is often very sharp, with a fairly neutral color grading for the 40 year old film. Blacks can get a teensy bit murky, but really remain faithful to the presentation, with only minimal crush going on. Faces lean towards the ruddy end of the spectrum, but contrast is even and balanced, with daylight shots looking extremely crisp and sharp. 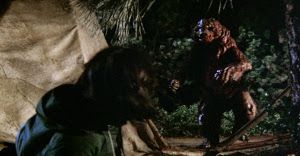 The 2.0 DTS-HD MA track is simple, but accurate to the source, and rather robust for a 2.0 track. Leonard Roesman’s score rings with clear authority, and the musical numbers seem to give most of the weight and heft to the track. The dialog is clean and clearly replicated in the mains, and evenly balanced with said score. I DID notice a few times that dialog could get a bit muted when someone turned away from the camera, but it was never more than a little bit and only noticeable if you’re really paying attention. The bits with the mutated bear have the most energy, and have a surprising amount of rumble in the midrange for a film of this type. The track isn’t a show stopper, but certainly very capable and more than able to handle the elements thrown at it.

Prophecy is one of the last of the eco horror films of the 1970s, and it is a bit of a mixed bag. The first 2/3rds of the movie is a slow and steady build up for a corporate cover up, but in the third act that plot line is pretty much thrown out the window as everyone fights for their life against the mutated bear in all of it’s gory glory. In that respect it sort of bridges the gap between 1970s and the gory 1980s films, but it makes for a movie that seems tonally unbalanced as well. The fight scenes are kind of laughable in today’s world of modern CGI and effects, and the scares are nearly not there at all. The first 2 acts do make a semi decent thriller, but that third act, as goofily exciting as it is, just undermines most of what came before it. Scream Factory’s Blu-ray release has good audio and video, and extras that really should make this a collector’s edition, just without the slip cover and packaging, so for fans of the movie, you won’t be disappointed. All others, I would suggest a rental before blind buying.