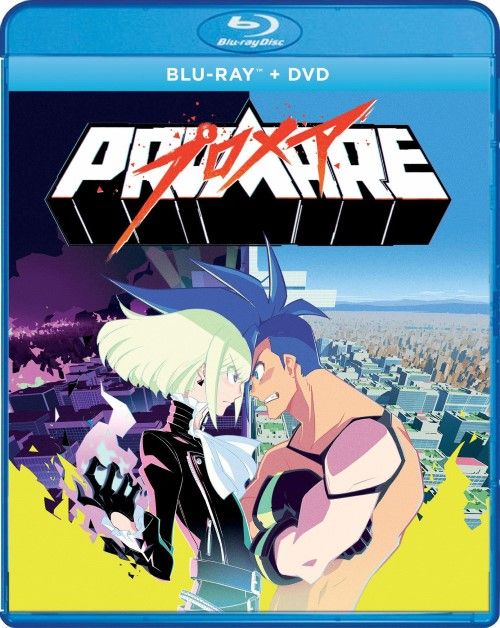 Movie
As a huge fan of Gurren Lagann and Kill la Kill I was more than stoked to check out Promare. Released through the Gkids line of films it comes from team Trigger, who became infamous through the afore mentioned two anime shows. The film is pure high octane energy mecha anime with a hint of strong sci-fi, the slapdash humor of Gurren Lagann, and some very odd animation to round it all out. I’m not sure if the film ever reaches the amazing heights of Lagann and Kill la Kill, but it’s a rousing comedic mecha anime with plenty of action and fast paced humor to keep most people interested.

Set in the distant future, Promare is a story about good vs. evil. A certain subset of humanity hash mutated to where they can control fire and flames that cause destruction everywhere they’re let loose. These humans (much like mutants in the X-men universe) are generally reviled and thought of as terrorists. The leaders of the burnish movement are known as “Mad Burnish”, a group of roving fire starters who seem to burn at random. Galo Thymos is a brash firefighter who employs some fantastical ice devices to put out the fires of the burnish. When he takes Mad Burnish’s leader prisoner he finds out that not everything is as it seems.

Lio Fotia, head of Mad Burnish has his own agenda, and it seems that Governor Cray, head of the human kind, has been using burnish mutants for his own experimental gain. He figures that the earth only has a few months to live because the flames within the earth are starting to rise, and he plans to use the burnish as fuel for his experimental warp drive. A drive that he can use to evacuate a small set of earth’s population and populate a brand new world with. Only thing is, there’s another option, as the fires that burn within the burnish have a will of their own, and with Lio and Galo teaming up together, there just might be a chance to save ALL humankind, burnish and normies alike. 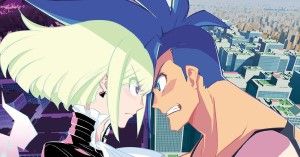 Promare is lightening fast paced and quite the action packed mecha story. The plot is heavily tongue and cheek if you look at it closely, as you can see the names of special moves and the names of some of the mecha (Deus Ex Machina for example) are VERY much Team Trigger winking and nodding at the mecha anime conventions and tropes that have littered the genre for decades. You can also definitely see some of Gurenn Lagann’s Kamino in Galo, as he winks, nods and cheerfully uses the power of his own enthusiasm to fuel his own power (something that Kamino was famous for). HOWEVER, the story does have a hard time really fleshing itself out. The plot is pretty recycled if you’re a fan of sci-fi anime. A huge villain is actually the good guys, the bad guy is actually the guy everyone revered, and he just wants to save the earth using the most vicious and cold hearted method possible. He’s not really a VILLAIN per se, but rather an antagonist. Galo and Lio have to team up and use the power of their spirits to kick some serious butt, and then rebuild from the ashes. Simple, easy but also done a million times.

I almost feel as if the animation style is really the main attraction of the film. I don’t say that in a negative way such as saying it’s “style over substance”. But rather that the unique “blocky” animation style that is utilized is so unique and fascinating that you’re willing to overlook some of the cliched tropes that the story utilizes. It’s fun, exciting, and certainly unique in the visuals, making Promare one of the more interesting Gkids releases this year.

Rated PG-13 for some violence and language

Promare is a visual treat from beginning to end, with fantastic colors, unique visuals, and an art style that is definitely eye catching, if not a bit odd. The hyper kinetic films is just one giant mass of colors, more colors and even more. Filling the screen with bright reds, light shades of green and blue, as well as ice whites and various other shades of the rainbow. There IS some color banding if you know what to look for (going under the ice after Galo and Lio’s fight is one of the most egregious) but it’s fairly minimal in the long run, and the 1.78:1 framed AVC encode is nothing short of jaw dropping the rest of the time. The trailer should cue you in to the unique art style that was chosen, and while I was put off by it at first, it kind of grew on me after the first half hour or so. 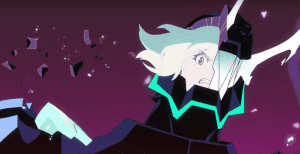 Shout Factory releases the Blu-ray with a duo of tracks here, using 5.1 DTS-HD MA encoding for both a Japanese and English mix. Both sound virtually identical in terms of sonics and feel, but the voice acting for the English dub is drastically sub par compared to the Japanese track. As such, I’m naturally going to recommend the Japanese track. The mix is strong and aggressive, with the surrounds and main channels being used quite copiously through the kinetic action storm. Dialog is intelligible and pronounced throughout, and the dynamic range is quite impressive. My only issue with the mix is that the LFE channel just doesn’t hit AS hard as it could in my opinion. Bass is there constantly, but some of the impacts between mechas and other action oriented scenarios just don’t pack the sonic wallop to register up there with the big boys.

• Promare Trailers
• Side: Galo
• Side: Lio
• Studio Trigger Roundtable
• Interview with Director Hiroyuki Imaishi
• Behind the Scenes with the English Cast

​
Promare is wildly exciting, with non stop action, great visuals, unique art styles, and really good Japanese voice acting (English dub is OK, but nothing stellar), but unfortunately the plot is a bit weak. It’s not horribly weak, but it IS a bit shallow and the visuals kind of are forced to make up for the cliched story line. Audio and video for the disc are quite good as well, and the extras are actually pretty impressive. Shout is also releasing a Steelbook on that is already out as well, AND in August have plans for making a limited edition release with tons more extras and physical goodies. An all around solid anime with a few flaws, Promare is worth checking out.