Once Upon a Time In...Hollywood - Blu-ray Review

Once Upon a Time In...Hollywood 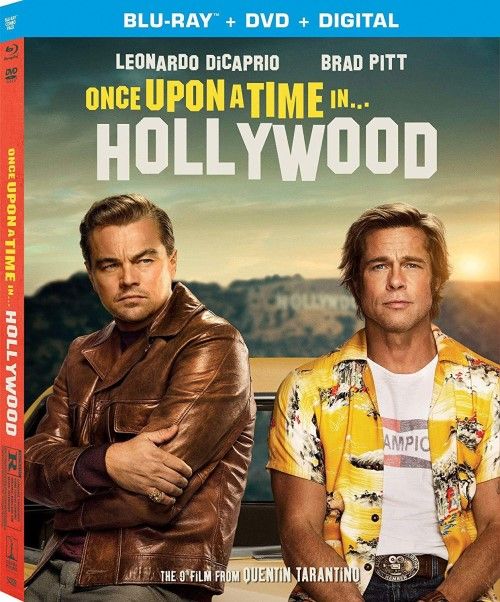 Movie
Tarantino has always said that he wants to make 10 films before he retires, and has reiterated that many times over the years. With this being his ninth film to date, I was super stoked to see the first trailer for Once Upon a Time In...Hollywood only to be left with this strange feeling that this movie didn’t seem to be very “Tarantinoish”. That and the slightly mixed audience reaction left me rather nervous for this review. Well, I’m going to say this. I didn’t end up LOVING Once Upon a Time In…Hollywood, but I really enjoyed it. It’s not your typical period piece or gangster film like most his movies, but rather a slow paced drama that somehow manages to fly even though it’s three hours long, and ends in such a way as only Tarantino could do.

It’s really difficult to write a synopsis for his ninth film, but I’ll give it a whirl. The basic premise revolves around an aging Western movie/TV star named Rick Dalton (DiCaprio) during 1969, as the days of the Western are slowly diminishing on the silver screen and moving to Italy. Dalton is picking up work as the “bad guy” in new TV pilots, being used for his star power to usher in a new group of super star actors, and he’s just now realizing that this means his star is on the decline. He’s stuck without as much money as he wants, his career is failing, and the only person who is really sticking by him is his stunt double Cliff Booth (Brad Pitt). So, digging up his roots, and bitterly coming to grips with his fading star power, Rick and Cliff head off to Italy where they try and make a name for themselves in the new world of Spaghetti Westerns.

Tarantino is one of those film makers that you either love or loathe. Too many times than I could count have I heard that he’s an over rated hack. He’s a man with a lot of words but nothing to say, and that his movies tend to be derivative. I tend to swing to the opposite end of the spectrum, and love that he has a completely different view on film making than other people. You can say that his films boarder on the lurid and gross, while managing to become complete and utter fantasies. The man is utterly obsessed with the films of bygone eras, and westerns especially. But instead of making a traditional western and failing like so many other modern westerns, he makes his own VERSION of a western, adopting bits and pieces of the classics and infusing that into a modern, chaotic fantasy land. You can see these crazy elements on full display in Django Unchained and The Hateful Eight. However, he’s also the kind of revisionist historical fantasy, such as him killing Hitler in Inglorious Basterds. You could say that he loves taking his own view of history, warping it to what he wishes it would have been, then goes completely crazy with the violence and just having FUN.

Once Upon a Time In...Hollywood is probably his most “different” film yet, especially if you’ve gotten used to his over the top violence and witty dialog. Once Upon a Time plays out a much slower pace, and a much less VIOLENT pace than any of his other movies, yet still manages to completely suck you in. A tale about the demise of what he considers the greatest era of Cinematic history is poignant, funny, and completely witty without being overly poetic and verbose like he normally does. The one thing that really stands out as classic Tarantino is the ability to juggle multiple story lines at once. We get to see Rick Dalton come to grips with his fading star power, but we also fully flesh out a sub plot with Cliff and his dalliance with a Manson hippy (yes, good old Charlie Manson), Shannon Tate’s unfortunate life (played by Margot Robbie), and even a little sub plot with Charlie Manson’s crazy gang of murderers. Each one fully fleshed out and given enough time to come together organically.

One thing that made me really want to see Once Upon a Time was due to the controversy that was in the media. Back when the film came out people were really worried about how Tarantino was going to handle Shannon Tate’s character. You see, Margot Robbie’s Shannon Tate was Roman Polanski’s wife who was BRUTALLY murdered by Charlie Manson’s brainwashed hippy minions back in 1969, and people were wondering about how he was going to show this on screen. In actuality, the controversy was over blown, and the final 25 minutes of the movie was basically him going Inglorious Basterds in a modern era. By that I mean he completely rewrites history so that the movie ends how he WISHES it would have been with her, instead of how it actually went. Pure Tarantino, and those final 25 minutes really brings out the inner violent craving that every fan of his was hoping would be in the movie. The other bit of contention was with Bruce Lee. Fans of Lee and his own relatives were rather upset that they made Bruce out to be an arrogant prick, with him getting his butt kicked by Cliff. However, once again I really think that was overblown. Especially when you realize that the whole scene was nothing but a figment of Cliff’s imagination of how he THOUGHT things would go down.

While it’s not a perfect movie, and it’s definitely different for Tarantino, you can see the obvious love the man has for this generation of films, and it’s a blast from beginning to end. There’s not nearly the violence, and not nearly the language of his traditional fare, but Once Upon a Time is a thoroughly entertaining romp and ends in such a brutally satisfying manner that I want to go see it again.

Rated R for language throughout, some strong graphic violence, drug use, and sexual references

Surprise surprise! Once Upon a Time was filmed with actual film stock (Tarantino is vehemently against using digital cameras for his movies) and it looks AMAZING on Blu-ray. The 2.39:1 AVC encoded disc is superb, as Tarantino painstakingly recreated the look and feel of the late 1960s. The imagery is crisp and clean, with wonderful detail levels all around, while using some muted colors and layering it with a crispy, yellowed parchment look. However, you can still see every beard hair on DiCaprio’s face, and every bit of blood and grime on Cliff’s craggy hands when he fights off some hippies. Blacks are deep and inky, while background shots are rich and luscious to the eyes. Tarantino utilizes a mixture of 35mm film stock for the main story, but also adds in some 8mm and 16mm shots for the old classic Rick Dalton movies that get displayed throughout the runtime. Naturally those look a bit worse for wear than the 35mm stuff, but that’s very much intentional, as the director wanted every scene to look period appropriate according to the recording material that was on hand back then. All in all, a stunning video representation as always.

Even though Tarantino had made a conscious decision to not use a Dolby Atmos (or DTS:X) track for Once Upon a Time In...Hollywood, Sony has still decided to slightly gimp the audio mix for the Blu-ray over the 4K UHD. While the 4K disc sports a 7.1 DTS-HD MA track, the Blu-ray is given the “lesser” 5.1 DTS-HD MA encoding. However, don’t be scared, this is still a great sounding mix with a rather spacious sound stage to enjoy. Even though this isn’t one of his normal action oriented tracks, the retentive Quentin Tarantino has crafted a robust and exciting mix, as he uses his 60s themed score to really pump up the volume. Dialog is always clean and clear as expected, but the surrounds and mains get a ton of ambient activity as Rick Dalton tries his hands at the spaghetti western genre, or the rumbling and hubbub of Los Angeles city with Cliff driving all over the place. It’s a very intense and exciting mix, that uses moments of quiet clarity contrasting with sharp violence and explosive action to keep the listener engaged. Bass is super powerful and aggressive when called upon, but also quiet and nuanced when not needed. Bits of action hit hard and heavy (such as the gunshot during the final confrontation with the Manson family), as well as just a couple of guys having a talk in the bar where only the 60s rock score needs it.

• Over Twenty Minutes of Additional Scenes
• Five exclusive behind the scenes pieces including:
-- Quentin Tarantino's Love Letter to Hollywood
-- Bob Richardson – For the Love of Film
-- Shop Talk – The Cars of 1969
-- Restoring Hollywood – The Production Design of Once Upon a Time…in Hollywood
-- The Fashion of 1969

Once Upon a Time In...Hollywood is pure Tarantino, but a more reflective and somber Tarantino for his 9th film in Hollywood. I will admit that this is not as perfect as some of his past works, but I really applaud the director for branching out and taking a different angle on his obsession with classic cinema instead of just recreating another violent revenge fantasy. It’s witty, charming, funny, and completely has his fingerprints all over the movie. I think replays will definitely get more out of this one, as it’s much more layered than I was expecting. Not to mention Brad Pitt and DiCaprio absolutely KILLED it in their portrayals of Rick and Cliff. The Sony Blu-ray transfer is amazingly detailed, and the audio mix stunning as well. The extras are a Bit slimmer than I was hoping for, but nothing that anemic, so don’t let that dissuade you from watching this wildly entertaining outing from one of my favorite directors.

Thanks for the review. Will check this movie out.

Was Quentin on screen in the film? Ya know like he does cameo.

I actually didn't see him once and IMDB doesn't list him as a cameo. surprising
T

Happy to hear this looks (and sounds) good on 4K as I loved the movie. Really looking forward to the rest of Tarantino's catalog to be released in 4K as well.

I didn’t see this in the theaters.. but a must buy for me. Big fan of Tarantino.
How violence heavy is it, Mike? My wife hates violence... wondering if this one she might be able to stomach?

gonna keep it spoiler free, but it's REALLY tame comparatively to his other films. That is until it hits the last 25 minutes where about a 10 minute scene goes full Tarantino in that regard.
T

It really is tame compared to his other movies and like many of his other movies the violence is so over the top as to almost make it comical which for me makes it a lot easier to watch.
but yeah she might end up covering her eyes for that 10 minutes at the end lol

My wife doesn't like the violence either, but made it through this one without too many complaints. She did cover her eyes in the one scene referenced above, but it's such a small part of the movie that it didn't offend her.
You must log in or register to reply here.
Share:
Facebook Twitter Reddit Pinterest Tumblr WhatsApp Email Link