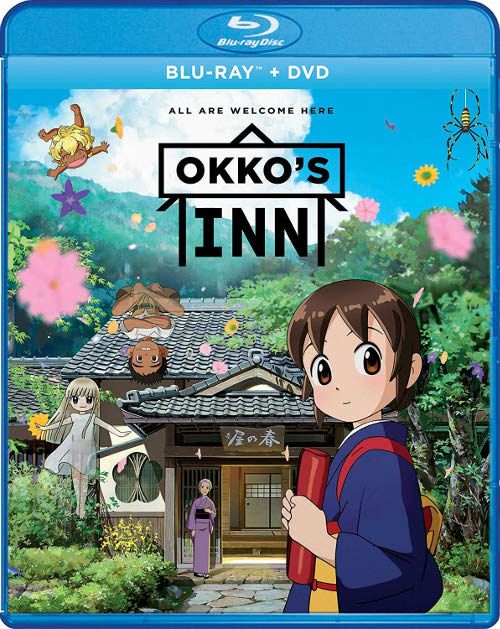 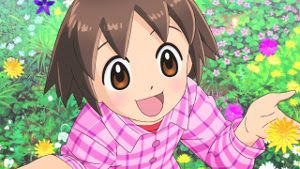 Movie
With Studio Ghibli basically falling apart due to Miyazaki’s retirement, and Studio Ponoc acting as Studio Ghibli 2.0, the Gkids lineup is a bit rocky. However, there are a few animated films coming out from the studio that are of note, with Okko’s Inn being the most noteworthy, as it is directed by famed former Studio Ghibli animator Kitaro Kosaka. Instead of following the traditionally deep and introspective stories that he helped create under Studio Ghibli, Kosaka aims Okko’s Inn straight at a younger generation (especially girls), keeping the little film adorably light and airy. Animated by Madhouse Productions, the film is amazingly animated, lovingly sweet, and follows a young girl through a series of tragedies that affects her life in enormous ways.

Young Okko (Seiran Kobayashi) survives a terrible car accident that claims the lives of both her parents, and is sent to live with her grandmother in the resort community of Hananoyu where she runs a little 5 room in called Harunoya. With her grandmother getting along in years, Okko is forced to act as a Jr. innkeeper and help her grandmother run Harunoya. To aid her in her efforts, Okko enlists the obnoxious help of a friendly ghost named Uriba, who was a childhood friend of her grandmother’s many many years ago. Soon she meets the snooty ghost Miyo, and to round out her supernatural friends is a demon ghost called Suzuki. The three of them help little Okko cope with life away from her parents and allow her to gain some self confidence to get on her with life. 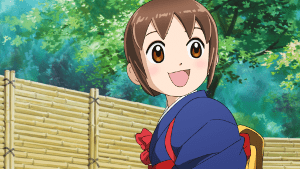 Okko’s Inn is a very straight forward movie, and not that complex. This is not a Miyazaki film or the standard Studio Ghibli fare. The film is sweet, straight forward, and more of a fun romp aimed at the younger generations. It has a lot of fun as Okko learns to deal with the different problems that the guests may bring with them and she actually befriends several of them as well, with those guests imparting their own friendship and wisdom on the young girl and slowly begins to help her get over her fears and nightmares of what happened to her parents.

Call me a softy for these warm animated films, but Okko’s Inn is absolutely adorable. It’s light, airy, fluffy, and doesn’t pretend to be anything else. Kosaka does a fantastic job at endearing Okko to you, and no matter what foibles she engages in, and what problems get in her way, you’re constantly rooting for the girl to come out on top. Even the annoying “frilly pink dressed” classmate ends up being won over by the seriously kind and sweet Okko. There’s a third act “twist” which kind of sucker punches you, but it’s done so naturally that you can’t help but smile while you wipe a tear from your eye. 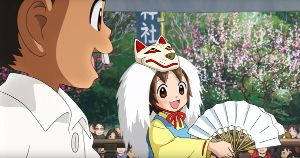 Animated by Madhouse Productions (one of the better animation departments, known best for The Girl Who Leapt Through Time), Okko’s Inn sports a very lush and vibrant transfer that is filled bright and shiny colors at every turn. The film is literally just bedazzled with pinks, blues, greens, browns, golds, and every color you can think of in heavily saturated amounts. Like the film is a sugar bomb of sweetness, the encode is just a color bomb, with fantastic hand drawn animation. The 1.77:1 framed film is lovingly hand drawn, with excellent delineation and no signs of any major artifacting whatsoever. There’s some minor color banding, but the film is artifact free otherwise, and supports some impressive details. The scene where Miyo and Uriba “fight” in the sky is one of the best scenes for showing off a wide array of detailed surfaces as they dance through the air. Overall, this is a fantastic looking Blu-ray and a treat to watch. 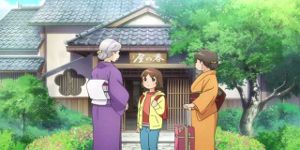 Shout Factory has supplied a 5.1 DTS-HD MA track in both English dub and the original Japanese audio dub, and both are perfectly fine for the film at hand. The track is a bit better in Japanese though, and I personally feel that unless you hate watching subtitles to listen to the track in its original track, as Seiran Kobayashi does a fantastic job with giving Okko a heart and soul. The English variant is perfeclty acceptable, but some of the secondary characters are a little less than convincing. The mix is strong and clean, and is typical for a dramatic film like this. Dialog is the main emphasis of the mix, but there are some really great moments when the surrounds light up, such as the dance scene, or the chase of Uriba and Miyo in the sky. LFE is mild but consistent, adding a light bit of help to the score as well as a few rumbles here and there, but otherwise is content to be laid back and conservative for most of the 96 minute run time.

Okko’s Inn is definitely aimed at the younger generation, but it’s a genuinely fun movie that can appeal to adults as well. My wife and I had a blast watching the hour and a half sugar bomb and have to say that it’s really nice to watch a new animated film from Gkids that doesn’t make you sob your heart out (I’m looking at you Maquia) or have some seriously depressing themes. Sure, the idea of death is present in the film, but the movie handles everything with such an upbeat and uplifting spirit that you can’t be brought down because of it. The Blu-ray by Shout Factory is very impressive with the audio and video specs, but is a bit lackluster in the extras department. Still, it’s a fun movie that definitely deserves a watch if you enjoy uplifting animated films.