My desktop system is Win 10 (currently at version 1903) with a MOTU Track16. Even years ago when I used ProTools a lot, this Track16 behaved oddly and was a hassle, whereas my old Digi002R had been trouble free.

Now I have graduated to REW newbie status, and the Track16 or its ASIO drivers are still behaving bizarrely. Plus I sold my ADAT mic pre and don't need all the ins and outs. So I am planning to sell the Track16 and start over with a simple 2in 2out interface.

-- Focusrite Scarlett is suggested as is Steinberg UR22 on the REW home page. Is there an 'affordable' interface like these (i.e. available new or used for $300 or less) that has an especially low noise floor?

-- If the noise floor on either/both of these is pretty good, do you prefer one to the other?

-- I looked at UR22 mk II (USB 2) and the newer UR22C (USB 3.1). Both very affordable. Should have good ASIO drivers since that's a Steinberg invention. Is one of these preferable in terms of convertor quality?

Intended use: measure noise of various audio circuits of my own design, observing noise levels and harmonics. Op amps and JFETs would be involved. And yes I'll measure my sound system while I'm at it as well. Also I'll do some waterfall plots of bass guitar notes--can't resist!

Thanks in advance for your suggestions.

I’m afraid you may be out of luck on this one. As you can see in this old post from Home Theater Shack, the soundcards that work best for REW are the simplest, which are also the cheapest. I doubt any one has significantly better noise characteristics compared to another. If your MOTU is acceptably quiet, I suggest using it for your noise projects and a separate simple interface for your REW measurements, if you can’t find one that meets your noise requirements.

P.S Welcome to the Forum!

I appreciate your reply and its recommendation for simplicity.

The link you sent includes the comment: "Anything that comes with an application like "Scarlett Mixcontrol" is trouble because the application controls what's going on inside the box, which can be a whole lotta stuff you don't want if you're taking measurements. I downloaded the Scarlett Mixcontrol app to take a look at it but it checks for hardware and wouldn't run, so I uninstalled it. My Motu 4Pre has these apps too. The problem is, unless you familiarize yourself with the correct mix control settings that work for REW, and hopefully can load a default preset, you can get weird unpredictable results for stuff going on in the box that you don't know about. " And that is exactly the problem with the Track16 I am now trying to use. Sometimes I can get a calibration. Close down, start up, change nothing and I can't get it to work. Bizarre.

It appears that with the Focusrite Scarlett one can actually deinstall the mix control app. I don't think the Steinberg UR22 has a mix control app, only the Mix...DAW button on the front. So these 2 are on my short list. Can't find anything simpler...I just wish I could find out which of these has the lowest noise floor!

I have a Scarlett 2i2 at the office and, while I haven't used it since March due to the current situation, I have never installed any software for it. It was plug and play. I primarily use it for monitoring, and have never tested the noise floor, but it's never been an issue, either.

At home I use a Universal Audio Arrow, which replaced an Apollo Twin. I love the UA stuff, but it's a little out of your desired price range, and it actually does require a couple different software apps to fully function, though I've never tried it without. The Apollo range is said to be quieter, but I prefer the bus power of the Arrow for my purposes (recording occasional VoiceOver, taking advantage of the Neve preamps, recording some demos, but primarily, again, monitoring stereo audio for video edits).
J

Scarlett 2i2...I have never installed any software for it
Click to expand...

Good to know. I am still undecided between the 2i2 and the UR22mkII. Between Craig's List and FB Marketplace there should be some good choices used and nearby (Raleigh, Durham, Chapel Hill NC area, a million people or so) but so far nothing appealing has showed up.

In the Focusrite interfaces, it seems that the 3rd gen is worthwhile for lower noise. Lots of 2nd gen versions for sale now,

Probably I'll check the 'Bay one more time and then be decisive. Thanks for your feedback.
J

Final Post
I chose the Focusrite Scarlett 2i2. At first I was nervous to see that the install loads drivers for Windows and a program called Focusrite Control; I was hoping not to have something like that. But it turned out not to include the intrusive mixing options of the MOTU Track16,

When I went through the Preferences/setup procedure I got a noise floor about -25dB better than I was getting with the Track16! Very satisfied. When I did the comparable loopback test in ARTA I got an even lower noise floor. Guess I need to watch my output and input gain settings. Here's the good news, below -110dB most of the way: 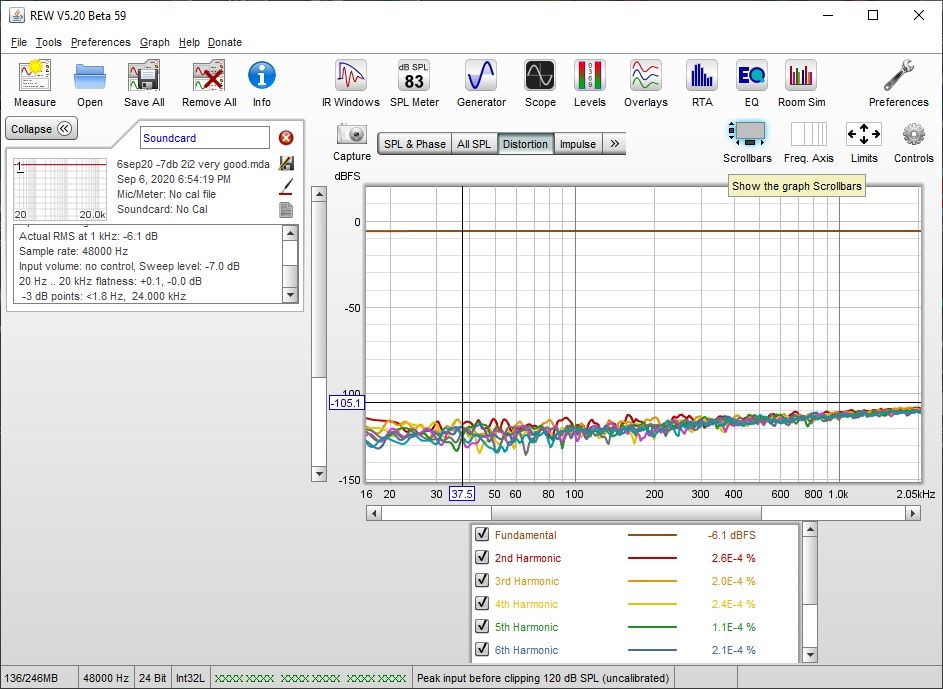 It is really nice to know there is a community of helpful experts for this amazing program.