My Entire High School Sinking into the Sea - Blu-ray Review

My Entire High School Sinking into the Sea 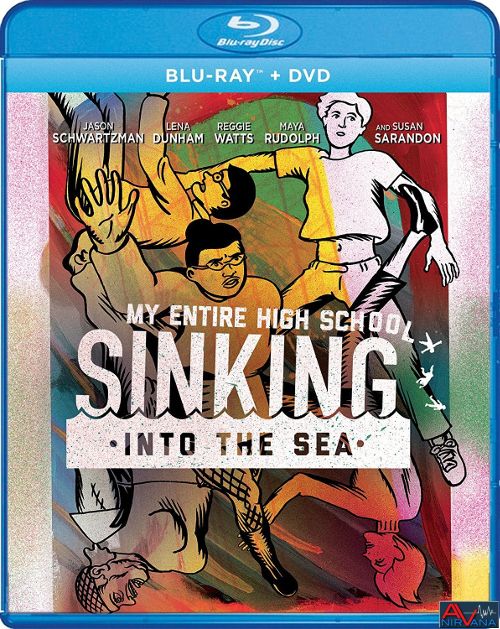 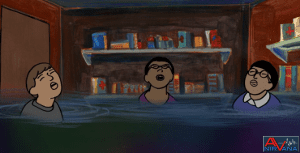 Movie
Probably one of the biggest facets of Shout Factory’s choice of films is when they come out of left field and choose something new and odd to put out. Dash Shaw’s feature film debut caught my attention when I saw that Shout Factory was releasing the film as I missed it in the local Indie theater that was showing it a few months back. Shaw is an interesting bird, being a sort of “indie graphic novelist”, and his visual styles are varied and strangely hypnotic. Although he does have the caveat of feeling like he’s still stuck in the early 2000 era “indie tween” sort of phase with his writing style. Something that has turned me off to him even though I love his wit and visual artistry. I knew going in that this would be a bit of an odd film, but wasn’t prepared for JUST how psychedelic and trippy the movie would actually end of being. Dash’s use of water colors and other strange artistic choices make for one of the most visually intriguing movie of the year, but it can sometimes get a bit too pseudo intellectual and hyperbolic for its own good.

The story is about as simple as could be, and only covers about 75 minutes, so there’s not a WHOLE lot to sum up. We’re introduced to young Dash (played by Jason Schwartzman) and his best friend Assaf (Reggie Watts) are starting their sophomore year at Tide High School (pay attention to the word Tide, as symbolism runs rampant throughout the film) where they run the local school newspaper. Hoping to bring in new blood to their failing paper, Assaf brings in Verti (Maya Rudolph) who ends up sort of splitting Assaf and Dash apart when Dash becomes jealous. Angry at his best friend’s “betrayal”, Dash writes up a scathing article in his paper and gets kicked out by Principal Grimm (Thomas Jay Ryan) as well as a mark on his permanent record. Trying to salvage his record, Dash sneaks into the record archives where he stumbles upon something disturbing. Tide High School failed the earth quake structural inspection, and Grimm forged the signature of the inspector to keep the school from closing.

Screaming the news at the top of his lungs, Dash is believed by no one, and soon sent off to detention where he and the “popular” girl, Mary (Lena Dunham) are forced to reside until the school suddenly suffers the unexpected. The school’s substructure cracks and sends the school sliding off of the cliff and into the sea below. Now, it’s not just Dash yelling lunacy, it’s the entire school running around like a chicken with its head cut off as Dash, Mary, Assuf, Verti and lunch lady Lorraine (Susan Sarandon) all try to make it to the top of the building and to safety as the building slowly sinks into the sea.

Dash Shaw crafts his film like he does his graphic novels. Lusciously rendered with a strangely raw art style, but also laying on the allegory and symbolism about as thick as Dairy Queen Blizzard. The entire film is a dripping in allegorical storytelling, with Dash giving us quite a bit of symbolism about High School dynamics, as well as what is going to happen to the students once they step outside of those doors in a few years. The same can be said for the kitschy dynamic between Assaf, Verti and Dash. It seems overly wordy at first, but through it all there is that raw and awkward social dynamic that high schoolers fall into, and it’s more a not so subtle wink and nod to how intellectual 16 year old kids THINK they are.

The art style is hypnotic and intentionally crude by design. Shaw’s drawings are rendered with a mixture of hand drawn work, soft water colors, and even paper cutouts that when blended together work rather well. The shock of the very odd drawings wear off after time, and by the second act they almost seem natural. As the film progresses and the students ascend the 4 levels of the drowning high school, the art gets more trippy, with colors running together more and more, giving it a much more psychedelic and harsher vibe.

Unfortunately with all the good comes the bad. Shaw has a hard time meshing the interpersonal drama with the students and the disaster setting. The movie works for the first 30 minutes or so, but past that it feels very dragged out and the 75 minute film, as short as it is, is just drawn out way too long. The real pull here seems to be Shaw’s unique visual style and his allegory laden undertones. With those taken out of the picture the film itself is actually really simple, and really solid only with a dark dark sense of humor (people getting munched by sharks, electrical shocks etc). I liked what I saw of it from the trailer, but I personally feel like this would have been better as a short instead of a feature film for Shaw’s work.

Rated PG-13 for some images of peril, sexual references and drug material

Shout Factory’s 2.39:1 framed AVC encode looks quite good, but be aware that the visual style employed by Director/Writer Dash Shaw is not proven to wild amounts of fine detail. However, the colors are simply magnificent, with brightly lit primaries, mixed with softer pastels and hot orange color tones that really pop off the screen. The hand drawn art and watercolors show no signs of artifacting, and really the only flaw I could find on the disc is some definite color banding that happens when the students and Lorraine are on their way up to the Senior level in the dark. It’s a good looking encode, and while not 100% eye candy, does extremely well in Hi-Def.

I was actually rather surprised to find ONLY a 5.1 DTS-HD MA track on the disc, as Shout Factory is known for almost always having a 2.0 DTS-HD MA track for night listening thrown in as well. I’m assuming that it was probably due to the fact that this is a Gkids film, and they most likely provided the audio track to Shout with specific instructions. The 5.1 mix is quite active, with a good sense of immersion when the school actually falls into the sea. Dialog is crisp and well centered up front, while the surrounds get a moderate amount of action in the form of screaming students, or crackling fires as they traverse their way through the school. LFE is solid and punchy, never really getting super loud or aggressive, but still always noticeable and present.

High School might enamor some viewers, and it really is a work of art visually, but I think it falls far short of the grand ambitions that Dash Shaw had with this project. I really did enjoy many parts of the insane film, but there are a lot of flaws and shortcomings that one has to swallow with the good here. Shout Factory did a great job bringing the crude animation to light on Blu-ray with a great looking encode, and the 5.1 audio mix is just as pleasing. While there’s not a whole of extras in regards to quantity, what is there is quite meaty and well worth listening to the commentary alone. Definitely something that should be checked out if the trailers interested you, but go in with tempered expectations.