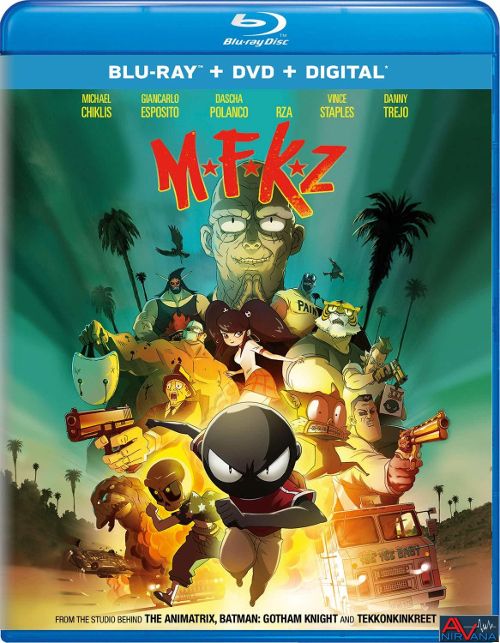 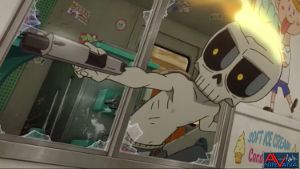 Movie
French animated cinema has long been a source of crazy, if not completely intense, sources of animated material. Tekkonkinkreet is an incredible film and one that I use to convert people over to French animated films (A Monster in Paris and Jack and the Cuckoo Clock Heart are another tow that are very accessible to the average animated viewer), but MFKZ glossed right under my radar when it initially arrived. The cover kind of turned me off (it has that sort of exploitation flavor to it that had me a bit leery), but that it came from Gkids as well as was associated with the people who produce the Animatrix AND Tekkoninkreet I was willing to give it a shot. Well, my initial gut reaction was right, as MFKZ (shortened from it’s international release for….well...you know) can only be described with one word. Bizarre. It’s a film that tries to be political, exploitative, and trendy all at once and fails spectacularly on all of them (In all reality, the movie is pretty tame, and the only people who will be really shocked over it are those who don’t expect the random four letter words and poop jokes).

Angelino (Kenn Michael) is a down and out blip on the radar who is just trying to make it in a dystopian society. He can’t keep a job, he can’t keep a girl, and his main friend is his roommate Vinz (Vince Staples), where they live in a cockroach infested slum. To set the backstory, Vinz and Angelino live in Dark Meat City (nicked named DMC for Depression, Murder and Crazy by the residents), a subsidy of “New California”, which is lorded over by Nazi like storm troopers, crime, violence, and general depression (which is probably where DMC came from), complete with some rather unorthodox characters. For example, Vinz is has a Ghost Rider (ish) appearance complete with flaming skull head, and everyone else just looks “off”in how they’re drawn.

When their apartment is raided by the Nazi looking stormtroopers, Vinz uses some of his latent “powers” to get them out of the apartment and into the wild. Helped out by their paranoid buddy Willy (Dino Andrade), and the angelic like Luna (Dasha Polanca) the group of misfits is on the run and escaping from a force that wants them for some less than nice reasons, catching them up in something that turns the nobodies directly into somebodies.

I’m not exactly sure WHAT MFKZ was trying to accomplish here. The film is definitely heavily dystopian, with the world portrayed as a visual slum, with fire, death, corruption, and open government fascism reigning supreme in this bizarre film. The visuals of dystopian society are all too familiar in the world of animation and film, but the PURPOSE is really what’s eluding me. Maybe there’s some societal implications going on in France that I’m not drawing a parallel with, but the end resulting film is one that is just a mishmash of fantasy dystopia along with Los Angelesesque gangster culture. The mix is a strange one, and to make matters worse, the script itself bounces all over the place. There’s no sense of cohesion or nuance with the plot, but rather it meanders over the place, sometimes focusing on interpersonal relationships, and then shoots over to esoteric takes on the world at large. Nothing ever truly is grasped as a focal point to the movie, and I’m left feeling like this was an experimental film rather than one that had a distinct message.

Rated R for bloody violence, language and some sexual content

The 2.39:1 framed AVC transfer is a very solid effort for Universal. The animation style is strange, but the details and colors imbued in the film are simply lovely. The dystopian world of Dark Meat City is both foreboding and grimy, but also colorful and full of life. The animation itself is well detailed, allowing us to see Vinz’s flaming skull head perfectly, as well as the graffiti covered streets of DMC. The animation is plagued by some banding that is pretty prevalent throughout the 95 minute run time, but the overall clarity and sharpness is very impressive. There’s a few jagged lines and some macroblocking here and there, but those are pretty fleeting, and except for the banding the image is very stable and clean.

It’s very rare that I find a new release film that has less than a 4/5 rating for audio, but MFKZ is one of the few titles that I’m forced to drop it down just a notch. It’s not that the film’s audio clarity is muffled, or the dynamics or vocals are weak, as it does all of those rather well. The bass line kicks in with a strong urban beat early on, and the vocals are all crisp and cleanly located up front. It comes from the gunfire and action sequences. While the score is blasting full throttle, and the LFE is pretty decent, the gunfire is just anemic and weak along with the fisticuffs. Gunshots that should ring out with authority just whimper out there, and crashes and hits that should shake the walls just leave you wondering “was that all there was?”. Outside of that suck out of low end for the action, the track itself is a very capable track that does everything asked of it well.

​
The one good thing that he film has going for it IS the strange dystopian visuals. The animation is spotless, and the bleak and grimy world that is portrayed on screen is almost hypnotic with it’s bleak beauty. However, that really can’t make up for a film that can’t seem to grasp what it wants to be, and instead just rides the crazy train all the way to the end. If I had to sum it up in one word again, it would be that MFKZ is just plain bizarre for the sake of being….well…..BIZARRE! If you’ve read any of my foreign animated film reviews before you know that I have a love for the strange and twisted world of off kilter animation, but this one I just couldn’t wrap my head around, and the enjoyability factor is pretty weak. The video and audio are solid, but the weird film and the lackluster extras on the disc leave me recommending most people just skip it.

Thanks for the review. I had high hopes for this one. Oh man..

I had some hopes for it too, but sadly it was a swing and a miss for myself

Other Equipment
Don't have any

Universal loads trailers from the net in front of all their discs, so it's literally dependent on what they're streaming at the time.

Other Equipment
Don't have any