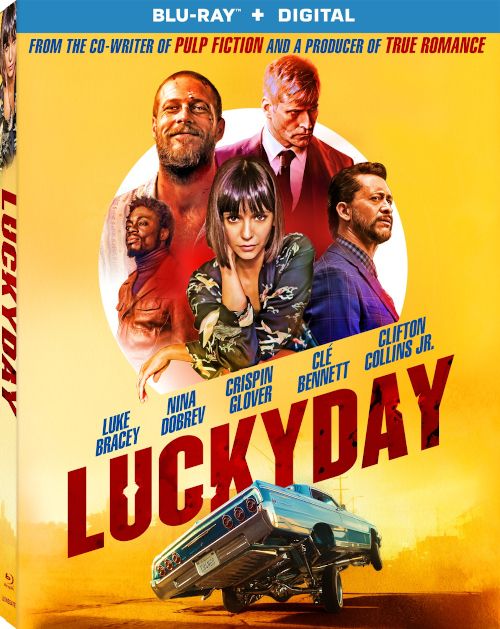 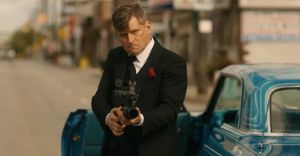 Movie
You know when the cover of a film is adorned with “from the producer of”, or “from the writer of” and other such various six ways from Kevin Bacon associations from popular movies that a film is really stretching for legitimacy. That’s usually the cue to walk out and walk away fast, but I was actually intrigued. Roger Avary IS known for co-writing Pulp Fiction with Tarantino, and he did direct the charming The Rule of Attraction, so I was willing to give it a go. Lucky Day was billed as a crime thriller, but it doesn’t take more than 15 or 20 minutes for you to realize that this is much more of an action comedy. A sort of blending of the insanity and cheeky humor of Fear and Loathing in Las Vegas, with the lunacy and blood soaked violence of 2016’s Free Fire, but with decidedly more dull results. It has a decent cast of actors, a solid writer, but somehow manages to miss the mark with humor, action, AND acting ability.

Red (Luke Bracey) has just been let out of the joint today. He went away for two years due to robbing a bank office and getting caught in the process. Now he’s paid his time and is getting out for good behavior so that he can come back to his lovely wife Chloe (Nina Dobrev) and daughter Beatrice (Ella Ryan Quinn). The thing is, he’s got a big target on his back now. Not only is his bitter parole officer, Ernesto Sanchez (Clifton Collins Jr.) breathing down his neck, but a French assassin named Luc (Crispin Glover) is hot on his trail. Luc’s brother was actually one of the other thieves in the botched bank job that put Red away, and sadly didn’t make it. Meaning that Luc is out for revenge for Red getting his brother killed (whether he actually did or not), and no one will stand in his way.

What happens next is a tongue in cheek action/comedy romp with Luc tearing up the streets of L.A., slaughtering everyone in his path on his way to finding Red. Interspersed between bouts of blood drenched violence we get to see Chloe’s art gallery sale, a little bit of friendly rivalry between Red and his former partner, and a little secret bit of cash that Red’s been hiding from the cops ever since the bank job went down, all leading up to a bloody finale where no one is left unscathed. 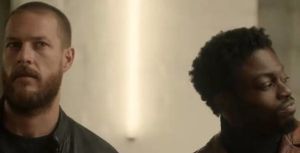 Lucky Day is a bizarre film, and I really mean a BIZARRE film at heart. At first it just seems like your every day DTV action caper, but after Luc comes on scene with his faux Inspector Clouseau accent (and of course the condom scene really crosses that line into the world of bizarre comedy) you can tell that this isn’t going to be a serious movie. As the film progresses the comedy becomes more and more apparent, until the movie culminates in a massive battle between Luc and everyone else in ways that almost feels like a 1950s cartoon.

Director/Writer Roger Avary tries his best to make the film lively and quirky, but his quirky jokes tend to fall flat, and become less “quirky” and more “cringey” as the movie progresses. He’s obsessed with giving a modern film a retro feel, like having Beatrice and her nanny playing a now defunct Nintendo 64, or a rotary phone, or old 90s lowriders. It’s a bizarre movie, and a bizarre choice of visuals. Still, while not everything works, we do have some good performances by Crispin Glover and David Hewlitt as Luc and Chloe’s pervy boss. While I normally like Crispin Glover’s crazy characters (he’s legendary for playing bizarre characters), it’s really David Hewlett who steals the show. He amps up his annoying Rodney McKay character from Stargate and pads it out with a sort of sleazy nastiness that makes him enjoyably repulsive for the an already repulsive film. I did get a chuckle out of martial artist Mark Dracascos making an appearance (before getting killed with little fan fare), but overall, it’s a strange mixed bag for performances.

Rated R for bloody violence, language throughout, and sexual content

Lucky Day is blatantly absent of any information regarding it’s transfer online and through my contacts, but it seems to be a digital production, and I would bet (if I was a betting man) that it was finished at 2K for the Blu-ray/DVD release. The 2.40:1 framed AVC image is clean and clear for the most part, with a yellowed tinge to the color grading. This doesn’t detract from an otherwise excellent display of facial details or skin tones, but does make some of the daylight shots look hazy in the sunlight, and the blacks suffer just a tad from being yellowed out. Shadow detail is solid across the board, and general details are more than appealing. It’s not the greatest transfer, but it’s fairly artifact free (I noticed some color banding in darker scenes) and seems to be intentionally stylized by Roger Avary.

The single 5.1 DTS-HD MA track found on the disc fares the same fate as the video score does. It’s good, checks off all the proper check boxes, but doesn’t try too hard to be anything standout. Dialog is clean and centered in the front of the room, while the mains take advantage of the urban action film by spreading out and panning as Luc shoots his way through the city and tracks down Red. Surrounds are generally active, but only minimally so. There’s some uptick in activity when the action picks up, but a lot of the time I noticed that the surrounds weren’t really outputting much information. Bass is tight and punchy, never too over aggressive, but certainly flexes its muscles during some of the action scenes.

Lucky Day is an interesting project by the writer one of the most classic Tarantino movies of all time, but it’s a failed attempt most of the time. The quirky and Fear and Loathing in Las Vegas style of storytelling doesn’t always pay off. The jokes are kind of cringey, and the usually entertaining Crispin Glover is flat and bland with his faux French accent. I really wanted to like the movie considering the pedigree of the writer, but sadly his directorial abilities are not nearly as good as his writing is. The Blu-ray’s audio and video are more than capable, but the movie itself and the distinct lack of any real extras outside of a few trailers leave this package wanting. Rental at best in my opinion.

Thanks for the review. Will skip this one thou..