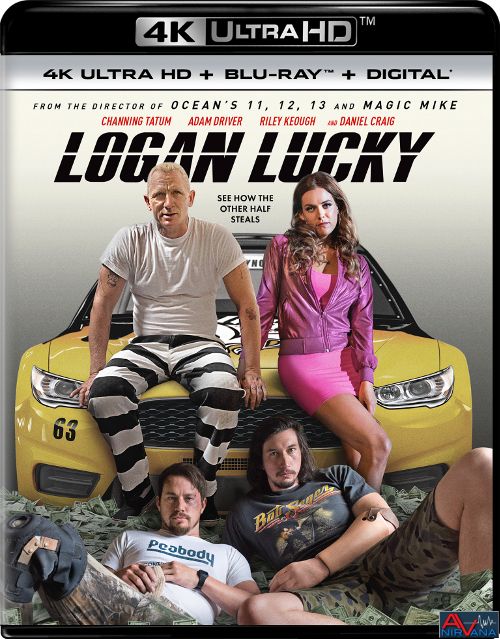 Movie
Steven Soderbergh is no stranger to the heist movie, as he’s most famously known for the Ocean’s trilogy of heist films starring Clooney and crew. However, the man has a varied and widely diverse career, ranging from straight up spy/action films (Haywire), comedic whistle blowing films (The Informant), all the way down the pipe to films about male exotic dancers (Magic Mike and its sequel), so I wasn’t exactly sure WHAT to expect when I saw the trailer for Logan Lucky a few months back. It looked like a fun heist movie, but with Soderbergh’s habit of changing things up on the viewer I wasn’t exactly counting my plot chickens before they were hatched. This time though, it seems like the director wanted to remix an old classic, instead kind of remaking Oceans 11 in west Virginia, substituting hillbilly stupidity by the sleek charisma and charm of the Oceans movies. Despite being almost a blow for blow remake of those films (at least in style and execution), Logan Lucky is a charmer of a film, allowing the redneck sensibilities and sly humor that Soderbergh is known for permeate the experience and leave the audience chuckling as they leave the film.

Jimmy Logan (Channing Tatum) is a divorced father of one little girl, and stuck working his job in the mines of West Virginia. His ex wife, Bobbie Jo Chapman (Katie Holmes), married up the ladder to an annoying (but rich) car dealership owner and poor Jimmy is stuck just hanging around trying to see his daughter on good days. His younger brother, Clyde (Adam Driver) is a maimed combat vet, having lost his left arm in Afghanistan and wallowing in mediocrity running a little bar called “the Duck Tape”. Depressed, realizing that their lives are going nowhere, the two boys hatch up a hair brained hillbilly idea that they’re going to rob the Nascar track a few miles away. It’s the perfect job, as Jimmy just got laid off from the construction crew that was working just around the track so he knows the ins and the outs of the vault, and with so many people coming from miles and miles away to see the races it is just STUFFED with cash. The only thing is, they don’t have a way to get INTO said vault.

This is where Joe Bang (Daniel Craig) comes in. A local safe cracking hero, he’s the logical man for the job, but there’s the slight problem of him being in jail for the next 5 months after a bank robbery gone wrong. Well, that’s no problem for a couple of hicks with bright ideas, so Jimmy and Clyde cook up a scheme to break Joe Bang out of jail, get into the vault with millions in cash, hide the money, AND get Joe Bang back into jail with just the help of a couple relatives and the Logan’s sister, Mellie (Riley Keough). Simple? Right?

Logan Lucky takes one of the oldest stories in the book, and actually does it REALLY well. You’d think that basically following the same pattern that Oceans 11 formulated would be derivative and boring, but Soderbergh infuses the film with fresh new characters that are so completely different than the smooth talking casino robbers that you can’t help but love them. Instead of suave, debonair men making plans and talking like a greased nickel, the film’s dialog is full of red neck hillbilly talk (sorry, I grew up in the south, so I speak bonafide hillbilly fluently) and sly humor disguised as blatant stupidity. Channing Tatum does well as the “smartest” of the crew, but each and every one of them has a blast with their roles. Daniel Craig is in full form as the slightly off the rails Joe Bang, but Adam Driver just steals the show with is slow as molasses Clyde.

Not only that we get a whole host of cameos ranging from Hillary Swank as a straight laced FBI agent, to Seth McFarlane hamming it up in a near unrecognizable getup (it wasn’t until he had his nose broken and was using that nasaly voice that I caught it was him). The film just WORKS even though you know every beat of the film due to these people. They’re everyday, ordinary seeming folks, with ordinary problems, and WAAAAAAAAAAAAAAAAAAAAAAAAAYYYY too much relatability for those of us who grew up down south of the Mason Dixon line for comfort. It’s just hammy, fun and fully hilarious to watch this Hillbilly heist go down.

Rated PG-13 for language and some crude comments

The 4K mastered film makes a solid jump up from an already demo worthy Blu-ray through the use of more detailed colors and textures (thanks the use of HDR and the extra lines of resolution). SUPPOSEDLY the film was finished with HDR and Dolby Vision theatrically, but only HDR is available on this disc (which isn’t a big deal, as the differences between the two seem to be very slight from my personal experience) for us to enjoy. The film delivers a moderate jump up in visual clarity and details from the Blu-ray, but the real benefit comes from the visceral pop from the already bright colors thanks to HDR. Also, if you look real closely at the cars during the race, or the brown stone and cement walls underground, you can just a little bit more noticeable detail to the naked eye. It’s not a MASSIVE jump, but a decent upgrade over the 4K nonetheless.

Lucky Logan sports a fantastic sounding 5.1 DTS-HD MA track (that is carried equally on both the 4K UHD and the Blu-ray, meaning this write-up will be identical across both reviews) that really is packed with material to enjoy. The film’s sound mixing is fully of energy and pep, shifting between the hustle and bustle of the Duck Tape, to the roar and rumble of the track at a moment’s notice. The under ground tunnel echos off the walls and the thunderous roar of a bulldozer grinding through the tunnels adds some serious low end activity. While the movie is wildly kinetic and full of surround support, the LFE is NOT overcooked and used everywhere. It’s mild when needed, and is used to support heavier duty machinery rather than just pound away with every scene like a drummer out of control. It’s subtle, but effective, and the entire track just feels EXTREMELY well balanced as a result. Dialog is crisp and clean, and the front sound stage spacious enough to really impress. You really can’t get much better for a 5.1 mix.
.

Logan Lucky doesn’t blaze any new trails in the heist genre, but it’s a relatable film that just has fun with the characters and uses subtle humor and bumbling charm to make the film appeal to the viewers. I have to admit that I’ve been REALLY impressed with Channing Tatum after his career turnaround from being dumb pretty boy. He’s got some acting chops and actually been getting more and more grounded with each and every performance. His side performances have actually been some of the best I’ve seen, but his leading man roles have been getting better and better as well. Adam Driver once again proves that he doesn’t have to be a hipster douche to play a good character, and systematically steals the show once again. The 4K UHD is just as impeccable as the Blu-ray, but also carrying over the weak extras as well. Definitely worth a good, fun, watch for those of you who love a heist film.

I'm all over this one, Mike. Never heard of it (to be honest) but definitely am adding it to my watch list!

Gotta say this movie was more hype than happening. Found it to be no more than a casual rental. Surprisingly with this cast I was expecting a more fast pace film, the trailers were misleading. That is not to say it was a bad or porely scripted film. Regret shelling out for the 4K on this film.

bummer. Sorry it wasn't as enjoyable as you were expecting Phillip

Michael Scott said:
bummer. Sorry it wasn't as enjoyable as you were expecting Phillip
Click to expand...

I think that sometimes trailers misportray a film. Whether this is sometimes done on purpose by the studios to pull in dollars or just poorly represented.
Then there is always each individuals personal taste in film genra.
It always just seems more bitter when you feel like you were lead to expect one thing and it is not what it is. Just wanna repeat it was a quality audio, video and script. Just a slower pace, not a action paced heist film.

yeah, it's one of the reasons' I don't watch trailers for most films anymore except super big ones like Star Wars: VIII etc. so many of them either spoil the whole movie, or just just misrepresent it (Atomic Blonde was a symptom of the latter choice)
You must log in or register to reply here.
Share:
Facebook Twitter Reddit Pinterest Tumblr WhatsApp Email Link