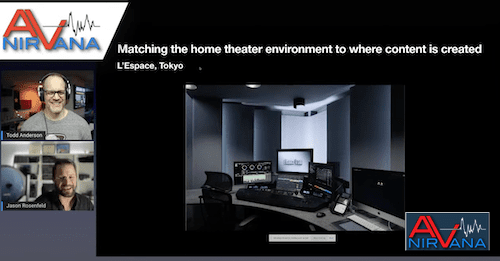 (November 15, 2021) Hey there, AV NIRVANA! We're hosting a live chat on Twitter, Facebook, and YouTube with Jason Rosenfeld (President & Founder of Scenic Labs) on Nov 17 at 1PM EST to discuss Bias Lighting, your room's environment, and how the visual system plays a role in the perception of image quality. Please swing by, watch, and ask a question! If anything, you'll learn the whys and hows behind boosting your TV viewing experience!

Or, head to our Twitter page and watch (https://lnkd.in/dd9p5iza).

Many thanks to Jason for joining me yesterday. He led us DEEP into the jungle of Bias Lighting with lots of rich detail about how and why it works. He showed us measurable proof that not all bias lighting is the same. If you want to learn a lot about visual science and the science behind light, kick back and enjoy!

Thank you!! Excellent presentation from you both. I learned a lot from watching this. I even watched it live from work as much as I could then later from home (don't say a word lol). I am loving my MK2 with my plasma. Jason Rosenfeld is a great guy with excellent customer service and products.

Thanks for dropping in, Ariel! And I'm glad you took the plunge and bought an MK2 kit. The impact of balanced and properly dimmed bias lighting is a game-changer.

The amount of detail Jason provided was above and beyond what I was hoping to get. He's loaded with knowledge! I think his ability to accurately describe tint and illustrate it with visual aides was great – he did a way better job than my THX calibration instructor! x

1)Bias Lighting has a profound impact on how our eyes view images on a TV (which was established in our review)
2) You can use Bias Lighting on walls that aren't grey!
3)Educate yourself before you buy a lighting kit. You might end up buying a product that has spectral properties that actually make your viewing experience worse!

Todd I can tell you the MK2 is in a different league then the other cheap LED's. This one is pure white even with my light beige color. The cheaper lights didn't really stand out as white. With the MK2 there is a white halo around it and with the others there is a halo but the light seems to spread out more and is very thin if I make sense.
I wanted to ask you about the part of the presentation where the tv out of the box settings are set to Warm. I currently have it at Warm2. Does this mean now with the MK2 lights it should be set to Standard because of the lights having D65? Maybe I misunderstood.

Yeah, it really varies by manufacturer. Traditionally, most manufacturers ship TVs in a torch mode where white's have a blue push to make them look really crisp. This is done primarily because when a TV goes on display in a big box store, manufacturers want it to stand out... AND the lighting in those stores is particularly harsh with light that has a blue push.

I noted that Jason described a warm push... but he also referenced "torch mode". I'm not sure what his warm comment was referring to.

Your TV setting should be the one that most closely approximates a calibration with accurate D65 white. I believe Samsung has a "Movie Mode," that's the one I'd start with. It might make whites look a little softer or more yellow. But that's what you want. After a day or so, your eyes will adjust.

The most import thing to look for is proper skin tones. That's where something like the spears and munsil disc comes in handy. It has reference skin tone images that you can look at... perhaps you can find something on YouTube that is similar. If skin tones look healthy with these reference images, then your TV is probably in the right mode.

Excellent video Todd. I just placed an order for the 6 meter one from amazon.com.

Thanks! Great choice on the purchase... for a minimal amount of invest, you get a big return. Don't forget to dim the brightness to approx 10% of your screens peak brightness. You'll be rewarded!

Todd Anderson said:
Thanks! Great choice on the purchase... for a minimal amount of invest, you get a big return. Don't forget to dim the brightness to approx 10% of your screens peak brightness. You'll be rewarded!
Click to expand...

Thanks, my color purity is supposedly great on my LG, but the blacks are not. Would i use my light meter on a white screen and in a dark room, and then turn the TV off and measure the LEDs reflection off of the off white part of my wall? I am assuming there is a dimmer on the unit...

I got mine from Amazon, but they did not have the dimmer so I am going to order one.

The install went pretty easily for me to do by myself (except for the lack of room I had to get behind the tv, but that is my fault ). It looks great...just needs to be dimmed.