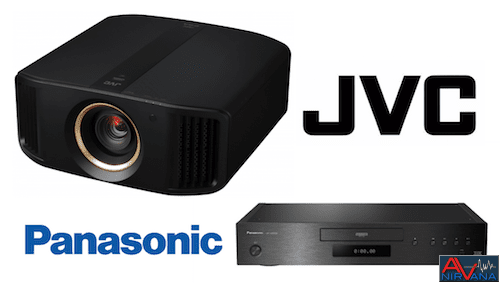 (March 20, 2019) JVC and Panasonic have announced a new collaborative venture to make projection-based HDR better. Unlike 4K TVs, most 4K projectors paired with decent-sized screens struggle to deliver the necessary brightness for a top-notch HDR experience. And brightness demands can vary from disc to disc, resulting in a picture controls guessing game that can be rather frustrating.

"The Panasonic DP-UB9000 has been widely praised as the gold standard among Ultra HD Blu-ray players, and its HDR Optimizer works beautifully with our projectors to deliver stunning HDR images," said Fred Zecha, General Manager, Custom Installation Sales, JVCKENWOOD USA Corporation. "By including custom color profiles specifically designed for the Panasonic player, performance is further improved by optimizing HDR content for the player/projector pairing and the result is truly cinema-quality images."

This is cool. Wish I could afford the JVC 4K projectors and the $1k price tag of this Panasonic. Instead, right now I've got the previous generation entry-level JVC and the Panny UB820, at less than half the cost. And they do a good job together too. But it's nice to see some collaboration between manufacturers.

Are you using the UB820's tone mapping settings? Have you played played around with turning them on and off?

Well I haven't been running the SDR BT2020 conversion on the Panny. I have not yet calibrated the projector for that - I've only calibrated for Rec 709 and a 2.2 gamma. The recommendation has been to have a BT2020 calibrated mode with a gamma of 2.4 to run the tone mapping with on the player.

But it seems the RS440 I own doesn't have a BT2020 mode - that requires a color filter that only the RS540 and RS640 have. So I'm not quite sure how to proceed. I could get calibration test signals for BT2020 and try to calibrate as close as possible to that standard. I just haven't gotten around to it and frankly I'm pretty new to this video calibration thing.

However, I have watched a couple movies with the Panny set to HDR output, and my projector does have an HDR mode that it goes to automatically when it detects HDR. That looks quite good indeed. I haven't played with the HDR optimizer in that mode (hard to do that when others are watching the movie with you), but as it happens I'll probably experiment with that tonight.

Honestly, the most important factor is how the PJ translates HDR. The newer crop of projectors have built-in technologies to help with tone mapping... but the older generations can struggle at times.

Okay, I will clarify. Kris Deering of Sound & Vision has tested the UB820 with JVC projectors extensively, and projectors in general. His recommendation is that projectors have an SDR BT2020 calibration with gamma of 2.4, and that the UB820 be set to its SDR/BT2020 output. My problem is going to be getting a calibration for BT2020. Obviously the projector can't do BT2020, or even full DCI P3, so the question I have to answer is how to calibrate it to utilize as much of P3 as it can do. As I'm quite new to video calibration, I don't know how to accomplish it, or even if it's worth doing. The UB820 does have an SDR Rec709 output as well, so I could use that with my Rec709 calibration and at least still get the HDR-to-SDR tone mapping benefits.

I think if you get it close (say, calibrate to rec709)... and then put the ub820 into a specific tone mapping setting to suit your situation, that you'll likely have a really good experience. Obviously, calibrating to bt2020 is ideal. But equipment needed to accurately do that is expensive (unless you have it on hand).

If your eyes are telling you that what you have is pretty good, you're on the right path!

I have Chromapure and the i1Display Pro meter. What I don't have are patterns for BT2020, but those can be had at minimal cost. As far as I know, calibrating to BT2020 is much the same as calibrating to Rec709, but I don't really know how to deal with a display that can't really achieve the standard I'm calibrating to. How would I know I've gotten everything it's capable of out of it?

I will be researching this more for sure. But I will also revisit using the UB820 set to output SDR Rec709 with my projector's Rec709 calibration. Then I can play with the Optimizer, or whatever it is they call the tone mapping when the output of the player is SDR.
J

@bkeeler10 I gave it me best shot with JVc autocal, custom hdr gamma curves and tonemaping on a predessor to your player. Definitely helped a lot, but realized much much more to learn, an investment would need to be made in money and time and the biggest thing was having no idea how good the best result might be. I came to the conclusion that it was worth knowing that before investing more time and possibly wasting money and hired @Chad B who calibrated for both SDR and HDR. Some of the best money I ever spent. Pq blew me away.

So my final conclusion was that I could spend my time and money learning but I will never get to the level of knowledge and the fine blend of science and experience an enthusiastic professional such as Chad possesses. And while honing new skills to the best of my limited ability I’d miss out on the best pq. I’m on Chad’s list for a tune up when he comes my way again.

I in no way mean to discourage anyone interested in developing their skills and knowledge in our mutual hobby. And I too find great enjoyment in doing that same thing. But I wanted to share this story as just one persons view and food for thought.

I hear ya there. Very tempting to hire a guy like Chad to do this. The only reason I have heartburn over it is that it needs to be redone somewhat frequently with a projector, which means multiple outlays of money. I have really been hoping to learn the craft myself, but I confess it is rather daunting. And I've already spent probably two calibrations' worth of money on equipment to do it myself.

People like you, who have invested time and money learning about it and experimenting with it and still get blown away by a calibration from a professional, make the prospect very tempting indeed.

Just curious, what’s a decent calibration job cost? I recently purchased a JVC NX5 and Pani 820. Also where abouts do you go about to find a competent calibrator? Let’s put it this way, focus, zoom and alignment with my screen is about all I can comprehend.

Let your projector get a good 100 hours on it first. Performance changes as the bulb initially ages. Do it to early and you’re throwing your cash away.

Initially, just put your projector into movie or cinema mode. That gets white really close to D65 (which will look somewhat yellowish to your eye... don’t let your eye deceive you!). Use Spears and Munsil if you have it. That will get your JVC into really good operational territory. Chad B has a very solid rep among JVC owners. http://www.hdtvbychadb.com/home-1.html

Nice gear you’ve got there @phillihp23

I usually tell people to get 200 hours or more on their projectors before calling.

Chad B is a very good choice.

The best calibrator list, IMO of course, is at RTINGS.

In follow up to my calibration question, can anyone recommend someone on the east Coast?

This is what one of the local company's is offering:
Pricing
Direct view sets: $400
Rear/Front Projectors: $500
Optional Color Gamut calibration (if available in display): $100
External Video Processor calibration: $400

Discounts are available if more than one set is calibrated during the same visit. All pricing includes customized reports showing gray scale tracking pre and post calibration.

Equipment used
Work we do NOT perform
Models we do NOT work on, since they can't be calibrated accurately

Also wondering if I should have gone with the UB9000 instead of UB820 in light of this.

phillihp23 said:
In follow up to my calibration question, can anyone recommend someone on the east Coast?

This is what one of the local company's is offering:
Pricing
Direct view sets: $400
Rear/Front Projectors: $500
Optional Color Gamut calibration (if available in display): $100
External Video Processor calibration: $400

Discounts are available if more than one set is calibrated during the same visit. All pricing includes customized reports showing gray scale tracking pre and post calibration.

Equipment used
Work we do NOT perform
Models we do NOT work on, since they can't be calibrated accurately

Look at the RTINGS link I gave for calibrators out on the east coast.

As for that local company, I'd steer clear. That gear is pretty outdated.

mechman said:
Look at the RTINGS link I gave for calibrators out on the east coast.

As for that local company, I'd steer clear. That gear is pretty outdated.
Click to expand...

That company was on RTINGS link LoL! Also to just add more insult to myself....I stated calibrators on the East Coast....showing my true origins there....I live on the West Coast for the last decade plus

How about this one @mechman His site and presentation on the site seems way more professional and qualified. How does his equipment look? Also any of you ever look into this Lumagen device?

Video Calibration
ISF Certified. All Formats. The Latest Tools.
Proper setup and calibration of your video image is probably one of the most important things you can do to ensure you are getting the most of your video playback system. From the most simple adjustment of basic settings to in depth analysis and LUT generation, Deep Dive AV will make sure your video looks its best every time.

I am a Level 2 ISF certified calibrator and work the with the latest tools and equipment to calibrate any display type. Tools in use include:
I also do full setup/calibration of Lumagen Radiance video processors (SDR and HDR), eeColor LUT boxes and custom HDR tone map generation for JVC projectors. Clients are given a full pre and post calibration report for their records at completion of work.

That one looks a lot better! Kris writes for Sound & Vision.

Lumagen processors are expensive. I remember reviewing a DVDO processor at the old site. Lumagen would never send me anything. And none of this is to say that they aren't worth it. Some people think that they are.

Hey... east coast vs west coast... there is only one letter difference there.