Justice League vs. the Fatal Five 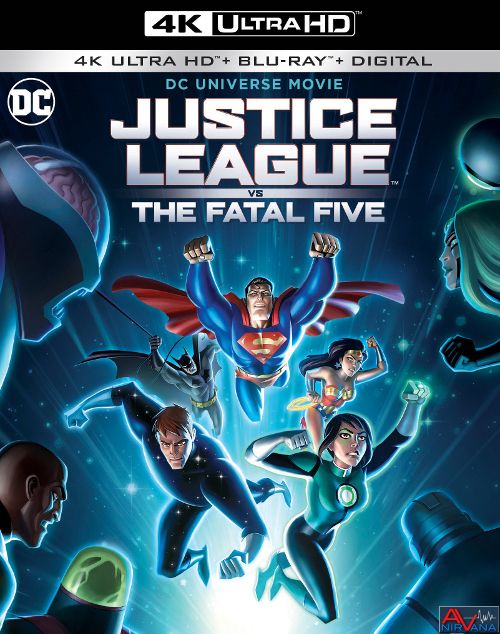 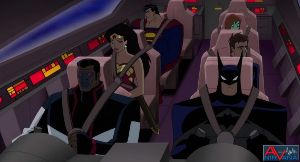 Movie
Sam Liu is king of the DC animated films recently. Even though he didn’t start out with the animated lineup (which started with 2007’s Superman Doomsday), he has continued to be one of THE go to directors for the rest of the series. However, Liu tends to stick to the New 52 reboot animated films more than the Bruce Timm style movies, but in this case we have an exception with Justice League vs. the Fatal Five. The 34th film in the last 12 years, Fatal Five manages to be an entertaining (if not dark for a Bruce Timm film) experience that fuses two story lines together in one movie. The first dealing with the Justice League encountering the most powerful villains from the world’s future, as well as a personal origins story for Jessica Cruz, who happens to be one of the newest Green Lanterns in the DC comics lineup (she appeared in 2014). The hybridization of the two stories is a bit problematic, but the film itself is a lot of fun and just chock full of action.

The film opens up with three members of the Fatal Five (Tharok, Persuader and Mano) laying siege to Legion of Super Heroes (Star Boy, Saturn Girl, Braniac 5) in the future, only to have them steal a time ship and jump back in time with Star Boy in tow. Landing on earth back in the 21st century, the three being to lay waste to Metropolis looking for something. Star Boy has lost the last dose of his psychiatric meds (he needs said medication to stay sane) and begins to forget his mission, only to get picked up by Batman (voiced by the legendary Kevin Conroy) and locked up in Arkham Asylum for being delusional. While Star Boy is locked up in the hoosegow, the three members of the Fatal Five seem to be looking for someone known as “limelight”, tearing through Metropolis in an effort to find this being. Batman, Mr. Terrific, Superman and the rest of the main Justice League team try and stop them, but it seems they have found this “limelight”.

Limelight turns out to be Jessica Cruz, the newest member of the Justice League and the newest member of the Green Lantern corp as well. Jessica is not your average superhero though, as she suffers from crippling doubt and PTSD stemming from an encounter from her childhood where she saw her friends murdered by a criminal. Barely able to make it out of bed in the morning, let alone battle evil with the power of the ring, Jessica is an easy target for the 3 Fatal Five members looking to use her power to free the most powerful two members from imprisonment from the Green Lantern Corp themselves. 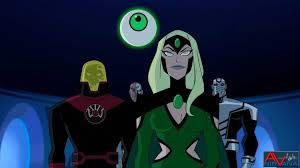 As you can tell from the previous two paragraphs, the story is kind of split into two sections. The first two thirds of the film deals with Star Boy and the Justice League fighting the Fatal Five members, and it’s quite a lot of fun. We get to see some of the more non traditional superheros and villains with this story, allowing for some great battles. Usually we see The Flash, the regular Green Lantern members and Cyborg or several others, but Mr. Terrific and Jessica make for a nice touch. The third act is really a Jessica Cruz story though, and deals with her coming to grips with her own traumatic past and how she deals with it to become one of the most powerful Lanterns. The mixing of the two, or the separating of the two stories I should say, is a bit awkward at times, but it works out in the end.

One of the biggest appeals to the film is that it combines Sam Liu’s dark direction with Bruce Timm’s more traditional DC animation and it is quite a lot of fun. The violence is actually up there with the top end of the New 52 series, and sometimes even surpasses them. The battles are copious, and the action is quite brutal and bloody (comparatively, this isn’t Constantine: City of Demons or anything) . Kevin Conroy as Batman is always a plus, and the movie moves quickly with very little down town. It’s not perfect, but it certainly is fun. 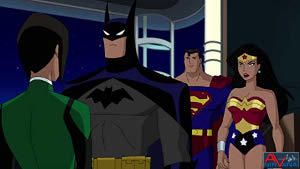 Usually I’ m VERY leery of the DC animated films from Warner in 4K UHD, as they tend to end up being no better than their Blu-ray counterparts. Except for Constantine: City of Demons they all have been underwhelming to say the least. HOWEVER, it seems that Warner has learned from their mistakes and done a great job with the 4K UHD disc for Justice League vs. the Fatal Five. The animation details offer a moderate upgrade over the 1080p Blu-ray (the simplistic design of the Bruce Timm animation doesn’t really leave much room TO improve that much), but the real benefits come from the use of HDR (according to the press release this was supposed to have Dolby Vision, but it appears to be an HDR10 release only) and the expanded colors. The already great looking colors are even more vivid and vibrant here, with the greens of the Green Lantern battles, and the bright reds of Mano’s molten hands literally popping off the screen. One other thing to make not of is that the black levels look deeper and inkier, and the 4K disc gets rid of most of the banding that is present on the Blu-ray. It’s a great looking disc, and welcome surprise to actually be able to recommend the 4K UHD disc over the Blu-ray for once when it comes to the animated DC films.

The 5.1 DTS-HD MA track is a really winner as well (the original press release stated that this would get a Dolby Atmos track, but like several of the previous animated films from the DC WB universe it was scrapped at the last minute). I would have preferred the Atmos track naturally, but the 5.1 DTS-HD MA mix is no slouch either. The constant battles between the Justice League and the Fatal Five members makes fore non stop action, and all the energy pulses, crushing impacts and battle cries come through with crisp clarity and heavy weight. LFE is constant and engaging, adding weight to the battle impacts, and rippling through the score. Dialog is clean and clearly locked up front and the surrounds are also never silent thanks to the copious battles. 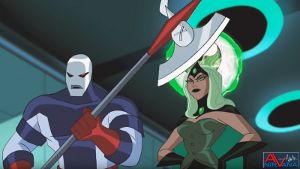 • Battling the Invisible Menace (Featurette)– This featurette will explore the nuanced hero as many characters must deal with the everyday feelings of anxiety, depression, and other incapacitating emotions that we all must battle and overcome.
• Justice League vs. Fatal Five: Unity of Hero (Featurette) – A look at how the pantheon of DC heroes has never been more diverse and inclusive, as writers and artists break boundaries and smash stereotypes.
• Audio Commentary – Bruce Timm, Sam Liu, Jim Krieg and Eric Carrasco share their thoughts and insights on Justice League vs. The Fatal Five.
• A Sneak Peek at the next DC Universe Movie, Batman: Hush – An advance look at the next animated film in the popular DC Universe Movies collection.
• Sneak Peek Revisited: A Preview of Justice League Dark – John Constantine leads a group of misfit characters that use magic to vanquish their opponents. This is the dark version of The Justice League taking on the malevolent forces that go beyond our plane of existence.
• Sneak Peek Revisited: A Preview of Justice League vs. Teen Titans – A glimpse into the characters known as the Teen Titans.
• From the DC Vault: Justice League Unlimited, "Far From Home"
• From the DC Vault: Legion of Superheroes, "Man of Tomorrow"
• Optional English and French subtitles for the main feature

​
Justice League vs. the Fatal Five is a welcome change of pace from the New 52 story lines that have been the mainstay of the Warner DC animated films the last several years. Bruce Timm’s work in the DC universe has always been my favorite, and it’s fantastic to hear Kevin Conroy as Batman once again. The film really is a bit harder than most of Bruce Timm’s work (he tends to be more light hearted than the deep dark depressive nature of the New 52), and really pushes the PG-13 rating in terms of violence. The hybriding of the Justice League story line with the Jessica Cruz one is a bit strange and seemingly ad odds with itself at times, but it is still more than fun enough as a stand alone movie. The 4K UHD disc is also one of the VERY few Warner DC animated films that I can say actually shows dramatic improvement over the Blu-ray, and I give the whole package a good thumbs up.