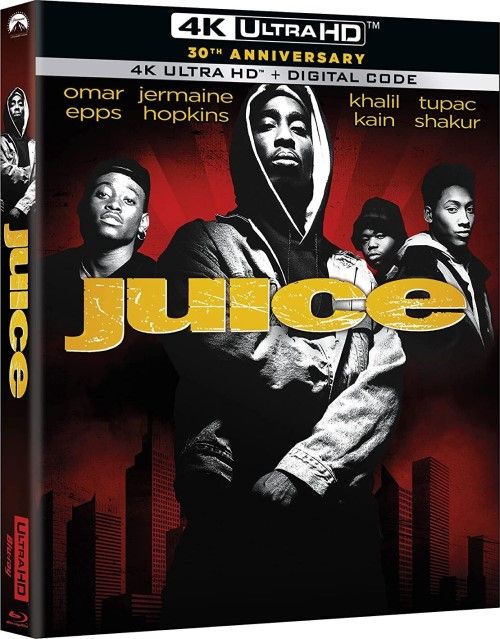 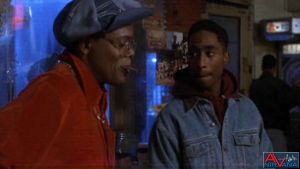 Movie
I honestly felt that Juice had just come out on Blu-ray only 1-2 years ago. Then I looked at my review list and realized that it was FIVE years ago. How time flies. I guess it's appropriate for Paramount to release the film in 4K UHD then for it's 30th anniversary.

“Juice” is basically an older 80s/90s term for power and respect on the street. Otherwise known as street cred, or street power, usually at the point of a gun or a knife. Being the cinematographer for Spike Lee director Ernest Dickenson crashed onto the scene with a stunning debut 25 years ago in the form of Juice, a powerful drama about 4 kids growing up in the hood, but soon falling apart as violence and weapons enter their young world. Back in 1992 it was a slam dunk and luckily starred a very young Omar Epps and the star power of Tupac himself four short years before he died. I was a young teen at the time and remember watching it with my friends and being in awe at the rough and tumble tale of cautionary filmmaking, but after rewatching after at LEAST 15 years since the last viewing, some of the 90s elements date the movie quite a bit. There’s that underlying message of the fleeting lusts of the street, but the heavy 90s “Salt n’ Peppa” style music and the old 90s gangsta lingo makes it a little harder to take seriously than it really should be.

Paramount hasn’t been very up to date with catalog titles lately, but when they do release one, it’s usually something rather special. And while I find the movie a little bit dated, Juice is one of those films that has a very strong following and for good reason. It was one of the great films of the 90s that took a hard look at growing up that crime ridden culture that wasn’t an action movie, nor a sappy imagining of the era. The film follows Q (Omar Epps), Bishop (Tupac Shakur), Steel (Jermaine “Huggy” Hopkins”) and Raheem (Khalil Kain), 4 friends who are just trying to make it by in the urban gangster ridden inner city. Q is an aspiring DJ, while Steel and Raheem are just having fun. Bishop is the crazy one of the group and tends to get himself into a little bit of trouble now and again. The boys are up to the typical no good or bored teenagers, but mostly relegate their mischief to harassing a few store owners and playing arcade games down at the local hangout spot (run by a very young Samuel L. Jackson). That is until they decide to hold up a local business owner as payback for him giving them a hard time.

The holdup doesn’t work out exactly as planned, with the store owner AND Raheem ending up dead thanks to Bishop bringing a gun to the scene. Q and Steel are devastated by the loss, but this whole incident seems to have flipped a switch in Bishop. He’s cold, calculating, and seems to not have any remorse for the whole situation. Soon Bishop realizes that he doesn’t need the rest of his friends. He’s got the “Juice” now, and that juice is flowing directly to his inflated ego and a young crime lord is on the rise. One by one he starts taking out the remaining friends and witnesses, leaving only Q and he left to confront each other in a standoff that will only allow one to leave alive.
. 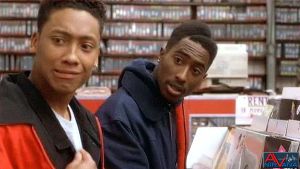 Juice seems to be glorifying thug culture at first glance. The boys are sympathetic villains, causing mischief and mayhem throughout the first half of the movie. Even Bishop, with his unhinged rants, is someone you can kind of rally behind. But upon further inspection you find out that is about as from the truth as you can possibly get. Underneath all of the 90s hip hop lingo, and bad 90s hairdos and cheesy gang signs, it’s a bleak tale of what happens when you lose all hope, as well as a harsh condemnation of the alluring nature of power on the street. What Bishop wanted was what ultimately destroyed him, and the power that he had was no real power at all. Instead it was a cancer that ate away at everything he touched, and everything he was.

While I loved the film as a kid, Juice IS dated quite a bit with the 90s hip hop lingo, hair dos, 90s rap music and the like. The film is so intense, but almost comical at times, even though I know it really shouldn’t be. It’s a curse of immersing the film in an era that was iconic for it’s over the top culture that gave rise to a whole host of rap icons. With that being said, there are some incredible performances given. Omar Epps proved himself a rising star with this one, and Tupac Shakur is amazingly visceral in his performance. I’m not usually a fan of rappers (or singers in general) taking their go at an acting career, but Tupac was so believable in the role of Bishop that it’s really hard to see him as a singer/songwriter than as a well-versed actor in this role. I personally am not a fan of the man in his life, but I have to admit that he was a talented man, and was able to pull off a solid performance.


Rated R for strong language, and for some violence 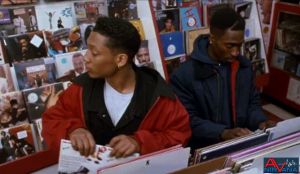 Judging by the image Paramount is using the new remaster that Juice used for the 25th anniversary Blu-ray when it came out, and that means a very nice looking 4K UHD disc. There’s some nice textural upgrades with a more stable grain pattern, as well as nuances on walls, or the fibers on the boys jackets showing up a bit better. The HDR application really does the best with visual upgrades, as the 1990s style rustic reds and blacks and blues just pop off the screen. The image was always a bit grungy to mimic the street elements of the film, but things like jackets, or green painted walls really do look impressive. Black levels are excellent as well, although it sometimes looks a bit murky in the shadow department. Something the Blu-ray had issues with as well due to the grading. The only real major downsides to the picture is that grain can sometimes spike and clear up from scene to scene, and I noticed some backgrounds and shadow details looking a bit soft. Nothing wild, but again, noticeable. 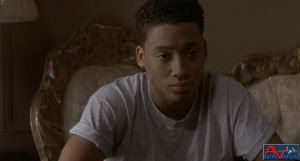 Being that this is a clone audio mix of the 25th anniversary edition Blu-ray that we reviewed in 2017, I'll simply copy that information below

The audio mix for Juice was never a powerhouse, or heavily immersive track, but the 5.1 DTS-HD MA experience that Paramount Pictures brings us is well worth the listen. Dialog is the main focus of the film, and the vocals are firmly planted in the center of room, with the front soundstage take the rest of the work (or at least MOST of the rest). It’s a front heavy mix, but there is quite a bit of surround nuances that come from the street scuffles, and the heavy club scene where Q does his turntable magic. LFE is tight and punchy, but never very noticeable until the end when Q and Bishop get into their final act conflict. The 5.1 mix doesn’t stand up to action tracks or the like, but it does everything asked of it without breaking a sweat and detailed enough to have me tip my hat to the mixers. 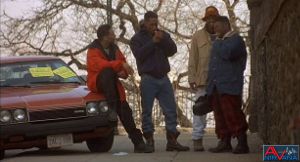 • Commentary by director Ernest R. Dickerson
• You’ve Got the Juice Now—A look back at the making of the film featuring interviews with director Ernest R. Dickerson, producer David Heyman and actors Omar Epps, Khalil Kain and Jermaine Hopkins. The piece details Dickerson’s struggle to remain true to his original vision, his desire to cast fresh new talent, the challenges of shooting on location in Harlem, and the reasons why the film’s ending was changed.
• The Wrecking Crew—The film’s surviving lead actors talk about how they came to be cast in the film and the bonds they immediately formed with one another. They additionally share stories about Tupac Shakur’s drive, authenticity and unmistakable genius, as well as their delight at getting to work with Samuel L. Jackson, Queen Latifah and Cindy Herron.
• Sip the Juice: The Music—Explores the essential role that music plays in the film. Features vintage interviews with the Shocklee brothers about their score, as well as Erik B, EPMD, and members of Cypress Hill speaking about their contributions to the unforgettable soundtrack and why they chose to be a part of the film.
• Stay in the Scene: The Interview—Vintage interview with the four lead cast members on set. The piece demonstrates their rapport as they discuss the importance of the film and its message.
• Photo Gallery—Unit photographer Adger Cowans’ photos taken on set.

​
As urban street thrillers go, Juice is actually one of the tamer ones if compared against films like New Jack City or any of Spike Lee’s movies. Even so, it’s a tightly done movie that has a singular focus and sticks to that purpose with dogged persistence. It was also the film that started Tupac’s short career as an actor. In terms of upgradability, that will rely solely on the video quality, as the extras and audio are clones of the 5 year old Blu-ray (which were already excellent to being with). One thing that Paramount has continued to do is to release their newer 4K UHD catalog titles as 4K UHD ONLY, without the Blu-ray included so if you had the Blu-ray already, it probably would behoove you to stick it inside this set to make your own combo pack.