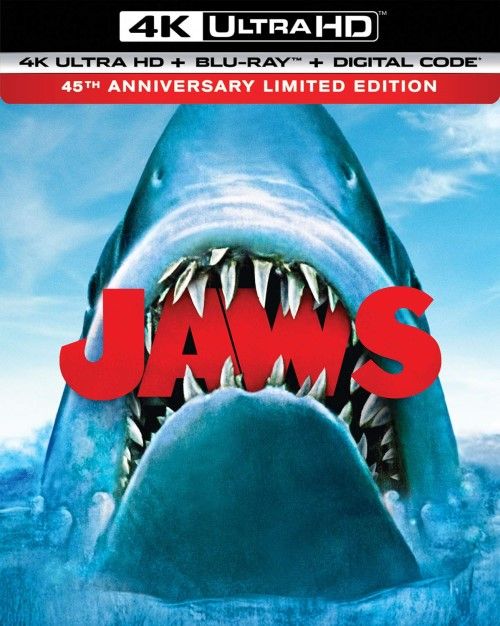 Movie
You ever have one of those phobias that you can’t rationalize, yet still are deathly afraid of? The ones that haunt your dreams and even embarrass yourself with when you actually think about it? Some people have irrational fears about spiders, some about drowning, others suffocating, but to me it’s sharks. I know it’s stupid. I know it’s an impossibility for the most part, but whenever I’m in the water (whether it be freshwater, a swimming pool, or at the beach), a single darting shadow flitting underneath me in the water triggers sharp jolting electricity up my spine and my lizard brain start going into full fight or flight mode, requiring my conscious brain to force down the irrationality and continue on. You know where that came from? It came from 7 year old me watching Jaws on TV when I was supposed to be asleep and getting nightmares from it (thanks also to my older brothers who also would play clips from the theme song on the cassette player just to mess with me). So some 33 years later, I have to smack myself around and suppress instinctual urges whenever I’m in deep enough water to not see the bottom.

That being said, Jaws is one of THE best shark movies to have ever been created, and widely considered the grandfather to all of these shark attack films we have today, like The Meg, Deep Blue Sea, The Shallows (one of the best shark movies since Jaws), and many more. Spielberg knocked it out of the park some 45 years ago, and it’s been widely hailed as one of his best adventure/horror works ever. I’ve owned the film on VHS, DVD, Blu-ray (twice) and now 4K UHD, and I have to say that they knocked this edition out of the park. It not only comes with a new 4K master, but a 44 page booklet that features images from the film, as well as notes and other little tidbits from Spielberg’s journey. And don’t forget an Atmos track to boot.

I’m sure there were giant event films back in the 1970s, but in 1975 the box offices saw a surge that had never been seen before, and wouldn’t be seen again until Star Wars came out 2 years later. Overnight Jaws became on of the largest smash hits that had ever been seen, with millions of people going to the theaters again and again as word of mouth got out. It was a juggernaut of a film, and the public went absolutely wild with it. Spielberg has seamlessly blended horror and adventure into one film, pushing the boundaries of the PG rating (today it would easily be rated PG-13), and capturing a shark attack in ways that no one had ever seen before.

The story itself is actually really simple. A fictional New England island town called Amity is subjected to a horrible tragedy. A woman ends up dead on the beach with obvious shark bites over her mangled corpse (that opening scene is still incredibly intense and disturbing, even some 45 years later), triggering police chief Brody (Roy Scheider) to shut down the beach. However, he’s stymied by the town board members who are desperate to keep the summer beaches open due to the revenue they bring the small fishing town. Naturally this leads to another death, one which prompts the chief to bring in marine biologist Matt Hooper (Richard Dreyfuss) in to ascertain what they’re dealing with. Hooper’s evidence is pretty conclusive. This was no accident, and no small beat. Rather a gigantic great white shark who has seemed to have made the New England coast his territorial feeding ground, and the most obvious food is all of the summer beach hounds who are splish splashing out in the water by the coast line. Now it’s up to Hooper, Chief Brody and a salty shark hunter by the name of Quint (Robert Shaw) to go out and kill the beast before it claims anymore lives.

What makes Jaws such an indelible classic is a mixture of intense storytelling, horror elements, good old fashioned adventure, and some of the best cinematography the world had ever seen. Much like First Blood, this is not a full on horror/gore film like the 3 sequels that followed. Instead it has some intense thriller elements in the first hour, with very VERY minimal gore. Everything is told through the lens of intimating, rather than showing chewed up bodies and blood everywhere (kind of like First Blood, which was a movie about a PTSD suffering soldier trying to integrate into society, before the sequels went balls to the walls with Arnie style action). What truly sells the thing is the cinematography by Bill Butler. He uses camera shots that play and tease the audience with the idea that something is around the corner (such as focusing on the upper torso of a boy rescued from a near shark attack, only to suddenly shift to his legs, leaving the audience to sigh with relief when you realize they’re still intact), only to softly change direction. A technique which ramps up the attention and tension of the viewer, only to let it subside quickly as they exhale with relief. Even the film’s infamous shark attack sequences in the latter “adventure” half of the movie still hold up well today. You can see some of the seams of the prosthetic and mechanical beast if you look directly in it’s eyes, but the movie never shows too much of the beast, allowing you to see it being fake. Ironically this little technique was not completely intentional by Spielberg. Back then creating a fully working mechanical shark was HUGELY expensive, so they were forced to only shot bits of the creature throughout the film, focusing mainly on the neck and head, which was easier to create.

Back in 2012 Steven Spielberg oversaw a restoration of the original film elements to create the 2012 “Universal 100th Anniversary” edition that we’ve had for the last 8 years. The Blu-ray was excellent (if not a little over brightened in my humble opinion), but was considered THE defacto pinnacle of the film’s home video releases at the time. Spielberg himself (considering he was heavily involved with the restoration) has gone on record as saying the Blu-ray looked amazing to his eyes, and I was really wondering how much more we could get out of that restoration considering the fact that the new 45th anniversary 4K UHD disc was struck from the same digital intermediate that the 2012 Blu-ray was.

The 4K UHD disc is absolutely STUNNING in 2160p, and I can’t see it looking any better than it does today. The afore mentioned over brightening of the Blu-ray disc is tamed here, with a slightly darkened image that isn’t as garish in the color or brightness situation. The HDR 10+ is amazing, showing very natural reds for the blood, and the Amity beaches are alive with bathing suits of every shade. The colors are well saturated, but not OVERLY saturated (something I felt the Blu-ray suffered from a tad), and the dimmer look really sells the grim look that the film takes during the night time shots (which infamously used day for night imagery. Imagery that isn’t altered or thrown off like Paramount’s butchery of To Catch A Thief from the new master). Fine details are exquisite, whether it be from the sweat and salt spray dripping off Brody’s and Hooper’s faces, or the lifelike look of the infamously problematic mechanical shark. Simply put, this disc is nothing short of a revelation, drastically improving on the already excellent Blu-ray, and making it the best catalog title in 4K I’ve seen in at LEAST A year.

Universal had already given Jaws a great sound 7.1 DTS-HD MA track for the Blu-ray (as well as kept the original 2.0 Mono track in a high bitrate DTS lossy encoding), but have tweaked it just a bit to give us the Atmos experience. After hearing the amazing 7.1 remix, I had full confidence that we wouldn’t have a botched Atmos mix, and I wasn’t let down. I will say this though, the 7.1 mix and the Atmos track are not that far off from each other. But rather the Atmos mix is a slight fine tuning of the 7.1 experience. There mono track source leaves little room to suddenly make this a massively light and overhead heavy track, but it still sounds fantastic. The overheads do get a little bit of activity with the sea water coming over and splashing down on the shark hunting trio, and the surrounds are always active with the exciting John Williams score. Bass is deep and punchy, and I noticed that the directional shifts are slightly altered for this release. Needless to say, still a great sounding mix, but thankfully Universal has included the 2.0 DTS-HD MA Mono track for purists as well.

• The Making of JAWS
• The Shark Is Still Working: The Impact & Legacy of JAWS
• JAWS: The Restoration
• Deleted Scenes and Outtakes
• From the Set
• Theatrical Trailer
• Booklet: 44-page booklet with introductions, rare photos, storyboards and more from the archives.

At the end of the day, Jaws is a true treat of a film that is one of the crown jewels in Steven Spielberg’s history. 45 years later it’s still tense, exciting, and full of some of the most quotable lines in cinema history. The 4K UHD disc doesn’t have any new extras on disc, but it DOES included a brand new 44 page art booklet, as well as a stunning upgrade on 4K UHD from the 4K master, and a new Atmos track that fine tunes the already excellent 7.1 track from the Blu-ray. Definitely a must own for any collector’s collection.

Awesome review. Can't wait to get my copy!!!!
T