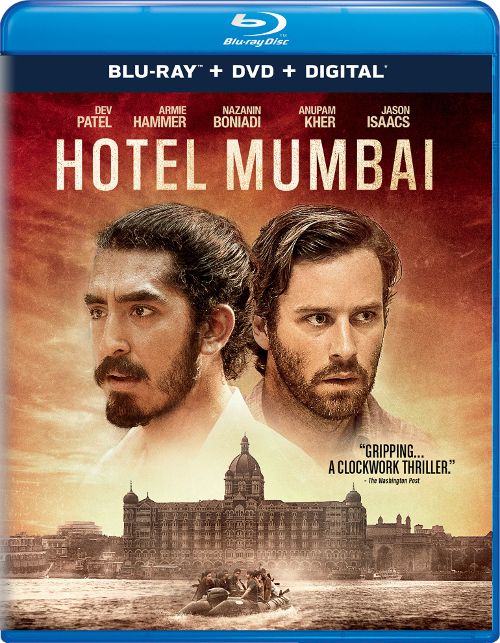 Movie
Hotel Mumbai was a movie that completely flew under my radar during it’s limited theatrical run (it isn’t a DTV film, but it only got very limited releases at film festivals and high profile theaters around the nation), and even when I received it for review I shook it off as another bland thriller that I wouldn’t get a whole lot out of. I remember hearing about the attacks on Mumbai back in 2008 (Mumbai has actually sustained massive terrorist attacks from their mortal enemies in Pakistan), and I was intrigued about the subject matter, but these films that don’t hit much theatrical release tend to be overly long and dray for my personal tastes. Those feelings of boredom and apathy were completely thrown out the window within the first 10 minutes of the film starting, as the movie is one THE most intense films that I have ever seen. 2 hours and 3 minutes later I could feel my heart just starting to stop pounding like a kettle drum and I realized that my hands were clenched so hard that I had actually cut my palms with my own nails. When I say that Hotel Mumbai is an intense film with a heart wrenching story, I truly mean it. The movie is not 100% perfect, but it is expertly acted, and it takes a horrific situation and turns it into one of the most harrowing accounts of ACTUAL heroism (not some sort of Die Hard fantasy heroism) that I’ve seen in all of 2019.


The film literally jumps into things within a matter of minutes. A group of 10 Pakistani terrorists infiltrate Mumbai, India, and target several high profile locations and being indiscriminately shooting and bombing in order to spread terror and death. Shooting up a train station, a restaurant and several other notable places, the terrorists finally focus in on the ritzy Taj hotel, which is home to rich diplomats, businessman and high profile citizens from all over the world. Striking without mercy, and without heart, the radicalized Islamic terrorists slaughter everyone they can see within the vicinity.


Splitting up into several sub stories, we get to focus on an American architect (Armie Hammer) and his wife and child, a rich Russian businessman who has a lascivious nature (Jason Isaacs), and a Taj Hotel waiter named Arjun (Dev Patel), we watch as the three day siege of the Taj Hotel plays out as each of these individual try to stay alive and out of the terrorists reach. Holing up in different locations, David (the architect) desperately tries to find his nanny who has his newborn baby boy, Dev and his fellow hotel employees keep the remaining survivors hidden in a small room off the edge of the hotel, and each of them prays for help as the Mumbai police are at a standoff with the 10 terrorists.

What makes Hotel Mumbai so intense is that it’s not only a true story, but that first time director/writer Anthony Maras doesn’t pull any punches with his portrayal of the terrorists. Most films try to humanize them in some way in order to gain a connection to our antagonists. There’s an attempt at trying to ground them and connect the audience to their cause, even if they are repulsive at heart. Instead, Maras pulls a complete 180 and portrays them EXACTLY as they would be. The terrorists are utterly evil to the core, with a lack of human empathy and emotion that shows just how terrifying and evil the radicalized ones really are. The film is incredibly violent, and while it may seem a horror movie in some ways, it goes a long way to painting the sheer brutality and animalistic nature of an attack of this magnitude. Watching the 10 Pakistanis show almost zero emotion while putting a round through a child’s head, or a crying woman evokes a sense of illness and revulsion in the stomach, and making matters worse is listening to their handlers on the other end of the line begging to hear the screams of the victims. It’s horrifying, intense, and completely sobering when you realize that there are people out there.


The really inspiring part of the movie is watching the various people putting their own lives in danger to help others. Dev Patel’s Arjun, and head Chef Oberoi (famed Indian actor Anupam Kher) working together to keep their guests sake is empowering and tear inducing, but also terrifying as you never know if they’re going to live or not. Even though you know how the attack ends if you have kept up with the original 11 year old tale, Maras holds no punches in attaching you to characters, starting to care for them, only to have them murdered in front of your eyes. Honestly, there is no telegraphing of who lives and who dies, as the randomness of the terrorists is portrayed with mercy or coddling of big name actors. The audience is constantly left guessing whom is going to make it out, and who is going to die, adding to the knuckle biting tension that is crafted throughout the movie.

Rated R for disturbing violence throughout, bloody images, and language

Using the typical Arri Alexa cameras and finished at a 2K resolution digital intermediate, Hotel Mumbai looks great on Blu-ray. The film is very heavily stylized, with a sort of sandy amber glow to the film that gives it a parchment type yellowed look. Lights are over exposed and give glowing halos, but there are moments of neutral color grading, such as in the hotel’s kitchen where everything is crystal clear and sharp as a tack. Still the detail levels are very impressive, showing the blood splatters along walls, the grime and sweat dripping down terrified victims faces, and even the shadowy areas look quite good (though I noticed some banding against cream colored walls and up in the night sky a bit).

The 5.1 DTS-HD MA track is quite impressive as well. The tonal quality is clear and cleanly replicated, with strong dialog up in the front of the room, and sweeping soundstage that makes great use of the mains and the surrounds to pinpoint little noises within the hotel. Shrieks and screams come through with heart wrenching clarity, and the dynamic range is rather massive. Gunshots thunder out with powerful authority, with the LFE lending itself to the grenade tosses and gunfire rat-a-tat-tatting all around the listener. It’s a wildly kinetic track and one that doesn’t hold any punches, much like the story itself.

Now, there’s a few issues with pacing in the center act, and the movie does stretch on a bit long, but this is a fantastic true life story of heroism and absolute devastation that is orchestrated by those who don’t value life in the least. What’s more sobering is the fact that the handlers who radicalized these 10 men are still at large, and STILL planning attacks against the Indian people to this day. Maras does a great job at creating tension, and the near horror level of violence actually allows a sobering sense of reality and terror into the film, pulling it away from the typical Hollywood fanfare and melodrama. The Blu-ray is exquisitely done in terms of audio and video, and there’s a solid array of extras on board the disc. This isn’t a film I’d show kids, but if you’re not squeamish, this is one of the better true life stories of surviving a terrorist attack in quite some time. Great Watch.

Thanks for the review I will wait for Prime/Netflix to watch it.

I vaguely remember seeing/reading about this flick at its release (perhaps saw a trailer in the theater?).

I'm putting this on my list... is it technically a foreign film? Or originally released outside of the US?

it was a U.S. / Australian production

This one is on my list. My kind of movie.

Looks like a good one here... very interesting.
N

Bummed Redbox only has this in DVD. Will hope we get it on one of the movie services soon.

NoUDont said:
Bummed Redbox only has this in DVD. Will hope we get it on one of the movie services soon.
Click to expand...

I know Redbox has some movies on dvd only. I guess it's their way of making you stream it.

Thanks for the review. I will look for this on amazon prime/netflix.

I finally got the chance to see this movie. Wow, thriller it is from the start.

I enjoyed the film

I actually got a bit emotional on a few scenes, very sad tragedy that happened and I feel for the victims.

Watched it last night, but I found it lacking. I suppose because it was a true story and they were trying to follow the facts rather than make it a fiction movie. I was waiting to see more heroism from some of the main characters, as in one or two of them ganging up to take down one of the gunmen and slowly work to kill the other 3, but it never happened. The one American did try once, and got shot. The others were pretty much always running and hiding. Of course in real life, we never know what we might do in a situation like they were in, so I certainly can't find fault with the facts, but for me, it just didn't make that great of a movie as it might have if it were fiction and they had changed the storyline a little. However, I realize that was not what they were trying to accomplish.

Yeah, obviously, it isn't an action type of movie where the hero takes down each person one by one and somehow survives at the end of the movie untouhced such as "Under Siege".

In real-life, folks are just trying to survive and escape the tragic events.

Here, especially, the government failed to send special forces in a timely manner and the folks had to figure out how to get out in the meantime without any weapons or any tactical knowledge of who and how many of the bad guys were in the hotel..
Last edited: Jan 27, 2020
You must log in or register to reply here.
Share:
Facebook Twitter Reddit Pinterest Tumblr WhatsApp Email Share Link