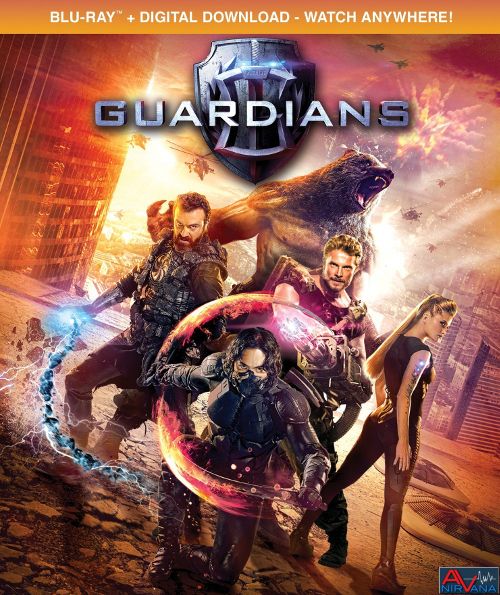 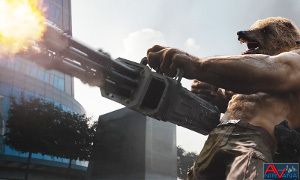 Movie
For those of you paying attention, yes you have seen this cover photo before. Shout Factory actually released the film on DVD (which I reviewed HERE ) almost 3 months ago to the day. Naturally the writeup for the film will be identical (and just as hilarious) with the technical specs getting a nice boost to HD and an included digital copy from the boutique label as well.

Ahhh yes, Russian film making. If you’ve never watched a Russian action, sci-fi or superhero movie you’re in for a real treat. There’s nothing quite like them in the world, and while The Guardians looks like it’s one of those Asylum knockoff films of Guardians of the Galaxy, it’s actually a bizarre superhero movie that rips off countless Marvel movies in it’s insane rush to their own version of a blockbuster. If you haven’t seen their sci-fi films, be warned that they use plenty of cheap CGI, and weak acting, but it looks leagues better than most of the DTV sci-fi films from the U.S. due to them putting a lot of effort into them (despite the lack of a worldwide theatrical run). The Guardians is one of those movies that feels like an amalgamation of Guardian’s of the Galaxy, Captain America, The Avengers and a weird take on The X-MEN while mixing in a healthy dose of Russian stoicism to make one of the most awful, hilarious, and incredibly entertaining sci-flicks I’ve seen in a while.

Well, there’s really not THAT much of a plot here. At least a plot that we haven’t seen before. The film starts out with a historical flashback that sets the background for what’s about to happen. A Russian super soldier program was created back in the 1970s under the direction of Dr. Avgust Kuratov (Aleksandr Komissarov), but things went horribly awry. Dr. Kuratov was working on a device that would allow someone to control all things electronic with his mind when a terrible explosion injures him during an experiment. The explosion altered the twisted Dr.’s DNA, making him incredibly strong, and a bit of a sociopath. Escaping into the night the super secret project (titled PATRIOT) is shut done, but years later the mad Dr. comes back into the limelight. Stealing military equipment in the present day, and in possession of his completed electronic controlling device, Kuratov plans to take over the world. A goal that the Russian government can not allow to happen.

Putting Major Elena Larina (Valeriya Razbegaev) in charge of PATRIOT, the government clues her in to the fact that Kuratov is not the only super powered being. He had created a host of other mutants who have vanished off the face of the earth and it’s up to the Major to find them and form them into a fighting force that will be able to take down the mad scientist. Bringing together the 4 that she can find (A werebear named Arsus, Lernik the telekinetic rock man, an invisible woman by the name of Kseniya , and a Khan, a super fast ninja with speed near teleportation levels). Together they have to find a way to control their powers and take revenge on the Dr. that created their curse so many decades ago.

Let me start this out by saying that there is NOTHING new in The Guardians. It’s a hybrid of most every Marvel movie out there, and you can tell that they tried REALLY hard for this to be a full on series. The last few moments of the movie reminds of very strongly of The Avengers, where the group of super heroes fades off into the darkness, but with hints that there are more adventures to be had in the future where they will need to team up once more. The first few minutes of the film had me wincing in sheer terror, but that terror fades away to a bit sloppy grin over the face as I realized that this was shaping up to be the next Iron Sky, just with Russians instead of German. The Russian superhero flick takes itself RIDICULOUSLY serious, with that straightforward stoicism that the Russians have, combined with the insanity of Mexican Telenova TV (just without the bikinis and random Benny Hill comedy). I mean, how can you not laugh when a group of superheros comes together and we have one of them who can turn into a full on Russian bear, carrying a telepathically controlled pair of shoulder mounted gatling guns!? I want that to sink in for a moment. A bear, carrying a gatling gun, that is controlled by his mind. Yes, you read that right, you can’t make this stuff up. Then there’s a man who can control rocks and is outfitted with an electrically charged rock whip, a girl who turn invisible, and a ninja (In Russia) that can move faster than lighting. Yes, you’re in for the craziest superhero movie that you’ve ever seen.

The increase from DVD to Blu-ray is quite substantial, and the low budget Russian superhero film looks very nice on Blu-ray. The digital shoot is clean and clear of most artifacts, showing off some shiny neon blue and black colors that most of these films seem to be saturated with. There’s the standard dodgy CGI that looks cheap and awekward, but the gray and blue looking imagery is accurate and precised, with only some washed out black levels to keep it from being excellent. The detail levels are more than satisfactory, and despite the dodgy CGI which depletes some close of up detail levels as t hey try to blend the real world with computer generated images, it looks overall pleasing. Especially for a DTV foreign film.

Like usual, Shout gives us the options between a 5.1 DTS-HD MA mix and a 2.0 DTS-HD MA track, but we also have those choices in both English and Russian as well. The English track is going to have to be one that I ditch completely as it is PAINFUL to listen to in regards to the dub. It sounds like a couple of guys got together on a Friday night and recorded it in a jam session then called it a day. The Russian one is still cheesy as all get out, but that over enthusiastic cheese helps add a bit to the charm of the film as well in my opinion. It sells the hilarity of the film as everyone is trying to make this the most super serious super hero movie ever, and you can’t help but giggle at the thought. Now, I had an issue with the DVD track where the mix felt muddy and claustrophobic during action sequences, and I can confirm that the Blu-ray sounds the same well. It appears the master mix was cooked way too hot, and the action overtakes much of the dialog and is stressed a bit. The English track sounds a BIT better in that regards than the Russian, but it is still present. Surrounds are used well, with lots of action swirling around the listening position, and the bass is just devastating. Every turn seems to be loaded with super hot bass that just bounds the listener back in the seat. The dialog is well placed in the front and perfectly intelligible at all times, and the whole sonic sound field is much richer and more expansive than the loss 5.1 Dolby Digital track of the DVD from 3 months back.

The movie is NOT good, but The Guardians is so ridiculous and hilariously serious that you just can’t help but giggle along. The special effects are pretty solid for a DTV film from a nation that is NOT known for making high quality films, and the acting stiff and wooden. Remember, in Russia, Superheroes Movie YOU! Ok, you get the idea by no. This is a completely crazy flick that really isn’t going to win over many people, except those willing to just have fun with the insanity. I have no idea how Shout Factory got ahold of this one, but I’m actually rather glad they did (supposedly the Blu-ray is being released in December), as it was a great change of pace from the indie flicks and standard fare blockbusters that have been saturating my review cycle the last month or so. While I can’t recommend it on a technical level, The Guardians is a fun watch that really must be seen to be believed. Audio is ok and Video very solid, and there’s even some fun little interviews with the cast that are worth checking out if you can get your hands on the disc.

Thanks for the review. I am interested in this one after reading about this..

it's hilariously awful/awesome.... How Shout Factory got their mitts on it i'll never know, but I laughed till my sides hurt