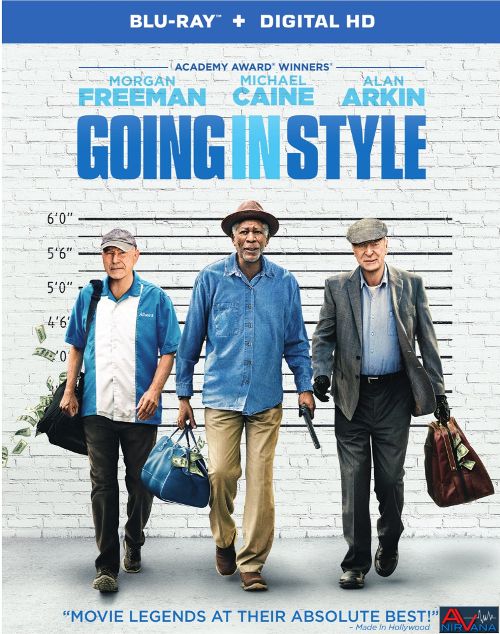 Movie
You pretty much can’t throw a stick anymore without hitting a remake or reboot of some old film these days. Hollywood seems to be going on a binge of remaking everything in sight, but color me surprised to find out that they were remaking a little known 1979 film called Going in Style. Back in 1979 the original starred George Burns, Art Carney and Lee Strasberg as three old coots who want to rob a bank as they have nothing left to lose. The 79 film was an ok film back in the day, but as with many of these forgotten movies go, they lost their appeal and aged rather poorly. I still remember yanking out the VHS about 10-15 years back and realizing just how badly the film had aged. There was a reason why time has pretty much forgotten it as one of George Burns’ weaker entries. So naturally, I was a bit hesitant when it was announced they were going to be remaking it with Michael Caine, Morgan Freeman and Alan Arkin. However, I was pleasantly surprised to see that it actually surpasses the original film in many ways and throws a new twist onto the subject matter. Going in Style 2017 isn’t going to make waves , but it is a solid remake that is lighthearted enough to crack a smile, and somber enough to keep it from becoming a bit too stupid.

Willie (Morgan Freeman), Joe (Michael Caine) and Albert (Alan Arkin) are living in their twilight years. They have been friends for most of their life and worked at the same steel company for their adult careers. Now they’re living off their meager pensions and social security when it all comes crashing down. The good old steel mill that they spend 30-40 years of their life at is being merged with another company, and as a result of outsourcing to overseas they can get away with liquidating all of the employee pensions due to a legal loophole. This leaves Willie, Joe, Albert, and the rest of the retired employees up a creek without a paddle. Willie is on dialysis and needs a new kidney, Albert won’t be able to make rent, and Joe is in foreclosure after he was bamboozled into a reverse mortgage thanks to a sleazy banker.

So, with nothing left to lose the trio decides that they might as well rob the very bank that is handling the liquidation of their pensions and gain back what’s rightfully theirs. Problem is, they’re not exactly spring chickens anymore. Pushing 80 years old you don’t just walk in and rob a bank and expect to dive out the back door in a matter of seconds. Plus the trio are not exactly criminal masterminds. Luckily Joe has a few connections in that industry due to his daughter’s low life ex-husband, which lands them a “consultant in the criminal arts” named Jesus (John Ortiz). With his skills at training, and a lifetime of combined brain power, the three old geezers set up the heist of the century.

The original Going in Style was not something that will bowl you over, and really the remake won’t either. HOWEVER, the remake DOES have some really fun things going for it. Zach Braff (yes, that Zach Braff, of Scrubs and Garden State fame) is behind the wheel, so you know it’s not going to be your typical comedy. Surprisingly Braff doesn’t fall off the wagon and go into straight surreal art house like I thought he would. Instead he infuses a standard fare comedy with just enough quirkiness to make it difference, but not enough that it would end up being off putting to average audiences. Freeman, Caine and Arkin are wonderful together, showing a chemistry and comfort level between the three men that comes from decades of experience working together.

The film does fall short in many ways though, and that is especially true with the script. The plot of Going in Style is nothing new, and that tends to be a weak spot, as the tried and true comedy tropes feel a bit too generic at times. We already know how the film is going to end before the movie even starts, and although the final act IS pretty well done, that predictability is one of the downsides to the film. Don’t get me wrong, I certainly had fun with the film, but it doesn’t really blaze any new trails either. It’s a solid watch, and there’s quite a bit of fun to be hand, but not every joke hits, and not every character is as charming as our trio of leads.

Rated PG-13 for drug content, language and some suggestive material

Shot on the Arri Alexa cameras (what isn’t these days) and given a good 2K digital master, Going in Style embodies the standard of excellence that most modern day films are able to achieve thanks to digital technology progressing as far as it has. The film opens up with a decidedly yellow tinge to the picture, but then settles into a slightly more natural color grading for the rest of the film (although that yellow tinge does seep back in during a few scenes). The New York city landscape is handsomely replicated with great detailing, and the facial shots show everything with impunity (sometimes showing a bit TOO much considering the actor’s ages). Blacks are healthy for the most part, but that yellow tinge can give them a sickly look from time to time. Contrast is a tad warm, but skin tones are fantastic. Overall, a very typical and lovely looking encode that seems to be more and more the norm these days.

The 5.1 DTS-HD MA track follows the same pattern as the video encode. Going in Style is a comedy, and as such it is mainly front heavy, but very capable of dishing out whatever is needed with ease. Dialog is crisp and clean, and the surrounds get a little bit of workout during the bank robbery and with some of the city street ambient noise. LFE comes in with the score, as well as adding some oomph with the gunshots during the “shootout”, and even drops a few heavy beats near the end of the movie. The 5.1 mix isn’t meant to compete with an action film, but it is crisp, cleanly replicated, and very precise given the style of film. Simple, but very solid and very effective.

Going in Style isn’t going to win the Academy Awards for best comedy of the year, but it’s a fun little romp with some old (in this case quite literally) friends. The chemistry is great between the three major leads, and Zach Braff handles himself well, actually handling a straight forward comedy a bit better than I expected. It’s cute, and got heart where it counts (even though some of the tropes are a bit well worn). The Blu-ray itself looks and sounds great, and I really can’t see any negatives to the package besides some minimalistic extras. Not a perfect movie, but still fun enough for a solid watch.

Thanks for the review. I never heard of the original or this one but will check this one out.

tripplej said:
Thanks for the review. I never heard of the original or this one but will check this one out.
Click to expand...

it wasn't a wildly popular film, and I don't even think it's available on DVD... enjoy the remake buddy

I was able to find the original on Amazon website..

I maybe able to find the original at the public library. They have a lot of very old movies..