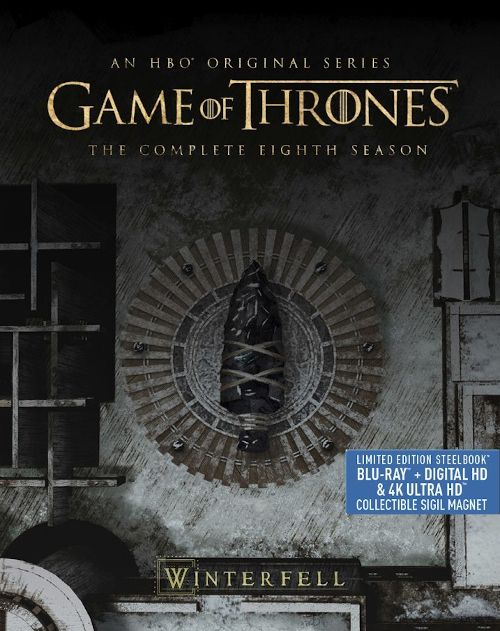 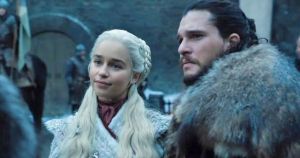 Movie
Nothing is more terrifying for viewers (and most likely creators alike) than the final season of a good show. In fact, the better the show the more nervous we are about it’s ending. When a good show ends the viewers are satisfied with a good ending, but when a show has spiraled into the heavens and reached peaks never seen before (well, at least not seen for many a year), then the stakes are exponentially higher. Game of Thrones has been THE show to beat for the better part of a decade, as it basically revitalized the Cable TV market into the more “mature” market that it is today, and reinvented intricate and serialized plots that could do more than just pull off an “episode of the week” style of storytelling. Most of us saw the minor chinks in the armor of the show after the series passed the time line of George R.R. Martin’s novels, but most of us hoped for a satisfactory ending after the jaw dropping season finale of Season 7.

Unfortunately the 8th and final season kind of sucker punches the viewer, and pulls off one of the biggest faux pas of television production. Making a season that just isn’t mediocre and unsatisfactory, but one that actually enrages the fan base for how out of left field it is. Many of you may remember How I Met Your Mother, a show that was considered one of the better sitcoms of the 21st century, only for the ending to come out of left field and completely undermine what has happened before. Sadly this is what happened with the final season of Game of Thrones, as the writers altered character motivations, whole characters themselves, and seemed content to let a myriad of smaller plot lines just fizzle off into nothing at the expense of wrapping up the lives and deaths of the main characters in rapid fashion. 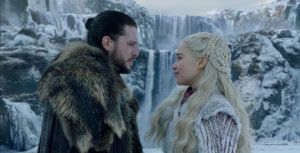 Could it be that there was not enough budget or time to finish off everything properly? Could it be that the writers were in over their heads (by all insider accounts that is a strong possibility),? Who knows, all we can say as viewers is that the 8th season feels like a slap in the face for all of the viewers who have stuck around for all 8 years. NOOOOOOOOW, don’t get me wrong. This final season is not some irredeemable trash for a show ending. Many of the main plot points get wrapped up, and the battle of Winterfell is an incredible bit of storytelling. It’s just that many of the main characters motivations and changed personalities felt so incredibly alien to long time watchers. (small spoiler) Dani’s change to the mad queen was sort of hinted at for the last several years, but it was literally as if a light switch was changed within her, and she abandoned all remnants of what we have seen for the last 7 seasons, and does what the story wanted to do in order to fulfill her “destiny”. The same thing can be said for Jon Snow, who the story completely lets down in terms of finalizing his character arc of “King beyond the wall”. They hint at it during the final moments of the final episode, but it’s a rushed bit that could easily be missed if you don’t think about it. It’s as if the show runners just tacked it on there because they ran out of time to fully flesh it out.

On the flip side of things, the meeting of the council for the new king was exquisitely done. I had a sneaking suspicion over the last couple of years that that particular person would become the ruler of the iron throne (or what’s to replace the iron throne), and it was extremely satisfying to see said person ascend to their rightful place. Peter Dinklage once more steals every scenes as the Hand of the King (or Queen in this case) and his particular arc is probably the most fruitful and satisfying according to what has come before. 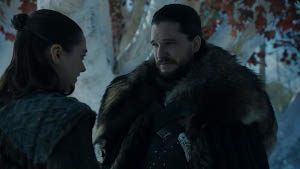 The 4K UHD set looks stunning in full 4K , and while the show is definitely bathed in a cooler chromatic tone (heavy swaths of blue), the show renders fine details exquisitely. The first 3 episodes or so are just drenched in deep dark blacks, so much so that the cinematographer had to come forth after the show aired and defend his decision to make the battle of Winterfell so incredibly dark. This look really stress tests the black levels of your TV, and even though it’s incredibly dark, I never once felt that the image was robbed of major detail. There’s some VERY mild black crush on clothing during those dark episodes, but even still, there’s a shocking amount of detail to be scene throughout. The rest of the season is much more light and bright, but there’s still a heavy blue chromatic push to the look. All in all, this is an excellent 4K disc to match the excellent Blu-rays included in the set as well. 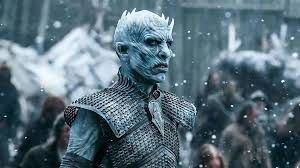 All of the series has been redone in Atmos, but the last 3 seasons have all been given Atmos tracks from the get go, and this year’s mix is actually one of the more active mixes the show has seen. It could be because there is just so much action in the final season, with non stop battle leading up to the final episode, but this is an impressive mix with strong overhead and surround usage. The sound stage makes use of several discrete and ambient noises such as dragon wings flapping overhead, or the whistling of arrows as they fly through the sky. The dialog is always perfect as can be, and the dynamic range can have you straining to hear a soft whisper one moment, only to be holding on for dear life as the sound of Dani’s dragons lay waste to an entire city. The bass is guttural and deep, pounding away with the tense score that Game of Thrones is known for, as well as the copious battle scenes giving ample room for low end thump.
. 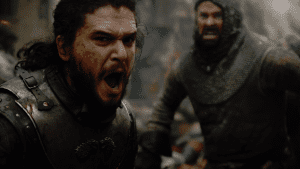 • Game of Thrones: The Last Watch: A documentary featured on DVD in two parts by filmmaker Jeanie Finlay chronicling the making of the final season.
• When Winter Falls: Exclusive 30-minute featurette with showrunners David Benioff and D.B. Weiss, along with major stars and behind-the-scenes players, breaking down all that went into the colossal filming of the "Battle of Winterfell" in Season 8, Episode 3.
• Duty is the Death of Love: A compelling look at how the team behind Game of Thrones and its major stars, including Kit Harington, Peter Dinklage and Emilia Clarke, brought the show to its conclusion in the series finale, "The Iron Throne."
• Audio Commentaries: 10 Audio Commentaries with cast and crew, including the show's creators, Benioff and Weiss, on the final season.
• Deleted and Extended Scenes: 5 never-before-seen deleted or extended scenes from season 8.
• Histories and Lore: New animated pieces giving the history and background of notable season 8 locations and storylines.

Game of Thrones: The Complete Eighth Season is not a train wreck or an abomination, but it certainly is a major let down after all of the incredible storytelling that has come before it. The writers appeared to have been over their hands, and instead of actually understanding and respecting the character arcs, just wrote the characters into whatever position they wanted in order to achieve the ending that they wanted. As such, this 6 episode finale to the giant phenomenon known as Game of Thrones fizzles rather than goes out with a bang. HBO’s technical specs for the 4K UHD set is not to be underestimated though. It carries a killer Atmos track, stunning video, and the 4K UHD set (only the second season to ever get the 4K treatment outside of the first season) is given a steelbook set to match the re-released steelbooks of the first 4 seasons with Atmos. While I hesitate to recommend this set based upon the merits of it’s quality, I will say this. Fans of the show will not want to leave one season missing from their collection, and most certainly will be happy enough with the tech specs to pick it up.

Recommendation: Not Great, but fans will need to see it

Thanks for the review. Will check it out from season 1.

Interesting there's mild crush... they've been dinged for that before on GOT releases.

I hope they release this entire show as a 4K box set... pretty sure that's not available, correct @Michael Scott?

I have never seen the series but after reading your review its disappointing. You'd think the final season would be excellent.
Last edited by a moderator: Dec 5, 2019

Todd Anderson said:
Interesting there's mild crush... they've been dinged for that before on GOT releases.

I hope they release this entire show as a 4K box set... pretty sure that's not available, correct @Michael Scott?
Click to expand...

you are correct. no 4K boxset. The released a Blu-ray boxset the day the final season was released, but only Season 1 and Season 8 have gotten the 4K treatment
T