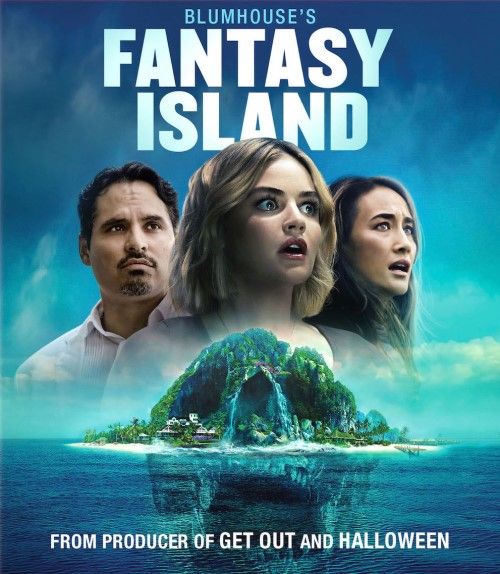 Movie
The 1978-1984 TV show Fantasy Island was an interesting piece of TV history. While it was certainly lighthearted TV fare with a fantasy twist, it could also get quite dark, in a Monkey’s Paw type of way. The show started Ricardo Montalban (famous for playing the original Khan on Star Trek: The Original Series) as Mr. Roarke, a mysterious caretaker of a mystical island that could grant people their fantasies. Most people don’t remember the show as it wasn’t a MASSIVE hit, but I still remember watching the old re-runs on classic cable TV. It was a fun enough show, and I was really curious how they were going to handle a feature film reboot that turned into into a horror movie. On one hand I was kind of miffed that they were going to turn a classic TV show into a horror flick ala the new Banana Splits movie (which was horrible beyond belief), but also very curious. The trailer looked like stupid dumb fun, but when you plaster “from the producer of insert famous movie here” on the front of the poster art, you get a bit nervous about the quality.

Luckily most of the film is actually quite fun. Notice I said “fun” and not “good”, as that’s really what it is. The movie is utter trash from beginning to end, but it’s fun trash that’s perfect popcorn material for the horror aficionado. That is, until the final act when things just go straight down the toilet and the film takes the easy way out with a cheesy ending that feels completely out of place with the rest of the story.

The story revolves around a group of people winning a vacation to Fantasy Island, a supposedly great place where you can just party and enjoy yourself. When the group gets to said island, they’re greeted by the mysterious Mr. Roarke (Michael Pena) who tells them that each of the people on the guest list is given their own personalized fantasy that plays out for their entertaining. However, as he warns, each person only gets ONE fantasy and that fantasy must play out to it’s natural conclusion. Party bros Brax (Jimmy Yang) and J.D. (Ryan Hansen) are given a party with babes (or guys in Brax’s case), drugs and all sorts of fun. Patrick (Austin Stowell) is given the military fantasy that he wants due to his father dying in Venezuela, Gwen (Maggie Q.) gets the opportunity say yes to a marriage proposal, and young Melanie (Lucy Hale) gets to take revenge on a high school bully (played b Portia Doubleday).

However, before long the guests start to realize that their fantasies are more than just a recreation. Everything is TOO real, and it’s not long before no one wants to leave their new realities. But as with all things too good to be true, it’s too good to be true. Their fantasies start going horribly wrong, and before long the guests are running for their lives as they try and try to get off the island alive.

As I said, Fantasy Island (the film) is pure garbagey fun. It may not be high art, but it’s horror/mystery fun that doesn’t ever take itself too seriously. The gore is pretty light, and even the unrated cut that we get is not THAT much worse than the theatrical cut (it’s like 15 seconds longer than the theatrical cut). It’s not really THAT scary either. While the film is definitely billed as a horror flick it’s more of an adventure movie with some horror elements. That being said, it actually works quite well for most of the movie. It’s fun, cheesy, and purely entertaining. That is till the last 20 minutes or so when the movie unveils the hidden “twist”. I’m not going to spoil the twist itself, and even that twist is not bad. In fact it was kind of expected from the genre of the movie. The problem stems from the fact that the end is just sugar coated and wraps everything up in such a nice and neat bow and comes off as so rushed that you’re left wondering if you watched the same movie. All of the tension, all of the kills, and all of the twists lead us to the big surprise, only for the script to just hurtle at light speed through the last 15 minutes or so of the movie and wrap it all up with a saccharine sweet ending. It’s hard to explain, but watching the final ending left me wondering if there were two sets of writers. One for the first hour and 20 minutes, and another who wrote the final 15-20 minutes. It’s that bizarrely out of place. 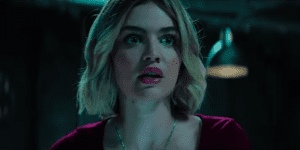 Sadly I only got the HDX (1080p) digital copy code from Sony instead of the 4K code, but since there is only a Blu-ray and DVD on physical media I can’t really complain that much. As is the case with digital streaming (this one was done through Vudu) I won’t be giving an actual score your internet connection plays a big part on how good the image looks. From what I could tell the image is really sharp and clean, with a blue tinge to the overall look. Faces are well balanced and skin tones bright and spot on accurate, while the darks are deep and inky. Daylight shots are stunningly clean and natural, and look very VERY impressive from the HDX stream.

The 5.1 Dolby Digital Plus track found on the stream is identical whether you’re looking at the HDX, the 4K or the 480p SD stream, so no fear about missing out on an Atmos mix from the 4K (like some studios do). It sounds nice as well, but rather mild on the bass. Some scenes like the grenade launching scene, or the gunfire when the soldiers attack the house get a bit boisterious, but the overall feeling of the track is kind of “thin”. Voices are crisp and clear though, and the surround activity is superb. You can hear creaks and groans on a floor in the background, or the drip drip dripping of the cave’s water. A solid track for sure, but also not sure how indicative it is of the physical release.

• (No Extras on the Streaming copy that I screened)

As a reboot of Fantasy Island the TV show, the movie just isn’t comparable. I would put it out of your mind and rather just enjoy the film for what it is. A Blumhouse horror/adventure movie that is pure popcorn garbage. Everybody does well at what they’re slated for in the film, but sadly the ending just undercuts the whole cheesy fast food guilty pleasure that is the first 2/3rds. That’s not to say the movie is unwatchable because of the ending, but it does add quite the damper. I really was liking the movie up until the last 20 minutes, and felt rather cheated with what we got from that point on. Still fun enough, but definitely weaker than it should have been. Solid rental if you like cheesy horror movies.

Thanks for the review. I actually remember watching the tv show along with "Love Boat" and "Chips" and all the other shows of that era.. I enjoyed it as a kid. I saw the commercial for this and thought no way.. After reading this review, I am somewhat interested so will only check it out on a lazy Sunday if it is available on amazon prime/netflix.

Thanks for the review. I too watched Fantasy Island and Chips back then and some Love Boat. I will rent this one.

Some fun shows back in the day!

This flick... ahhhhh.... probably won't be making an appearance here at the Anderson household.